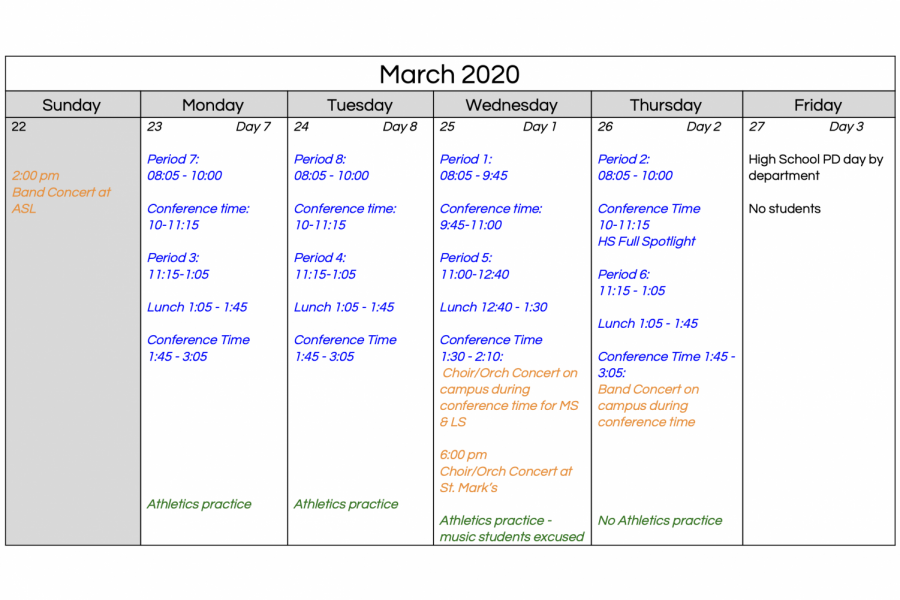 The High School administration released a schedule for the week of March 23. The annual Alternatives trips were planned to occur that week but were cancelled over concerns due to the COVID-19 outbreak.

The annual Alternatives trips, originally scheduled to occur March 23-26, were canceled due to concerns around the coronavirus outbreak. As a result, the High School administration planned a special schedule for that week, as students will remain at school instead of going abroad for Alternatives.

“It is designed to give our musicians the opportunity to rehearse and perform, for you to meet with your teachers and get extra help, and to be able to slow down and take care of yourself as independent learners,” she wrote in the email.

Each class in the adapted schedule has been extended to approximately two hours, and there will be an hour-long conference time between them. Classes will begin at 8:05 a.m. as normal and will end at 1:05 p.m.

The rest of the day is an optional conference time for students to study or meet with teachers, in addition to the morning conference time. Jaworski said that there may be non-academic activities during the mornings to create an atmosphere more like Alternatives.

“To have those long conference times means that students can … come together as a community and have some fun,” she said. “What we go out and do on Alternatives and Music Tour is very joyful and fun and community building, so we wanted to make sure we actually had time for that.”

The extended conference time will also give students an opportunity to catch up on work and meet with teachers in the lead up to AP exams in May.

“We want to give people the chance to do some individual work with their AP teachers if they want to … to be able to come in, do some extra studying, ask some more questions,” Jaworski said.

However, it was equally important to the administrations that the week be restful for students, especially since March tends to be a busy month.

During the week, students who were originally expected to go on music tour will instead have extra time to rehearse and perform for the school community.

“Wednesday and Thursday [on the week of March 23] after school, during that conference time and after school, are times when our young musicians are going to be performing and rehearsing,” Jaworski said.

The band will also hold a concert at ASL March 22 similar to their planned performance on Music Tour.

However, Jaworski said that no Alternatives-related activities have been planned for that week in lieu of the trips, although certain Alternatives groups may choose to organize events.

“We know that for teachers who worked really hard to plan their alternatives, there are some groups that would love to get together right now and plan something more,” she said. “For other people, that’s a really big ask given that they’ve just had to cancel so many things that they were really looking forward to.”

Meanwhile, as students will only have one period of each class that week, all homework assigned during that week would be due a week after.

Jaworski said that the new schedule for the week is an opportunity for students to relax, get ahead on work and help foster a greater sense of community in the High School.

“I hope that we actually can use this opportunity to build as a community, to be there for each other, to have fun together, and to … give ourselves the chance to breathe out, put our feet on the ground and take things a little bit slower for that week than we usually do,” she said.