When art crosses the line 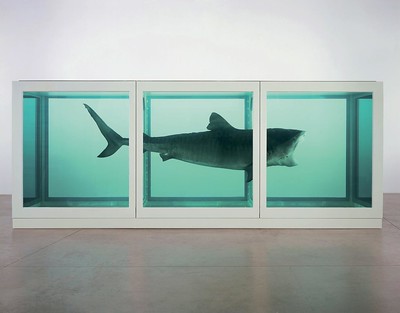 Photo used with permission from minhee.cho/flickr

“The Physical Impossibility of Death in the Mind of Someone Living”

When I first saw an image of “Brick Gun” by artist David Turner on BBC News, I was drawn to the article because of the captivating art rather than the harsh headline.

Upon first glance, I thought that the multicolored replica of a gun was supposed to be a statement highlighting the issues with gun laws in certain nations. For example, children and teenagers often face the repercussions of how easy it is to access guns in the U.S. due to factors like the lack of thorough background checks.

Since 2013, people have even been able to 3D print working guns; I assumed that the Lego bricks used to create the artwork were a nod to how accessible weapons are and the severity of this safety issue.

However, according to the associated article from BBC News, “Brick Gun” had instead received numerous complaints regarding its supposed glamorization of guns.

My initial impression of the art was the polar opposite compared to what a portion of its audience thought, but that does not make either of our opinions invalid.

After all, there have been numerous guns in various colors and materials depicted in art for years, yet I have never come across any being significantly campaigned against.

In the case of “Brick Gun,” despite the subjectively valid criticism it has received, there are no outright unethical issues that went into the making of the artwork, nor is it necessarily explicitly promoting the use of guns to children, as critics have claimed.

In contrast to the aforementioned work, some artists are instead creating their work using unconventional and highly questionable media.

For instance, one of artist Wim Delvoye’s most infamous types of work involves tattooing live pigs and piglets, which he first started doing in 1997. Delvoye is known for creating art for shock factor, though this art style skips that category and is instead straightforward cruelty.

Because the tattoos he inks on pigs are not what create the backlash, as many are colorful designs of characters and icons, this is not a matter of interpreting a deeper meaning, but instead of animal cruelty. These animals never asked to go through the pain that many people cannot even withstand.

However, what makes the matter more horrific is that, according to Culture Trip, Delvoye specifically purchased a farm outside of Beijing, China, where there are virtually no laws surrounding animal rights.

Evidently, he had to make a conscious effort to get away from other countries that could have given legal notice that his work is inhumane.

The same article also said pig skins are considered to be valuable in China. By purchasing an entire farm to fill with what will eventually become his canvases, Delvoye is essentially guaranteeing that he will create more of these problematic works.

Unfortunately, Delvoye is not the only artist who repeatedly practices cruelty for profit. An arguably more famous work, “The Physical Impossibility of Death in the Mind of Someone Living,” created by Damien Hirst in 1991 and last exhibited in 2012, displays a dead tiger shark preserved in formaldehyde in a tank.

While tiger sharks’ conservation status is not of immediate concern, they are still classified as “near threatened” by the International Union for Conservation of Nature and Natural Resources. Continuing to kill tiger sharks, especially for trivial uses such as art, does not help their status.

Furthermore, Hirst’s original version of “The Physical Impossibility of Death in the Mind of Someone Living” was not his first offense against the same species.

According to an article by The New York Times, Hirst sought out a second tiger shark to replace the original, which had decayed over time due to subpar efforts to preserve the work.

Art is entirely subjective when it comes to deriving its meaning and what it represents. However, when people or animals are exploited or harmed for the sake of a sale, the piece seems to exist for shock factor rather than a display of artistic expertise.

As one of the most successful and wealthiest artists today, Hirst has access to more audacious materials, some of which can be inappropriately obnoxious when showcased to the general public.

His work “For the Love of God” – one of the most expensive modern art pieces ever made – was created in 2007 using 8,601 diamonds and was last on display in 2015. Consequently, this work can be admired by many, but only a few can truly relate to the cost of its creation. Regardless of its meaning, the work appears to be a medium through which Hirst can flaunt his wealth to the masses.

Status can act as a toxic motivator for artists to continuously produce works that shock rather than display artistic talent or technique. England-based artist Banksy, whose fame primarily originated from his street art, hosted an exhibition in 2008 titled “Barely Legal.”

Surely enough, the title fits the content of the exhibition well, as one of the featured works was an elephant completely covered in paint. Despite the first application of paint being non-toxic, officials slammed the display at the time, as painting the elephant was deemed as unethical in the first place. However, confining an elephant to a warehouse in the middle of a city is where the problem starts, not painting the animal.

Forcefully removing an animal from its natural habitat can be likened to killing an animal, as both actions strip away its deserved livelihood. Just because an artist is not using dead or modified animals as a part of their exhibitions, does not make it humane, but could instead be considered even crueler.

Maurizio Cattelan’s “Enter at Your Own Risk—Do Not Touch, Do Not Feed, No Smoking, No Photographs, No Dogs, Thank you,” which was first exhibited in 1994 and last in 2016, involves a live donkey essentially living in the exhibit. Surprisingly, the first time the donkey was exhibited, according to ARTnews, it was evicted because it made too much noise and mess, not because of concerns for its livelihood.

We are so accustomed to considering animal cruelty only to be physical acts of harm against animals that we forget that how or where we force them to live their lives can also be constituted as unethical.

Art such as “Surrounded Islands,” by Christo and Jeanne-Claude in 1983, was not directly associated with living creatures. Nonetheless, the thousands of pink polypropylene sheets placed around the featured 11 islands in Biscayne Bay posed numerous environmental concerns due to animals –both endangered and not threatened – who need to either come up to or descend onto the surface of the water.

Many of these works, which I find to be unethical, are aesthetically pleasing to look at, whether it be because of their originality or because their shock factor adds a whimsical appeal.

Nevertheless, even if anyone’s interpretation of pieces created from ignorance is not necessarily offensive or controversial, they cannot deny the hard facts that lie behind each work. Artists trying to put lipstick – or tattoos, in this case – on a pig cannot mask the issues of their methodologies when “creating.”