L(e)aying Down the Law: The hypocrisy of Guantanamo Bay 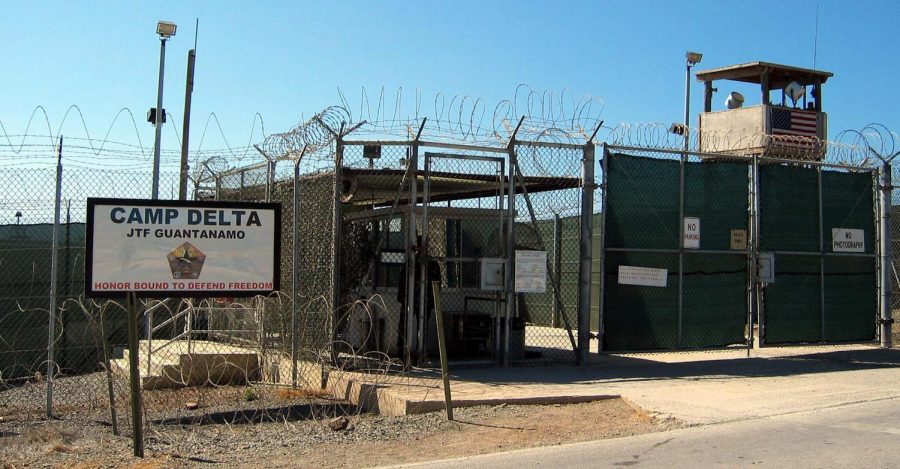 The Guantanamo Bay detention camp has been promised to be close for over a decade, yet is still open today.

Hi to whoever may be reading this! Welcome to the first article of my tri-weekly column, L(e)aying Down the Law, where I’ll be analyzing, breaking down and refuting some of the U.S.’s most controversial laws and aspects of its legal system.

The first subject I am writing about is Guantanamo Bay.

Guantanamo Bay detention camp is an American military prison stationed in Cuba. It was opened in 2002 by the George W. Bush administration in response to 9/11and the War on Terror. The territory of Guantanamo Bay was obtained in 1903 through a lease that the U.S. continues to pay to Cuba every year.  It was passed and legalized by the PATRIOT Act in 2001. The PATRIOT Act stood for “Providing Appropriate Tools Required to Intercept and Obstruct Terrorism Act.” Up until this day, it has held 779 detainees from several countries, including Tunisia, Saudi Arabia, Libya, and more. Currently, there are less than 100 prisoners left in the facility.

The facility was meant to act as a place where alleged terrorists could be sent and kept temporarily until a trial would be held in the name of their innocence. Unfortunately, those trials are far from what actually happens at Guantanamo.

After its establishment, it is evident to me that Guantanamo Bay must be closed for three principal reasons. One, because it is a direct violation of the Universal Declaration of Human Rights, as well as the U.S. Constitution. Two, it is a costly facility, and the money allocated towards it can be put to better use. And three, it has proven to be ineffective in combatting extreme ideologies and reducing terrorism, which was the prison’s primary justification for opening.

To decipher exactly why Guantanamo Bay should be closed for good, we must first look at why it was first opened. The prison was established as part of the U.S.’s fight against terrorism. It was meant to be a place of punishment that would hopefully deter potential terrorists from carrying out their crimes.

However, this is not what it has achieved. Rather, it has pitted these individuals further against the U.S., isolating them and pushing them to further extremes.

The extreme nature of Guantanamo Bay has been acknowledged by U.S. leaders themselves. The promise of the closure of Guantanamo Bay began 11 years ago when then-Senator Barack Obama vowed that Guantanamo Bay would be closed within the first year of his presidency. Despite being in power for eight years and having fought arduously for this to happen, the administration failed to keep this promise due to overwhelming bipartisan controversy.

So, the first and perhaps most evident reasons for the necessity to close Guantanamo Bay are the several violations of the Universal Declaration of Human Rights and of the U.S. Constitution that come from the prison. The UDHR was created by the United Nations General Assembly in Paris France on 10 December 1948, as a result of the Second World War. 48 out of the 58 countries that attended the conference voted in favor of the declaration, and of course, one of them was the U.S. Yet, almost 70 years later, the U.S. continues to violate two articles of the UDHR that it voted to protect.

First, article 5 states that “no one shall be subjected to torture, or to cruel, inhumane or degrading treatment or punishment.”

Guantanamo Bay is infamous for the methods used against detainees during interrogation or simply for punishment purposes. According to Business Insider.com, prisoners at Guantanamo are subject to waterboarding, sleep deprivation, confinement and more.

It is painfully evident that the methods of torture used in Guantanamo Bay are direct violations of the 5th article of the UDHR.

Moreover, Article 10 of the UDHR states that, “No one shall be subjected to arbitrary arrest, detention, or exile.”

Unfortunately, the purpose of Guantanamo Bay is to ensure that individuals are subjected to arrest, detention and exile. Article 10 also says that, “Everyone is entitled in full equality to a fair and public hearing by an independent and impartial tribune, in the determination of his rights and obligations and of any criminal charge against him.”

While it is true that the original intentions of Guantanamo Bay were for the facility to act as a temporary holding ground for suspected terrorists as they await trial, 18 years later, there are still detainees waiting for a trial they were promised.

And yet, if these human rights violations are not enough to convince the U.S. government to shut down Guantanamo Bay, perhaps the direct hypocrisy stemming from the Constitution of the U.S. would help. The Sixth Amendment of the constitution, in the 1791 Bill of rights states that, “In all criminal prosecutions, the accused shall enjoy the right to a speedy and public trial, by an impartial jury of the State and district wherein the crime shall have been committed, which district shall have been previously ascertained by law…”

This is yet another example of how the lack of legal processing in Guantanamo Bay contributes to the mass hypocrisy and injustice that this prison facilitates. In fact, in the case of Boumediene v. Bush in 2007, the Supreme Court argued that the Habeas Corpus rights of detainees were not suspended simply because they were considered to be an alleged enemy.

But, if justice isn’t enough, let’s talk about money. Guantanamo Bay is frankly, a massive waste of American money. According to The New York Times, it costs the U.S. around 13 million dollars per detainee to run Guantanamo Bay.

The U.S. is wasting its money on a prison that is not helping its cause at all. In fact, according to CNN.com, it would be less expensive to move these 40 detainees into a maximum-security prison in the U.S. than keep them in Guantanamo. It seems absurd to spend money on such a controversial and unconstitutional prison.

Combatting terrorism and extremism is a problem that the U.S. still faces today, 19 years after the War on Terror began. And yet, institutions and prisons like Guantanamo Bay are not the solutions. Instead, the U.S. should be focussing on de-radicalization programs that facilitate conversations and push extreme individuals to see their views as radical. There is no use in isolating individuals that may have dangerous or extreme mindsets as this will only push them further away. Rather, if we wish to combat terrorism and hate, this should be done in a way where justice isn’t compromised.

Whilst it is true that many of the detainees that were held in Guantanamo Bay were, in fact, incredibly dangerous people, I still wholeheartedly believe that their human and legal rights should not be stripped away from them. This argument is not a territorial argument. Some claim that Guantanamo Bay does not fall under the U.S. constitution as it is located in Cuba. However, so long as the prison is run by U.S. soldiers, under the command of the U.S. government, Guantanamo Bay will be subject to the Constitution of the United States of America. And, so long as Guantanamo Bay is open, the U.S. will continue to wallow in a hypocritical stance on human rights.