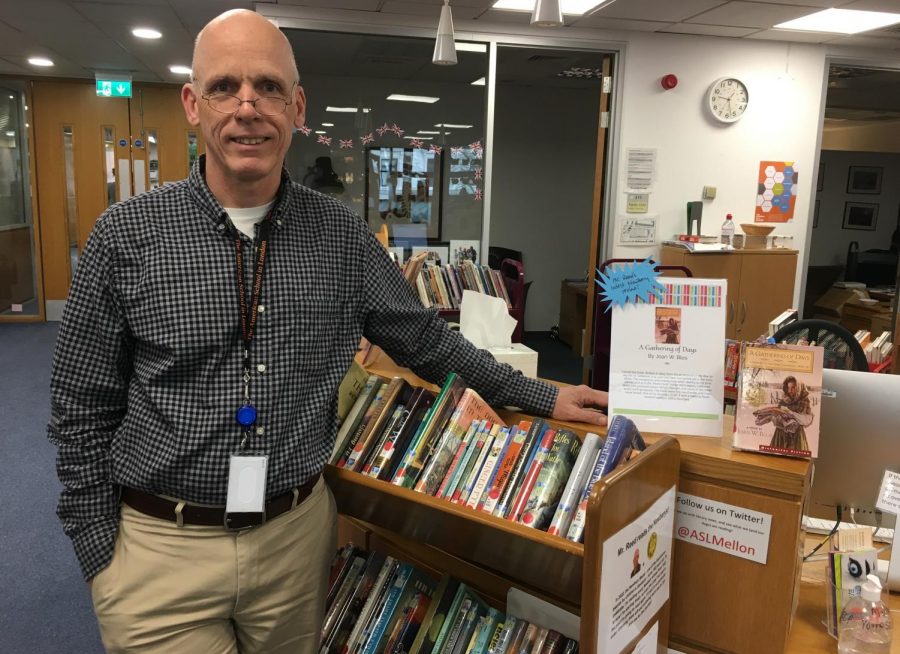 Library Administrative Assistant Steve Reed stands with the bookcase of all the Newbery Medal award winners. Reed has taken on the challenge to read all the winners since the founding of the medal in 1922.

On any day given day, Library Administrative Assistant Steve Reed is immersed in novels and newspapers.

“There’s a lot of reading,” he said. “It would be hard for me to say how much I read during the day, but definitely hours.”

In these past few months, Reed has taken on a new set of reading to tackle each day: 100 years of Newbery Medal award winners.

The Newbery Medal is a U.S. award, presented to authors who are judged as having “the most distinguished contribution to American literature for children” each year. It has been going on since 1922. Reed said that he’s made it a goal for himself to read the award winners from every single year after a debate with a colleague about the viability of the award.

“I was having a discussion in the library with one of the other librarians, and we were disagreeing about the Newbery Medal,” Reed said. “She doesn’t like the Newbery Medal …I have always found that they have been really reliable indicators of good books. So, she and I had this little disagreement and in the course of the conversation she said, ‘why don’t you read them all?’ And I thought, ‘oh my god, that is a great idea, I’ve never done that.’”

Reed has been reading them “in no particular order,” and said that it has been turning out to be a “really interesting exercise.”

Reading the Newberys has become more than just a personal hobby for Reed. Before the school closure, Reed had advertised his progress in the Mellon Library. There was a bookcase, filled with all the books, that also had a checklist marking how many he’d read.

“I’ve been trying to make it visible,” he said. “It is funny because people come up [and] they’re like ‘oh you’re doing pretty well,’ and it is kind of like running a race in some ways. I get pretty encouraged.”

Reed noted that he also was posting his own reviews and progress online.

“We have a blog that we created on the library web page, where people can see what I already read and read my little reviews,” he said.

For Reed, the project has been particularly fun when reading books he had read earlier in his life.

“It’s been fascinating to read ones that I read as a kid and see what it’s like now,” he said. “It’s interesting to remember how a young brain responded to [a] book versus how I do now – I see things in it that I didn’t then.”

“A Wrinkle in Time” by Madeleine L’Engle (published 1962) is Reed’s favorite from the ones he’s read so far. He said that he remembers reading it as a child.

“[It’s] probably one of the most famous of all Newbery winners,” he said. “It seems like one of these books everybody’s read. It is an excellent book.”

Reed also said that it has been intriguing to witness the range of skill levels children’s literature has had over the years. He pointed out “The Dark Frigate” by Charles Hawes (published 1924) as beyond what people would consider kids’ standards.

“That book is challenging even for an adult,” he said. “It is not an easy book, mainly because the writing style is very antiquated.”

Originally, he said his colleague had argued that the Newbery medal is “an award that is given by adults for books that are for children’s books that adults really like, and not necessarily the ones that the kids like.”

While not finished with all the books yet, Reed said he has actually been for the most part reassured that the Newbery Medal is legitimate.

“If kids are reading the more recent ones, those are generally pretty good, so I think it’s still a good indicator definitely,” he said.

The less favorable books are “few and far between” he said when looking at the winners across the years. He laughed about one book called “Miss Hickory” (published 1946) about a woman made of sticks.

Reed has also found a few gems along the way. He mentioned one book called “A Gathering of Days” by Joan Blos (published 1980), which takes on the style of the journal of a girl growing up in the 1830s in New England.

“I was very impressed by that,” Reed said. “[The author] got the language right, the way the people would write back then and it seemed very authentic to me, so I thought that was a fantastic book.”

For Reed, his project has been a way for him to try and connect with readers in the Middle School. He said he wants to encourage casual reading and hopes students will understand the benefits to sitting down with a book.

“There are so many values,” he said. “It’s a way to experience another reality, and it’s a way to empathize…, and I think creating that ability for people to empathize with people in another experience or another part of the world or another country is just an incredible thing. You really can immerse yourself in a whole different world.”

Reed encourages students to look past the label of children’s literature and explore what he said are some great books.

“High Schoolers would enjoy them too,” he said. “I mean I’m enjoying them as an adult, and the advantage to them is that they are generally pretty quick reads like you can sit down and read them in three days.”

The Newbery Medal running race is far from over for Reed. He said that if he doesn’t finish by the end of the school year, he’ll take a break over summer and pick back up for the 2020-2021 school year.