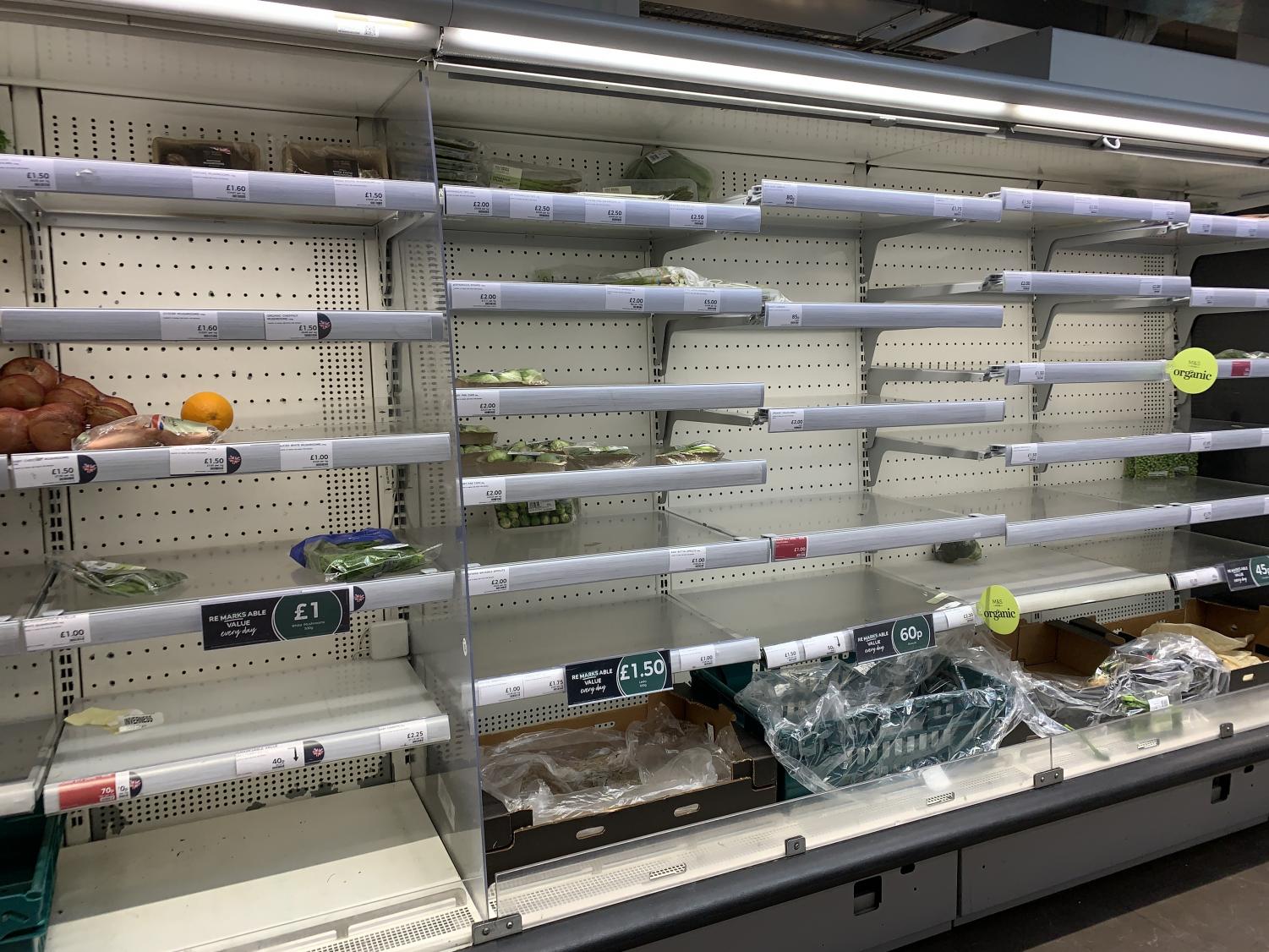 The aisles at the M&S in Earl’s Court are barren because of panic-buying . Some stores are adding item limits to combat the issue. (Isabelle Lhuilier)

The aisles at the M&S in Earl’s Court are barren because of panic-buying . Some stores are adding item limits to combat the issue.

“It seems to be something new every week,” Malachy Doherty (’21) said when describing products disappearing in stores.

“At first, it was toilet paper, and all the hand sanitizer was gone,” he said. “Then, for a week, I couldn’t find a single egg anywhere. Now, it seems like canned goods.”

This occurrence, in the wake of the outbreak of COVID-19, has been labeled by some as panic-buying. Ava Porter (’23) described the term as “buying everything you can see and not really thinking of what others will need.”

Porter’s family is attempting to stay away from panic-buying and purchase the same amount of groceries as before. However, they are seeing products they usually buy vanishing from the shelves.

“My family aren’t the people who are panic-buying because that’s not fair to everyone else,” Porter said. “But, we’re not getting the food that we would usually get.”

Ethan Snizek (’20) said he and his family felt the pressure to stock up on certain products so they could get what they wanted before it was taken.

“When everyone starts panic-buying, everything starts going, and then if you’re not panic-buying, all of a sudden, you no longer have access to stuff,” Snizek said. “So we kind of had to jump on the trend and buy a few things for around the house.”

Doherty said that people are stocking up with as many products as they can so that they avoid returning to stores as much as possible.

“Because of the virus, people don’t want to go to the shops too often, and they stock up so they can increase the time between each trip to the shop,” he said.

As for what they are buying, Porter said she notices that even meals for those with dietary restrictions, such as gluten-free, vegan or vegetarian diets, are purchased by others who do not adhere to those diets.

“If [those with dietary restrictions] are going to have a shortage of food, they’re not going to have as many places to turn to as other people can,” Porter said.

Similarly, Doherty said that this imbalance in what people are buying takes away from people who are not participating in panic-buying.

Likewise, Zarina Choudari-Stewart (’21) said that these kinds of consumers are not thinking about their impact in the broader community.

“What’s most important is to recognize that it isn’t just you alone in this, and there’s the entire world who is also affected,” she said.

Both Doherty and Porter said they believe this feeling of needing to purchase more goods comes from the news media and social media, whether that is headlines, articles or reposted pictures.

Additionally, Doherty said he thinks people are motivated by others who they witness panic-buying products and food, mostly via social media posts, instead of out of fear of the virus itself.

With the lockdown coming, there was a huge rush of panic-buying, and that included people lining up all day and buying hundreds of pounds worth of things.”

“They’re doing it because other people are doing it, and they’re worried that they’re gonna run out,” he said.

Consumers are left with some uncertainty, Doherty said, as they cannot predict what will be out of stock.

Snizek, who works at one of Provenance Butcher’s stores in Maida Vale, witnessed the draining of the store’s stock.

“With the lockdown coming, there was a huge rush of panic-buying, and that included people lining up all day and buying hundreds of pounds worth of things.”

This can also be true of online grocery services, such as Ocado, which has been experiencing technical difficulties due to increased website traffic.

Now, when placing orders, Doherty’s family has to wait in an extensive queue. Before, they would often purchase their staple products every month, like toilet paper, in larger quantities so as not to run out, but this isn’t possible anymore.

“[My mom] was on the Ocado website,” he said. “She wanted to just update her order and add one thing, but she had to wait two hours to even get onto the website.”

At Snizek’s work, they implemented a rule, like many other stores, where only two or three customers were allowed to shop at a time.

“It keeps it more civilized,” he said. “But at the same time, when you sit outside waiting for two hours and when you finally get in the store, you feel …  like ‘I got to buy a bunch of stuff.’”

Some consumers cannot easily access grocery stores or websites. However, Choudari-Stewart and her family are combating this issue by giving away pre-booked order slots and bringing supplies to elderly couples in her neighborhood.

“We’ve just been ordering food to our house and then leaving it onto their doorstep because it’s a bit difficult for them to use the internet to do the ordering for themselves,” she said.

Along with helping others, Choudari-Stewart said she believes that people should recognize the values they share with others at this time.

“It’s a time of terror, but in that terror, there is love and compassion,” she said. “Although there is panic-buying and although there are some negative sides, people can rise up and just show that we are a community, whether it be in the ASL community or in the area you live.”