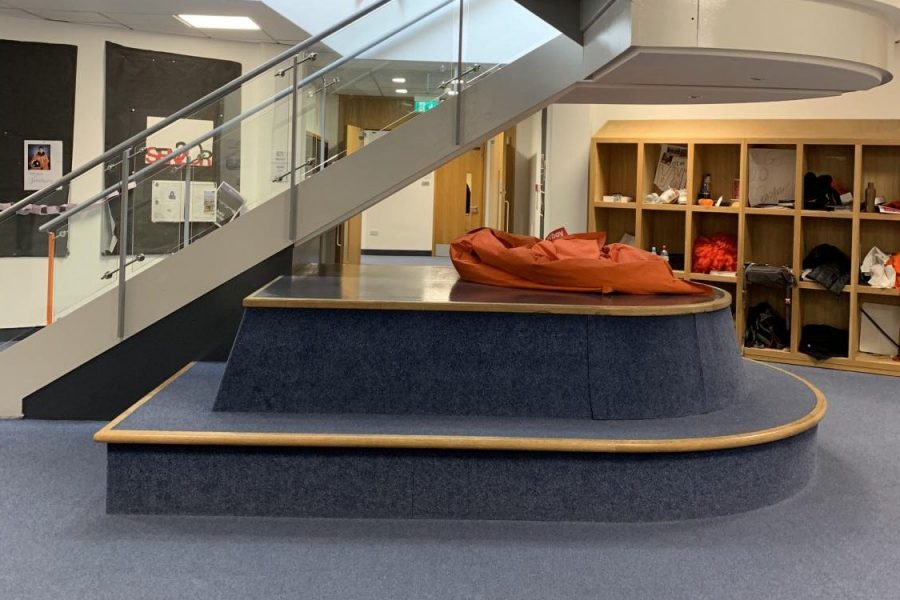 After reading the email that school would be closed until April 17 due to COVID-19, and likely long after that, Laura De Beer (’20) burst into tears.

“I started to cry immediately because the last Thursday that I had was such a bad day,” she said. “I didn’t get to talk to as many people as I wanted to and I was busy all day trying to get things done. Teachers were stressing us out by giving us all these materials before and just in case. It was just not a fun day.”

However, Russell Cornelius (’20) initially wanted school to close. Yet, he soon realized that this would not be time off school or as “fun” as he first thought.

“I thought it through more, and the reality is that we’re just going to go home and do school work except we don’t get to be around other people in our grade and don’t get to hang out with our friends,” he said.

While Maya Bajpai (’20) knew school was going to close eventually, she was surprised by how quickly it actually did.

“I had a feeling it was gonna happen at some point but I think the abruptness of one day being at school and everything being normal and suddenly hearing we are out for a month and a half was a huge shock,” she said.

De Beer said that, thinking optimistically, school could reopen at the end of May, but the most likely scenario would be it remains closed for the rest of the semester.  For De Beer, the thought of missing out on the rest of her Grade 12 year is extremely upsetting.

“Senior year is a year you wait for your entire life,” she said. “You see all these seniors, and you look up to them and you just wait for your year. Senior year is the year that you really get to know everyone much more and on a much deeper level because it’s your last year together.”

Cornelius has also looked forward to senior year, in particular being a second semester senior.

“Second semester of your senior year, especially around this time, is the best time of senior year,” he said. “As someone who’s been here since K1, there were a lot of [aspects of being a senior] I’ve been told about my whole life … I feel sad because [now] I can’t do the things I’ve dreamed of doing.”

The most upsetting aspect of the school closure for De Beer is missing out on the everyday interactions within the community.

“It’s not even the social distance and not being able to meet up. It’s the small conversations in the hallways that you don’t usually have. It’s the conversations in class. It’s Bottom O sitting down and just talking to everyone,” she said.

Cornelius also noted one aspect he misses most about going to school is the unity that Bottom O provides.

“Having a space like Bottom O allows you to get so much closer to your grade … I don’t only get to see my friends during the breaks between classes, but I see and hang out with kids in my whole entire grade,” he said. “It’s funny what you miss when you don’t have it.”

However, De Beer also noted a few aspects she enjoys about being on lockdown including having more time to herself.

“I taught myself the Ukulele,” she said. “I tried House Party, which is a lot of fun. I am actually coming into more contact with my friends from Brazil and Panama with the extra time.”

Likewise, Bajpai said staying at home has allowed her to spend more time with her family. She said she is often busy with academics during regular school and it is hard to “take a step back.”

“I was playing cards with my parents last night, and I don’t remember the last time I’ve done that,” she said.

An extended lockdown becomes more likely in the U.K. as death toll increases. Further senior traditions such as the tube photo, prom and graduation could also be cancelled.

However, De Beer said that she understands the severity of the pandemic and that the decision to cancel these events could be necessary.

“I do realize that we have to be conscious of what is going on around the world,” she said. “I can’t just think about us. There is everyone else in the world, and the issue keeps getting worse.”

Cornelius said he thinks despite the school making the right decision to close when it did.

“It would’ve been nice for us to have a day to be able to say goodbye to each other and talk about the next steps going forward, but sadly, we didn’t get to that,” he said

The prospect of missing out on the typical graduation ceremony at Westminster Hall is saddening for De Beer. She said many of her family members were planning to travel to London to celebrate her achievement.

“I have been thinking about this for the past week, and I would definitely be really upset because it’s something that I have been looking forward to my whole life. I don’t say this lightly; I truly mean it,” she said.

As Editor-in-Chief of the yearbook, Bajpai said that after learning about the school closure, she immediately had to plan for the events and materials they would be missing.

“My first reaction was to go to yearbook. The following week was our final deadline week,” she said. “We had to adapt and be very creative for a lot of our spreads.”

In terms of making up for the senior tube photo, Bajpai brainstormed multiple ideas and decided to use a photo of Grade 12 from spirit week. She then created a tube logo and photoshopped it in.

“I wanted to make the best of the situation. So, I improvised with what I had to work with.  The senior tube photo was definitely a let down for a lot of people, so we did our best to try and put in a nice photo of our grade,” she said.

Similarly thinking of improvisation, De Beer said one potential option for graduation discussed during a senior council meeting was through Zoom.

“[We] were thinking of doing small outbreaks in advisory or in friend groups first just to say a few words, and for everyone to get to [reflect on] senior year,” she said.“We would then all tune into a live stream where [Principal Devin Ganeshananthan] would give us a final speech and a final goodbye.”

However, De Beer would rather “postpone rather than cancel” or have a virtual graduation. One of the biggest reasons De Beer wants to postpone graduation is to say goodbye to her teachers one final time.

“That’s the hardest part of this all. Teachers who you don’t have classes with that you would normally just see on a daily basis. Now, there is no way of getting in contact with them if you don’t have a zoom meeting,” she said.

Cornelius said he thinks the best form of saying goodbye to teachers given the circumstances is by “pursuing the passion for learning [that] we all have.”

“The best goodbye we can have with our teachers is continuing to work and pursue our academics and love learning in college and now,” he said.

De Beer plans to remain in the U.K. until the lockdown ends in order to meet up with her friends one last time.

“I would wait it out in London until I could see everyone because I think it’s worth it,” she said. “Those are relationships that I don’t wanna give up on when I go to college.”

Bajpai is comforted by the fact that she will keep in touch with her friends after leaving ASL and knows she will see them again.

“Luckily, a lot of my friends and I are confident in our relationship that we are going to keep it up even once we are in college,” she said.

De Beer said she is determined to say a final goodbye to her friends in person.

“I would dress up in a hazmat suit, and I would go to their houses and give them a final hug,” she said. “I really would have to say a proper goodbye, not online.”

Cornelius said that despite the situation at hand, everyone should try to move forward with a positive, creative attitutide.

“Obviously this isn’t ideal and no one could have imagined this would be part of their senior year,” he said. “But, if we try to make the best of it, I think that will be the lasting mark we have as a class and not the pandemic.”