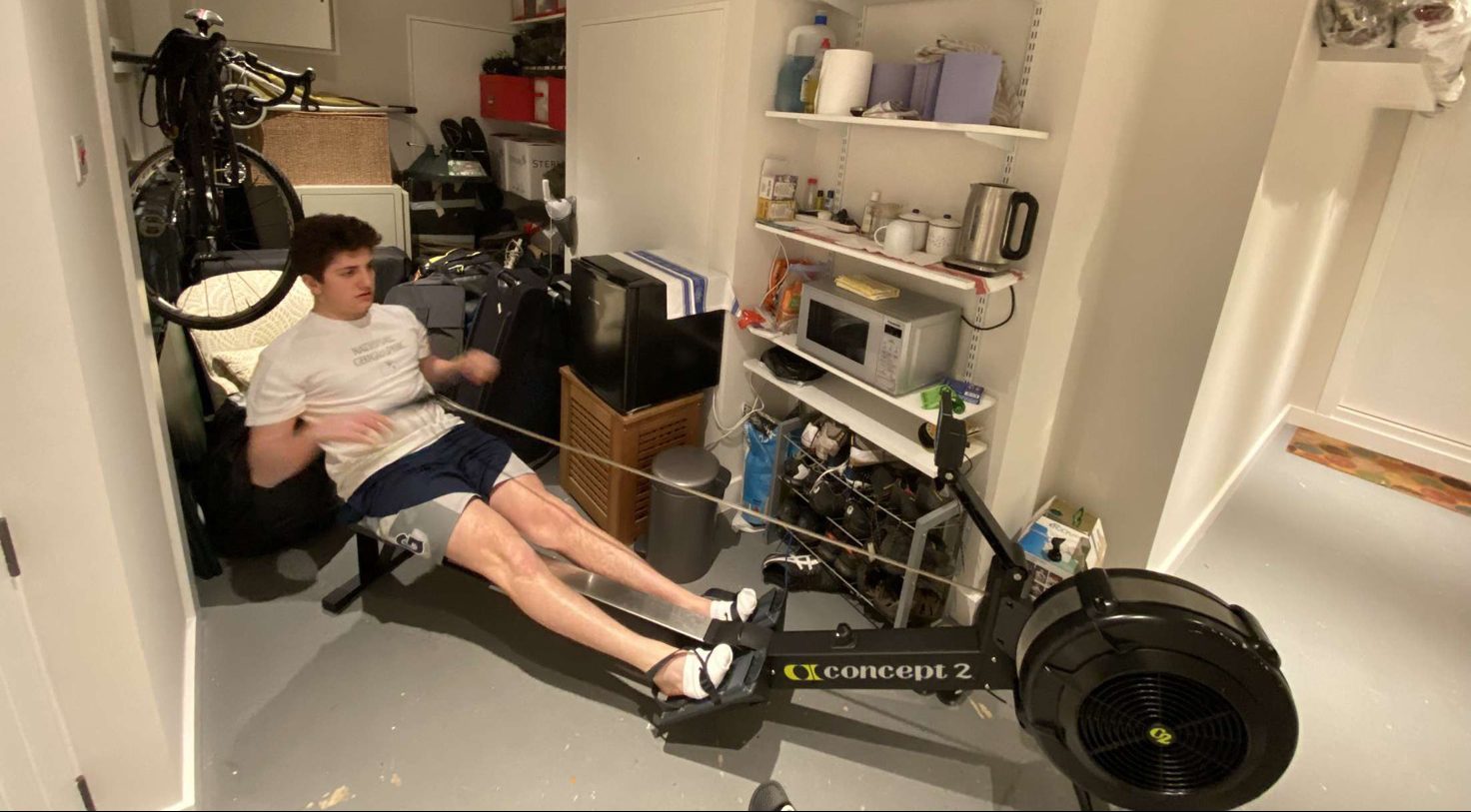 Performance crew team member Leyth Sousou (’22) trains on an erg at home. Crew had many races scheduled for the spring season, but they were canceled. Sousou has been able to train six times a week on the erg, but finds it hard be motivated to train without the other members of the team. (Photo by Farid Sousou)

Performance crew team member Leyth Sousou (’22) trains on an erg at home. Crew had many races scheduled for the spring season, but they were canceled. Sousou has been able to train six times a week on the erg, but finds it hard be motivated to train without the other members of the team.

Eight practices a week, 15 hours in the pool and three hours of general fitness.

Swimmer Lauren Brantley (’20) had been exercising at least that much every week since September.

However, on March 18, all of her practices got canceled due to the COVID-19 pandemic.

Brantley has been swimming competitively since she was 10 years old. She currently swims for and has never taken a break from the water for longer than four weeks. Now, Brantley said she won’t be able to swim until at least the end of May.

“Taking such a prolonged break is going to be awful for our fitness, our technique … everything,” she said.

Similarly, Jake Fellows (’21), who plays tennis for the varsity boys team, along with an outside of school team called Globe Tennis Club, has recently lost all of his ability to train.

“There’s nothing that’s available,” Fellows said. “My club where I normally play is shut down … I’ve asked a bunch of people around the city, like other players that I play with and my coaches, but they’re all saying the same thing  … everything’s locked.”

As a talented tennis player, Fellows is looking to try and play at a U.S. university, and this spring break, he planned to attend tournaments and visit some of the schools in which he was interested. But, all of his plans got canceled.

Like Brantley, Fellows is worried about taking so much time off his sport, as he is expecting to be unable to play for at least three weeks during the government-mandated lockdown period.

“It’s been a long time since I’ve taken three weeks off for tennis,” he said. “I’m definitely concerned about being rusty. I don’t know how I’m gonna feel holding a racket. It’s gonna be like … holding something I’ve never held before.”

However, Leyth Sousou (’22), a member of the performance crew team, said he actually might be in better shape now because of the lockdown. Sousou has an ergometer (an indoor rowing machine) at home and has used it to train during the time school has been out.

Although he’s been able to row at home, Sousou said he’s noticed himself less motivated because he can’t train with other members of the team.

“The team spirit of crew is really great,” he said. “When you’re not going on the water, crew isn’t that fun. So, without the team, it’s sort of hard to maintain the fun aspect of crew.”

It’s hard knowing that as every day passes, you get more and more out of shape.”

Brantley’s swim team tries to maintain spirit during these times by having Zoom calls at 5 p.m. every day, where they either do exercises like abdominal workouts and yoga, or team bonding activities like quiz nights.

Even though she has Zoom calls to supplement for pool time, Brantley said not swimming has affected her mood because she now does less physical exercise and has lost something so central to her life.

“If you ask my parents, I’ve been kind of a brat to live with because I mean, swimming was everything that I was really doing,” she said. “I would go to school, see my friends and swim. So, when you take all three of those away, it kind of left me with nothing to do.”

Brantley also said that losing her ability to practice has been hard for her mentally.

“It’s … hard knowing that as every day passes, you get more and more out of shape.” 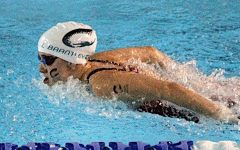 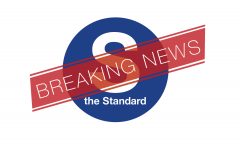 All ISSTs canceled due to Coronavirus concern

For Fellows, not being able to play tennis results in some of his time feeling empty.

“It’s boring,” Fellows said. “There’s like a whole chunk of the day where I’m just doing nothing. You can only play so many video games.”

Along with training, all of the competitions Brantley was preparing for were canceled. She was expecting to compete in Great Britain’s Olympic swimming trials in mid-April, but that event got canceled when the International Olympic Committee postponed the Olympics themselves. The Summer British Championships, scheduled to take place in July, were also canceled.

The cancelation of these events was particularly disappointing for Brantley because she said she swam in a meet on the weekend of March 14-15 and was feeling in the best shape of her life.

“I was really gearing up towards Olympic trials,” she said. “I swam really well … to be in such good form and then to basically be told that I can’t swim for months is rough.”

Similar to Brantley, Sousou is missing a lot of opportunities to work out and compete during this outbreak. Crew is a three-season sport, but Sousou said most of the races they prepare for take place in the spring. Most notably, the Henley Royal Regatta, which is held in July and hosts international competitors.