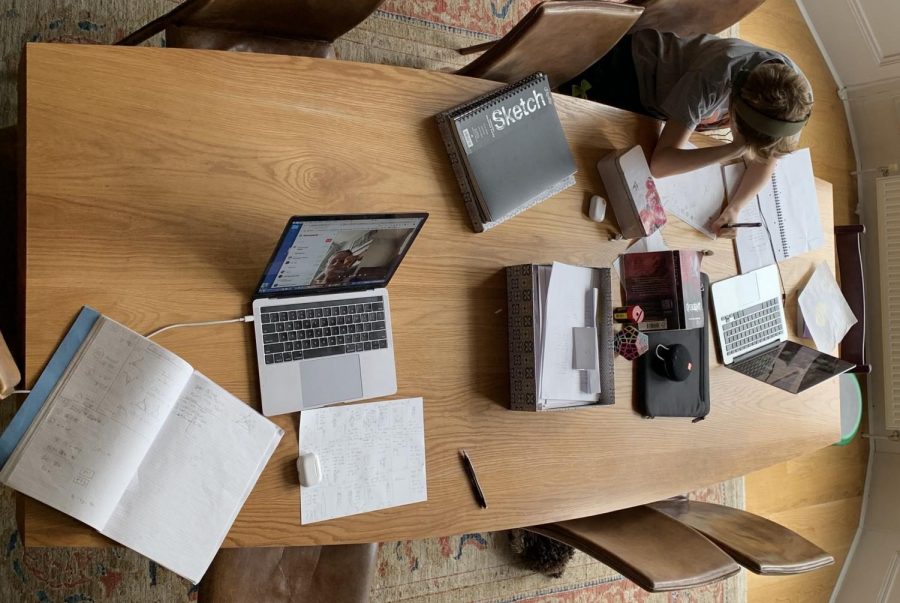 Students study in their at home workspaces during the lockdown. ASL practices asynchronous distance learning, where although the Zoom calls are during the block schedule, the students are mainly practicing independent learning. For some students, working for most of the day can feel draining.

Spending weeks on-end at home, without the ability to enjoy the typical leisure activities such as going to the movies, restaurants, amusement parks, malls or even your friends’ houses, is extremely uncommon in urban communities. However, on March 23, this became a reality for all U.K. citizens.

Prime Minister Boris Johnson released a stay-at-home order for all U.K. residents to combat the spread of COVID-19. Citizens should only leave their house for food and medicinal necessities, one form of exercise a day and travel to work that cannot be completed from home. Johnson’s order caused a wave of closures across the nation that range from schools to offices.

While such measures appear to be necessary in helping curb the virus’ rapid transmission, many feel that confining people to their places of residence can take a serious toll on their overall wellbeing and mental health.

Macey O’Malia (’21), who has been in self-isolation since school officially closed March 16, recalls being shocked by how fast her life routine changed.

While students like O’Malia are still adjusting to life in quarantine, some are already beginning to understand and experience the repercussions of social isolation on their wellbeing.

For instance, Ellie Mankarious (’21) said an adverse change in her life routine is participation in online school from her house, which she said can be psychologically overwhelming at times.

“I am sitting there [in my office] all day, and I am in my work environment all day, so it’s kind of like I am always working,” she said. “I don’t think it is actually very good psychologically for people to never have a distinct barrier between their two different worlds.”

Also, Mankarious said that being stuck at home can also sometimes be a bit claustrophobic and even can cause tensions within families who have to adjust to always being around one another.

Furthermore, several studies show that quarantine can have a direct impact on stress in an individual. According to the March 14 Lancet report about the psychological effects of quarantine, five analyzed studies show that hospital staff, who were possibly affected by SARS and had to self-isolate for a specific period, have shown symptoms of acute stress disorders. These symptoms include: “exhaustion,” “detachment from others,” “irritability,” “poor concentration and indecisiveness” and “reluctance to work or consideration of resignation.”

However, while all students are affected differently by the various adjustments to their life in quarantine, Apollina Barattieri di San Pietro (’23), who is currently self-isolating in the Dominican Republic, said that she believes her mental wellbeing to be most influenced by the lack of real-life social interactions with her friends.

“Being away from my friends is what has impacted me the most because that social interaction allows me to distract myself from negative thoughts,” she said. “Especially with the pandemic and everything going on around the world, there are a lot of reasons to stress and worry.”

Mankarious, similarly to Barattieri, said that while each person experiences stress differently, people will be most severely affected by the lack of real-life communication, not only with friends, but with teachers and classmates.

“In a way, I do feel cut off from the world, because it’s the small interactions with people that actually make up most of our lives, and that’s what we are missing out on,” she said.

According to The American Psychological Isolation, social distancing can lead to a multitude of health risks, which include disrupted sleep, poor cardiovascular health and impaired immunity. Additionally, it can impair executive function, which can often lead to lack of focus, difficulty with managing emotions, problems with paying attention and more.

Owen Steege (’22) said that even though he is attentive and productive when working from home, he understands why social distancing could make many students lose their motivation to focus.

“I do think for a lot of people, [working from home] can be a distraction, because they have a lot of things around them, for example, their phone, or if their computer’s open, they can go on a different tab, and open Youtube or whatever interests them,” he said.

Another common stress-contributing factor of quarantine is uncertainty. According to Verywell Mind, self-isolation can cause people to feel powerless and unable to have any control over the situation.

Nick Lockhart (’20), who is currently self-isolating in Maine, said that the uncertainty of when quarantine will end contributes to overall public stress.

“When people start hearing much longer sort of time frames proposed by different governments, I think it definitely contributes to stress and anxiety,” he said. “The media just perpetuates that this is all sort of going to be the end and that it’s going to be much longer than expected.”

Lockhart also said that as different news sources have varying claims on when quarantine will be over, the uncertainty can add to the already harmful mental effects of social isolation.

To keep human connection during isolation, Steege said that he stays in touch with his friends through social media, but said that Zoom is particularly helpful for staying connected.

“I’ve used Zoom a couple of times to talk with my friends, because that way, we can have multiple people in the calls. I also think even if you are just calling them to do work, it’s still nice to have that person there to talk to, so you are not by yourself,” he said.

Barattieri also said that she heavily relies on social media platforms such as Snapchat and Instagram to stay in touch with her friends, in addition to frequently using FaceTime.

Even though Barattieri said that being in online communication is nothing like face-to-face interactions, she said that it can be helpful for the time being.

“[Online communication] is a good substitute, but nothing is like seeing your friends in person,” she said. “When you are face-to-face with someone, the connection is so much stronger. Overseas or across the internet there’s a disconnect there that you wouldn’t have if you were seeing your friend in person.”

Furthermore, Lockhart said that besides staying in touch with your friends, it is helpful to go outside to breathe some fresh air.

Although O’Malia said isolation has been difficult, she understands that it is important that she follows Johnson’s stay-at-home order.

“Quarantine sucks for me personally, and I wish I didn’t have to do it, but it’s just so selfish of me to be angry about self-isolation,” she said.