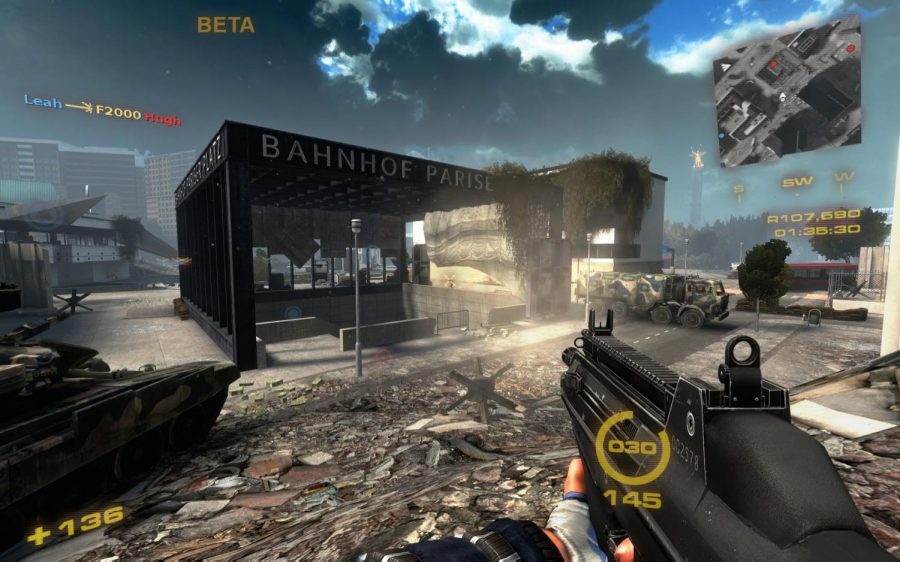 First person shooter games can often be attributed as the cause in gun violence in the U.S. However, there is distinct different to playing video games and shooting live ammunition, which is overlooked.

As the spew of gunfire rings in my ears, I clutch my mouse tightly. Although I shoot, although I kill, I am not committing a crime nor taking someone’s life. When I eliminate an enemy in a video game, there is no anger or frustration behind it.

As a gamer, I play many shooter games. The games include guns, weapons and of course, violence. But as soon as I see a policeman holding a gun, my muscles tense, my throat tightens, and I am immediately alarmed. I find that the scale of shooting someone in a video game is on a molecular level compared to shooting someone in real life. It is for this reason that I found it so surprising when the U.S. President Donald Trump blamed two mass shootings on video games I know and love.

On August 3rd, 2019, Trump stated that the glorification of violence in video games caused the El Paso and Dayton shootings. What the president claimed provided no reasonable solutions and completely disregarded the real problems of gun violence in America. He claimed it was the video games children play that are encouraging the horrible shootings taking place. Video games are not the source of the uprise in violence in the U.S..

The first factor we must consider is that video games do not cause people to be more violent. The human brain is much more elaborate than to be affected by such a simple activity.

A research study conducted by Psychologists Daniel J. Neller and John Matthew Fabian showed that someone’s personality and manner are only subject to change when a traumatic or life-changing experience occurs. A mere form of media such as video games would not affect how violent a person is, but rather their emotions and feelings during the time of play.

Another study conducted by Andrew K. Przybylski, a psychology professor at Oxford University, showed that violent video games have a minimal effect on a person’s personality – the correlation was rather between the frustration of a certain video game.

The study conducted had children between the ages of 4-17 play a wide variety of video games. They were later asked questions to determine their level of violence. More frustrating games yielded more “violent” teenagers in their tests, signifying that their violence routes from not the content of the said game, but rather the difficulty. Video games, although they may be frustrating, do not compare to the frustration of real-world problems children are facing. Neglect and bullying are two main ones that have been a recent topic in schools. Being chronically victimized at a young age has major effects in the future, with extreme cases leading to violence.

In fact, most school shooters have been found to be bullied in their schools. Instead of censoring video games that children enjoy, they should come up with proper solutions to combat bullying in schools and neglect at home. These are actions that, unlike video games, can lead to dramatic shifts in personality and violence.

The attackers of the El Paso and Dayton shootings had been thoroughly studied after the events in August. In further investigation, many correlations between the two became apparent.

Firstly, they were both reported to have been bullied in school. This emotional trauma plays an important role in shaping the ideals of a human, especially a child.

Moreover, both attackers had easy access to guns. This is a clear indication that the lax gun laws in America are an issue that must be considered.

Even though Crusius’s manifesto is specifically focused on white supremacist views on immigrants in America, Texas Lt. Gov. Dan Patrick still claims that “I see a video game industry that teaches young people to kill.”

While the violence in video games does not affect one’s personality, it is still important that video games don’t educate about weapons. Video game creators should remove names of weapons, usages, and how to utilize them from their games in order to not give knowledge about firearms to a younger audience. Many shooter games include specific names and usages of weapons, which might complement the widespread guns and the remiss gun laws, especially in America.

Although some video games may include violent aspects, it is still important we don’t look to them as the only influence that causes gun usage. Blaming them for the 417 mass shootings in America last year alone is simply not constructive. What Trump said provided no reasonable solutions and a complete disregard of the real problems in America.

Instead, the government should focus more on implementing more effective and reasonable solutions instead of using scapegoats in order to take attention away from the real problems that need to be considered. It is only when we are able to understand what is actually affecting our future generations that we can reduce violence in our communities.