The Standard • 4th May 2020 • https://standard.asl.org/15067/opinions/leaying-down-the-law-the-pandemic-must-not-be-politicised/

L(e)aying Down the Law: The pandemic must not be politicized 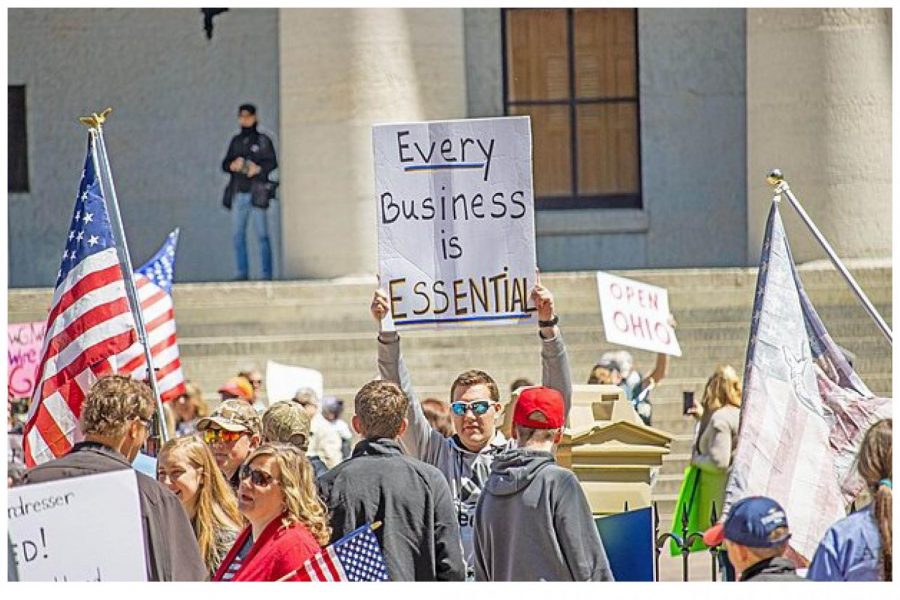 Deputy Editor-in-Chief: Print Lea George tackles the debate in the U.S. about whether rules set to control the Coronavirus violate citizens' constitutional rights.

Hi! So, it’s been around three weeks since my last column was posted. For those of you who haven’t read it, it was about Guantanamo Bay, and why its closure is imperative for the U.S. to remain constitutional. Speaking of the constitution, this post will be about rights, but in this case, about how certain “rights” can be taken for granted.

All of our lives have been shifted upside down in the last month and a half. Regardless of where we are in the world, our routines have been shaken with the introduction and spread of COVID-19. Whilst it is true that many of us are doing the best we can to adhere to our respective government regulations, there is a certain group that I would like to discuss that has managed to turn a matter of health into a political and legal debate.

The U.S. currently has the highest number of COVID-19 cases in the world. According to BBC.com, the number of COVID-19 cases in the U.S. has surged to over 1,180,000 with more than 63,000 fatalities at the time of writing. It is no question that this virus is continuing to plague the nation at a high degree. Whilst it is true that some states are beginning to alleviate certain social distancing measures, lockdown protests have begun to spring up across the country in states such as Texas, Ohio, Kentucky, and Michigan.

The protestors believe that the lockdown put in place violates their “constitutional rights” to work, saying that the situation has made many families struggle financially. Essentially, people are fed up with the strict restrictions that their states’ governors have implemented to protect the lives of Americans.

It is true that the coronavirus has caused a great deal of economic damage to not only Americans but the rest of the world. In fact, unemployment rates in America are the highest they have been since the Great Depression in 1929. Since last week, more than  30 million people have filed for unemployment. In the first economic quarter of the year, the U.S. GDP dipped nearly 5%.

Whilst it is important to recognize the economic hardships that have resulted from the outbreak of the coronavirus, it cannot be used as a legal or political justification for people to disobey the regulations put in place by the government. Whilst freedom of speech and protest is a right that all American citizens have, in times such as this, they must be limited, as they ultimately put people in danger. Protests and mass gatherings such as the anti-lockdown protests only increase the spread of the virus.

The protests are largely based around the idea that the lockdown violates an individual’s constitutional right to go to work and move freely. However, it is imperative to understand that in times like these, where a nation’s safety and security is put into question, certain “rights” and normalities must be placed aside. We must understand what the primary role of a government is: to protect its citizens.

In a global pandemic, and especially in a country that has the highest number of cases worldwide, extreme measures must be implemented and followed to ensure national safety. Such protests, although understandable to a certain extent, are nevertheless ignorant of the danger they pose by not adhering to government guidelines.

There are periods throughout American history in which certain “constitutional rights” have been duly suspended momentarily to ensure the safety of a nation. Just as Habeas Corpus was suspended during the Civil War by President Lincoln, or when the Patriot Act was adopted after 9/11 which momentarily suspended certain 4th amendment rights, certain rights must be suspended now.

Additionally, these protests have turned the issue of the coronavirus into a political one, rather than a health crisis. Now being mostly categorized as pro-Trump supporters as well as pro-gun activists, protestors mostly represent a far-right demographic, according to the BBC. However, the issue is not that the protestors are conservative but rather that they represent any political party at all. An international health crisis cannot become another part of an ongoing partisan issue in the U.S.

Such protests will only hinder the U.S.’s ability to fight the virus and lower its number of cases. The anti-lockdown protests are only another way for the Trump administration to gain public support for the upcoming election. During a time like this one, the right to protest, which is a constitutional right, should be used wisely, which it currently isn’t. These protests are not only protesting against a lock-down but are continuously endangering others and preventing the U.S from progressing in regards to the virus.

Perhaps, if protestors wish to continue to voice their concerns, which they are entirely in their right to do, they should move their platform to an online form of protests. The most concerning aspect of the anti-lockdown protests is that they continue to endanger the lives of individuals and further expose people to the virus. An online form of protest would protect free speech and prevent further contamination.

For once, politics must be placed aside and separated from the issue at hand. The COVID-19 pandemic should not become a political or legal debate, but rather a cohesive effort by all citizens of the U.S. to overcome it. Ultimately, everyone has been affected by the virus, regardless of their political standpoint or their preferred candidate for the upcoming presidential election. It is unwise to continue to approach the issue from a liberal or conservative standpoint.

Unlike what the protestors are arguing, the lockdown is not a measure to inhibit one’s freedom or to directly violate their constitutional rights. Rather, it is the only way that a nation’s health can be protected in the most effective way possible at the moment. This is about national security, not partisan politics or law.