Clubs, councils stay active in the midst of COVID-19 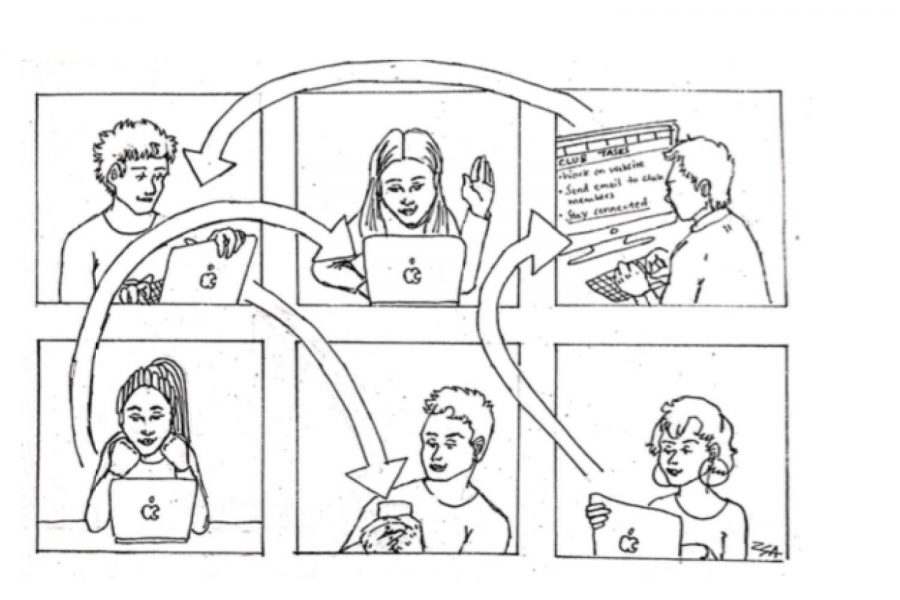 Though in the middle of a global pandemic, clubs and councils remain active, even from afar. Leaders of clubs and councils touch on what they are doing to with their organization to unify the school community. Graphic by Zainab Shafqat Adil

Both the school closure and the governmentally mandated lockdown has created difficulties for all aspects of school life, as everything must now take place virtually. However, despite the challenges, many clubs and councils in the High School are continuing to function via the internet.

One of the main ways in which student-led organisations have been able to cope with the lockdown is by coming together and working as a group.

President of the NHS Eddie Gualandri (’20) said that in order to successfully stay connected with the student body, clubs and councils must work together.

“We’re all in this together,” Gualandri said. “None of us wished for this. We’re all uniting, and every group is doing a fantastic job of uniting and coming together.”

For many clubs and councils, such as Student Council, the main goal is to maintain a connection between club members and the rest of the student body. President of StuCo Micaella Lavi (’21) said that what is most important to the council right now is that the High School remains a community and that morale is high. In order to do this, StuCo has regular meetings and makes sure council members reach out to their respective grades via email or social media.

“We’re now trying to find ways to expand our Instagram and our own platform so that we can reach out to students … we’re just finding different ways to uplift morale,” she said.

On April 7, StuCo posted a video on their Instagram announcing that they would be presenting a Love Island themed dating game. Since the announcement, the account has posted several audition videos of the contestants of the game. As of April 15 the audition video with the most views has a total of 624 views.

Lavi said that since the school is a community, it is important that students continue to remain connected with each other despite not being able to see one another in person.

“It’s important that that community stays in place and that we have some sort of bond that’s bringing us all together,” she said. “Especially because this is a time where we’re not really seeing our friends as much, and if we do it’s through a Zoom call, then it’s important to lift morale, and show that ASL is still a community.”

President of SJC Talia De Beer (’20) echoes Lavi, and said that similarly to StuCo, SJC hopes to boost morale and make sure that members of the community feel safe and are mentally healthy.

The NHS is also trying to help maintain a sense of connection and community amongst not only the students, but with members of the St. John’s Wood area who are not part of ASL.

Secretary of the NHS Piya Garg (’20) said that as a part of the organization’s plan to function during the lockdown, NHS members are planning to partake in community action by partnering with an organization called Neighborcare. This partnership allows students to sign up to be assigned an elderly person to whom they can connect with by calling them on the phone or buying groceries for them if they are unable to leave the house.

Garg said that the planned program is meant to help make students be “a friend and an ally to others in the community who might be more vulnerable, or who are more affected by the virus.”

Moreover, Lavi said that StuCo plans to continue to connect with students virtually as well.

“We’re just planning to be on social media and we’re thinking of … doing Zoom calls with random people,” she said. “We’re just finding ways to lift morale and bring the community together.”

Similarly to StuCo, Garg said that the NHS plans to possibly host virtual events via Zoom.

“We’ve also been trying to maybe think about hosting events and other virtual event type things where students can come,” she said. “The base of all of it is to boost morale, bring people together – really to just stand for the students.”

President of the National Art Honor Society, Ingie ElKhazindar (’21) said that the NAHS is trying its best to achieve its goal of promoting student artwork by finding digital tools to replace previous plans for the organization.

Similarly to other student organisations, the NAHS is using their social media, such as their Instagram, to connect with students.

“It’s really all about trying to take anything that we were gonna do at school, and making it virtual, so that students can still see student artwork in an easy way,” ElKhazindar said.

ElKhazindar noted the club’s Instagram as being extremely helpful, as it is a way for students to easily access student artwork which would have otherwise been displayed in school.

She said that for her, making sure that members of the NAHS continue to work on their respective projects and stay “on the same page” is extremely important, “even if [they] can’t meet in person.”

Despite only being able to communicate via the internet, ElKhazindar hopes that her club can continue to function as it had before by utilising the digital tools that are available to them.

“Doing everything from a distance can be difficult, and it’s a challenge, so we want to make sure that we can continue accomplishing our goals,” ElKhazindar said.