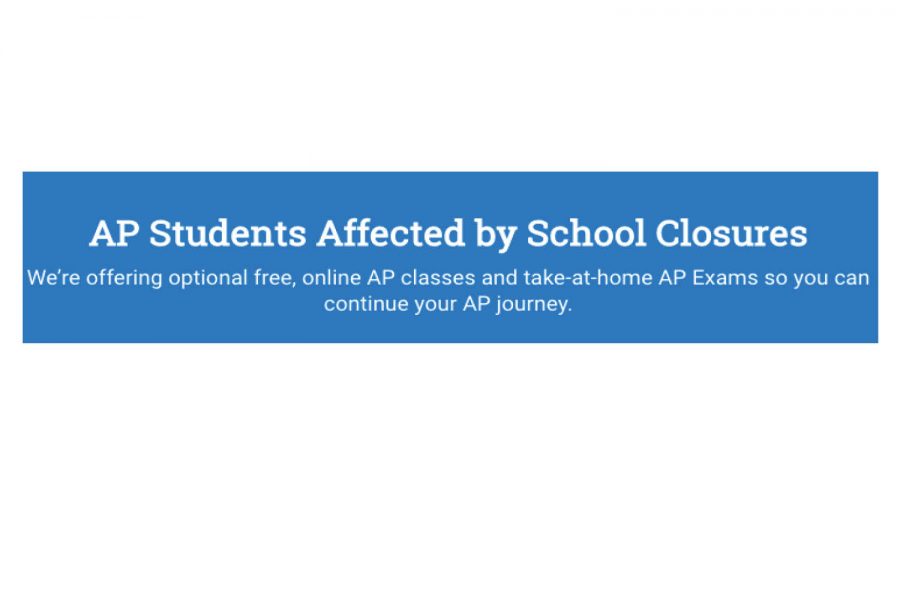 Just as learning must take place remotely, so must the AP exams. Both students and faculty reflect on the new formatting of the exams, and whether or not the change initiates a shift of pressure and mindset.

In response to the current COVID-19 pandemic, CollegeBoard has implemented various changes to the format of AP exams. The tests have transitioned away from the two to three hour exams previously taken in authorized testing centers, to 45 minute tests taken from home. They have also adjusted the structure of the 2020 AP exams to only cover 75% of each course material.

Such changes, however, have evoked mixed reactions among the student body. Alice Moyle (’20) said that such alterations to the upcoming AP exams were crucial.

“Shortening it [to] allow people to take it [from] home is necessary because you can’t go to a public place and take it with other people,” she said. “The way that they made it, not easier, but that they adapted it to what’s going on has been super helpful.

While Ambrose Vannier (’21) said that such changes were necessary, he also said that shortening the exams also means there is less opportunity to exhibit one’s true knowledge about the subject.

“There is really only one shot,” he said.

He also said that by having a shorter exam, it assesses fewer topics, lowering his chance to prove his overall knowledge on the subject.

Similarly, Taylor Lewis (’21) said that even though there are logistical reasons that necessitated the reduction of AP test time, the shortening of the exam may take away from the valuable AP testing experience.

“[Shortening the test] is just easier because the internet is not very reliable with having three hour tests online and everyone using the same platform,” she said. “There’s definitely a lot of logistical reasons for why it needed to be shortened, but also it takes away some of the value of the test itself.”

As the exams adhere to Eastern time, those not on the east coast of the U.S. are faced with the challenge of time-difference.

Director of College Counseling and Academic Advising Anne Richardson recognizes this challenge, and appreciates that “taking the exams in the early to late evening is problematic for some of our students … If you are a morning person, staying up until 9 p.m. is not ideal.”

However, she also said that students that remain in London under lockdown are more lucky than some in Asia, for example, as that is a more drastic time-difference.

Moyle echoes Richardson, as she said that students “don’t have it as bad as some kids do. Some kids have a crazy time difference and take it really early in the morning.”

To Vannier, the time difference has its benefits and drawbacks. However, he said that it is always better to take the test a bit later in the day.

“It’s better to take it later than at 8 a.m.,” he said. “It depends on the person, but there are benefits, like studying more, but also drawbacks, like being tired at the end of the day.”

The High School administration took further steps in easing the academic complications as a result of the pandemic.

Richardson said that this decision is a necessary step in reducing the current challenges in taking the AP exam in the aforementioned format.

“Logistically, [requiring students to take the exams] was possible,” she said. “But, in this particular moment in time, it would be really unfair to students who are in different places, mentally and physically.”

Richardson said that even though there are students who are determined to take the exam, it is equally essential to consider students whose circumstances do not allow them to do so. For instance, some are either “sick, dealing with sick family members, or dealing with other losses as a result of this lockdown.”

Lewis said that the High School administration handled the situation well; however, she also said that it can still be useful to take the test.

“I am going to take all of my [AP’s] because it’s only a 45 minute test and we have been studying these topics all year,” she said. “If someone else is in a different place mentally or dealing with this whole state of the world in a way that doesn’t allow them to focus as much on taking a test, then [from the school’s standpoint], that’s definitely the right decision [for them] to make.”

Moyle said that all the changes implemented by the CollegeBoard and the High School administration have shifted her mindset when approaching the exams.

“The pressure comes off a lot because, if things were normal, we would be meeting our teachers everyday and having review sessions,” she said. “[By] being at home, it is hard to manage your own time like that and to set times like that to study, especially as the motivation is so down.”

Lewis has also observed a shift in her motivation, yet, the change in her determination to succeed transitioned to classes she enjoys more.

“Because I am taking three of these courses, my motivation has definitely shifted towards classes that I am more passionate about or that I understand better,” she said.

Richardson said that, although the exams are optional, they should still serve as a source of motivation for students.

“Nobody really wants to take exams, but at the same time, it gives students something to work towards,” she said. “A reason to click on that Zoom link and go to class.”

Furthermore, Vannier said that while the CollegeBoard and the High School have had an understanding response to the pandemic, further complications persist, particularly in terms of the lack of a secure verification system in the online AP test format.

“Since many tests are weighted according to how people do, then I am sure that there are going to be people who are going to either cheat or have someone else take it for them,” he said. “It doesn’t seem that there is a proper verification system in place.”

However, Richardson said that only time will show whether the online testing experience was a valuable and convenient one, especially since many have not taken their exams yet.

“I’m really interested to see what AP students think about this online testing, more about the format, whether it’s easier or harder,” she said. “All of us in our office are wishing everyone taking AP exams the best of luck, and we will see how this will all work out.”