The Standard • 12th May 2020 • https://standard.asl.org/15123/news/academic-advising-and-college-counselling-office-is-rebranded/ 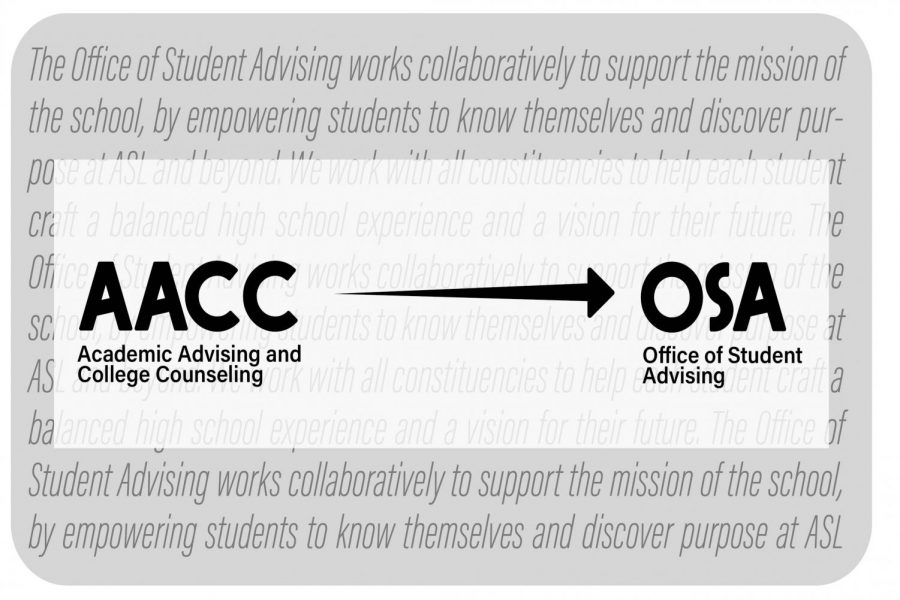 The Academic Advising and College Counseling office, home to food, puzzles, and other cherished amenities, has changed its name to the “Office of Student Advising.” The change represents adjustments to the office’s purpose and function. It was also made in order to fit in accordance with the overall ASL mission and this year’s theme of inclusivity. Luckily for students, it’s doubtful this name change will impact the amenities.

Director of the Office of Student Advising Anne Richardson said that the change was prompted by one main question: “Who are we and how do we serve?”

Since that consideration, the office began a year-long process to establish consensus on its new philosophy and name. The proposal was then taken to the High School administration and Head of School Robin Appleby.

The office has adopted a new philosophy, finalized May 7:

“The Office of Student Advising works collaboratively to support the mission of the school, by empowering students to know themselves and discover purpose at ASL and beyond. We work with all constituencies to help each student craft a balanced high school experience and a vision for their future.”

The change is also a representation of the growing focus on students’ wellbeing. Richardson said that she attributes a lot of the change that has taken place to Grade 11 Dean/Director of HS Advisory Program Jennifer Craig and the growth of the advisory program.

“Becoming the office of student advising really reflects how the deans and the … advisors really work on helping [to] support students,” Richardson said.

As a part of the change, college counselors will now be known as university advisors.

“We wanted to make sure that moving to the term university advising really reflected the fact that we don’t just focus on U.S. colleges,” Richardson said.

Richardson said that, were school in session on campus, this announcement would have made a “bigger splash.” Nonetheless, she said that several parents have informed her that they like the change, and that “it has gotten the attention that it deserves amidst all of the other things that [currently] demand attention.”