The Standard • 21st May 2020 • https://standard.asl.org/15344/opinions/human-rights-violations-ahmaud-arbery-murder-violates-article-3/ 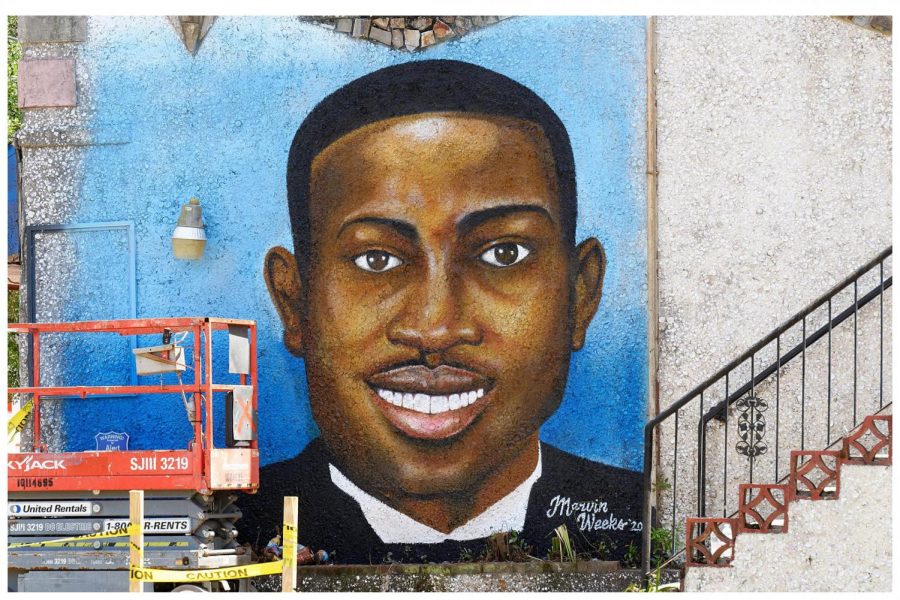 Arbery's murder is another of example of the racism that perverts the American justice system.

Hi readers! I hope you all are doing well in quarantine! In case you missed it, my last column was about India’s approach to COVID-19, which violates Article 5: Freedom from cruel treatment or punishment.

This week is Article 3: Everyone has the right to life, liberty and security of person.

This human right was violated in Brunswick, Georgia.

According to the New York Times, Ahmaud Arbery, a 25-year-old black man, was out on a run Feb. 23 in his predominantly white neighborhood, when he was lynched by a group of white men. The men claimed that they thought Arbery was robbing an unfinished house because he was seen looking into the house via surveillance cameras.

Gregory McMichael, 64, and his son Travis McMichael, 34, among others, chased Arbury for four minutes through the neighborhood by car, until they boxed him in and shot him once in the wrist and then twice fatally in the chest.

74 days after the killing, both McMichaels were finally arrested.

Not only is this a human rights violation as Arbery was murdered for absolutely no reason, but the legal process following his death was excruciatingly long and corrupt.

There were a total of four prosecutors that worked on this case.

Brunswick District Attorney Jackie L. Johnson – the first prosecutor – recused herself Feb. 27 because Gregory McMichael had been an investigator in her office until May 2019.

Then, in early April, George E. Barnhill – the second prosecutor – found no reason to arrest Arbery’s pursuers, claiming that “they had acted legally under Georgia’s citizen arrest and self-defense laws.” Barnhill then recused himself because his son had worked with Gregory McMichael in the Brunswick prosecutor’s office.

Finally, the third prosecutor, District Attorney Tom Durden of the Atlanta Judicial Circuit took the case April 13. For almost a month, little to no headway was made on Arbury’s case. Then, the video of the murder surfaced May 5, and everything changed in a matter of days.

That night, the Georgia Bureau of Investigation took over the case at Durden’s request. However, it was truly public pressure that changed the course of this case.

The video circulated all over social media platforms, with the help of human rights activist Shaun King, who has 1.9 million Instagram followers. Many celebrities posted the video on their stories, and their followers did too.

Finally, two days after the video was released and months after the murder, Gregory McMichael and Travis McMichael were arrested May 7.

May 8 would have been Arbury’s birthday, and to celebrate his life and speak out against his unjust death, hundreds of thousands of people went on a 2.26 – the date of Arbury’s death – mile run in a white shirt – the shirt Arbury was wearing when he was killed. #Irunwithmaud has around 200,000 posts on Instagram, as people showed solidarity with Arbery and his family.

In addition, Richard Demsick took his run a step further by posting a video on TikTok May 8 to prove that looking suspicious was not enough reason to kill Arbury, and that, instead, his murder was an act of blatant racism.

According to @nowthisisnews who posted the video on Instagram, Demsick, who is white, ran around his neighborhood shirtless carrying a TV. In the video, Demsick said, “surely someone is going to stop me now because, if not, what was the problem with Ahmaud?”

However, this case is far from over. Georgia Attorney General Chris Carr announced May 8 that he would be reviewing “all the relevant players in this case.” He then appointed the fourth prosecutor to this case, District Attorney in Cobb County Joyette M. Holmes, the first African American to hold the office in Cobb County.

After assuming the role, Holmes requested that Barnhill and Johnson be investigated for prosecutorial misconduct by the Georgia Bureau of Investigation.

In addition, King has been posting updates about the case, and the many complicated twists and turns that have slowly been revealed through tireless investigation.

For example, he posted a photo May 16 of a text from Officer Rash of the Glynn County Police Department to the owner of the unfinished house, telling him to call Gregory McMichael “when you get action on your camera,” instead of the police, allowing Gregory McMichael to take matters into his own hands as he saw fit.

Also, according to the New York Times, Officer Rash has a “record of past troubles, including claims of cover-ups and other misconduct.”

In the caption to that post, King said that the police department and prosecutors lied to Arbury’s family as they said that Arbury had robbed a home and was subsequently killed by the homeowner. King went on to explain that the police and prosecutors had to make up that lie as they had given “the McMichaels permission to be vigilantes and form the lynch mob that killed Ahmaud.”

King also posted a video May 16 of multiple white people going up to the unfinished house to look inside, none of whom prompted the homeowner to call Gregory McMichael.

In addition, King posted May 10 explaining that the Washington Post found out that the homeowner said, “I’ve never had a police report or anything stolen from my property, or any kind of robbery.”

These are just a few of the details that make this case corrupt. However, it is clear that this case is about more than a wrongful killing; it speaks volumes about race relations in the American criminal justice system.

Lee Meritt, a civil rights lawyer, took on Arbury’s family’s case. He gave a powerful speech May 19 explaining the horrible, yet painstakingly true, reasoning behind Arbury’s death, as well as the thousands of other innocent black people that have died for no other reason besides the color of their skin.

“The American culture … realized it was unpopular to kill people because they’re black, so instead they started calling them criminals,” he said. “Criminal is the new black, and if you can impute criminality on the mundane, like jogging down the street, then you can justify a murder.”

There are multiple necessary takeaways from Arbery’s case. First, if it wasn’t for the social media outcry, Arbery’s killers might not have been arrested yet. Social media has proved to be a powerful tool in projecting our voices surrounding a common cause, and is a catalyst for action.

Second, there are thousands of cases like Arbery’s that constantly get pushed under the rug that need our attention. Cases, where white people are the victims, are handled as a priority and justice is often served as soon as possible.

Third, conversations surrounding race and prejudice – especially when it comes to violence and the criminal justice system – can be uncomfortable and difficult, especially for those who are privileged due to their skin color. However, they are absolutely crucial to fighting the brutal systemic racism that plagues the world, and, therefore, we must keep engaging in them.