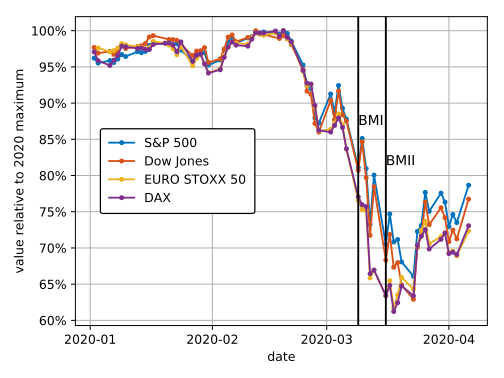 Companies and industries across the globe have been suffering as a result of COVID-19. Both students and teachers explain the toll the virus has taken on the economy.

The Coronavirus pandemic has delivered the fastest, deepest economic shock in history,” according to an article by the Guardian published Mar. 25.

This article also said that as a result of the spread of Coronavirus, all sectors of the economy and financial markets have been dramatically affected.

For Social Studies Teacher Travis Schill, the defining feature of the global economy is the “interconnectivity and high rate of transfer of people, ideas and things.”

Schill said the primary reason for why the Coronavirus is having such a vast effect on the global economy is because of how integrated and connected everything is today.

Similarly, Jeh Vandrevala (’21) said that this interconnectivity is reflected through global companies and business.

“[Companies] that are dependent on consumer spending and the ability to leave one’s house are all suffering greatly from the virus,” he said.

For example, Muri said that many retail stores such as Harvey Nichols and Harrods shut down.

Indeed, companies and industries worldwide have been suffering. According to Forbes, the stock market has faced a 28% decline from Feb. 11 to March 12. The stock market hit a “circuit breaker” March 12, which is when all trading stops and company officials are given 15 minutes to reassess their stocks.

However, an article by the Telegraph released March 14 said that some companies are benefiting from viruses, such as hand sanitiser brands and other health-related businesses.

Evidently, the stock market has reflected this as pharmaceutical shares have risen as a result of these companies thriving.

Additionally, Muri said that all companies producing “basic necessities are doing immensely well as people are constantly stocking up on these items.”

Yet, the Telegraph said that not only the pharmaceutical sector has seen an upturn. Numerous orders for luggage to be shipped from different parts of the world as a result of the travel bans have caused delivery companies to profit greatly from the pandemic.

Furthermore, Muri said that apps such as Netflix and Zoom are benefiting from the Coronavirus.

“Any online entertainment or communication apps are more likely to succeed under these situations,” Muri said.

Nonetheless, Schill said that in any economic situation, there are winners and losers.

“In this case, those that lose out outnumber those that benefit,” he said.

In addition, Vandrevala said the unproportional relationship between the two is reflected amidst the pandemic. Demand for certain goods has dramatically fallen, while others have seen sudden demand spikes. However, in both cases suppliers have failed to adjust.

“It is definitely harder for suppliers to produce as much output as they used to,” Vandrevala said.

Schill defines this to be “negative supply shock,” where there is a “decrease in the world’s ability to produce products, which could ultimately cause a recession.”

“It is an issue that plays on both sides of the production process: the supply and demand,” he said.

With about 4.5 billion people under lockdown orders, Vandrevala said “we don’t have as much money as goods being produced.”

Through the works of supply and demand, the shock the Coronavirus has brought could potentially cost the global economy up to $2.7 trillion.

Although political leaders and economists all around the world are struggling to come up with schemes to restart the economy, an article by the New York Times, published April 16, said that the effects of the Coronavirus are becoming more evident everyday as more workers become unemployed.

This number has been growing exponentially, rising to about 22 million in the U.S. in just four weeks. The Times said that this figure roughly represents the net number of jobs that were created during a nine-and-a-half year stretch, beginning at the end of the last recession in 2009  and ending with the pandemic’s arrival this year.

Many economists have compared the current state of the economy to that of the Great Depression. Though, while the stock markets might not have crashed to the same degree as during the early ’30s, unemployment rates may surpass those in that time period.

Vandrevala said this employment crisis is a “vicious cycle.”

“When you are unemployed, you are not receiving as much disposable income as you usually would, meaning that less businesses are being invested in, thus resulting in these companies unable to employ more people,” he said.

Schill, on the other hand, said the biggest financial impact the Coronavirus will have on individuals will depend upon the amount of income they receive.

“Just like in any situation, … people that are lucky and have a stable income and high savings rate, or are relatively far from retirement, will be less impacted by the virus or potentially benefit from it,” he said.

Schill said this is because they will be “investing money at a time period when all stock and equity prices are low; they will benefit and save more money.” Whereas people with “limited savings, lower incomes and less social support are the ones that will struggle the most during this time.”

Schill also said this would be worse for those nearing retirement, as their savings are reduced as the economy fails without time to recover. As a result, the places in the world with aging populations such as Europe or the U.S. would be hit harder.

Vandrevala said that what makes the Coronavirus stand out is the fact that there has never been a time in history where “so many countries are going through official lockdown and so much of the population has been ordered by the government to stay at home.”

Schill compared the Coronavirus to the 1970s oil crisis where members of the Organization of Arab Petroleum Exporting Companies claimed an oil embargo that caused immense amounts of gas shortages and a shock in the global economy.

However, he said the financial impacts go far beyond the stock market and personal retirement planning. Government budgets, struggling companies and individuals and companies with debt will all be pressured in this time.

To restimulate the economy, many governments have issued stimulus packages to large companies, small businesses and citizens who have been negatively impacted by the Coronavirus.

According to the New York Times, U.S. President Donald Trump signed a $2 trillion economic relief plan that will offer assistance to millions of American households that have been affected by the pandemic.

Other governments have done the same, such as a $213.6 billion stimulus package in Australia and a £3 billion a month plan in the U.K.

Since there isn’t a strong consensus on how long it will take the economy to recover from the Coronavirus as the world faces an unpredictable disease, individuals have their own predictions on what the future may look like.

In terms of long-term economic impacts, Muri said some industries will face more consequences than others, and will take more time to get back on track.

“Retail and the idea of going to a store to buy things will take longer to run normally than digital enterprises and delivery companies,” she said.

Similarly, Schill said that the Coronavirus will go a long way “towards normalizing digital work at home, and working from home might become a mainstream effort.”

Moreover, Schill said that the virus has exposed the need for economic reform globally.

“The Coronavirus has done a good job of showing where the weaknesses in the economic system lie in each part of the world,” he said. “Hopefully moving forward governments, companies and individuals will endeavor to be more prepared and face potentially even worse disease that may arise.”