Attitudes towards female athletes must change 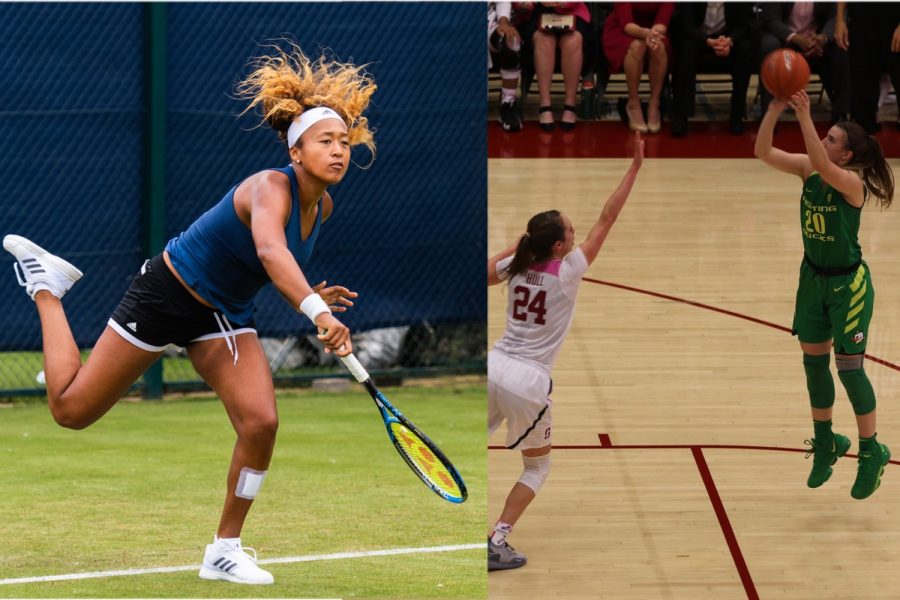 Photos used with permission from Peter Menzel and Michael Li/Flickr

Gender inequality in sports has been an issue for decades. Sports Editor: Jasmin Taylor highlights these inequities from a social media standpoint.

Gender inequality in sports is a topic that has been widely spoken about throughout the past decade. Everyone is aware that there is a pay gap between female and male athletes. For example, according to Forbes Magazine, during the 2019 WNBA and NBA season the top WNBA player earned $117,500 whereas the top NBA player raked in $37.4 million.

This pay gap is due to the fact that in team sports salaries are dictated by revenue, and women’s team sports do not generate the same amount of money as male team sports. This is due to a disparity between viewers, sponsorships, ticket sales and merchandise.

Why is there such a large discrepancy?

The attitudes towards women in sports, in the workplace, on the pitch and in front of TV screens needs to change drastically. Frankly put, in many sports, especially team sports, female athletes aren’t valued by fans of the sport as much as male athletes.

A common way for fans to stay updated on sports is through sports broadcasting and media outlets such as ESPN and FloTrack. Bleacher Report, one of these outlets, reposted a post from HighlightHER (a subsection of the sports media company House of Highlights dedicated to showcasing women in sports and culture) on their Instagram account May 14.

First of all, House of Highlights has 17.3 million followers, whereas HighlightHer only has 43.4k followers, which pales in comparison.

Follower count aside, after Bleacher Report reposted photos and videos of former University of Oregon women’s basketball player and current New York Liberty WNBA player Sabrina Ionescu playing and talking about her childhood experiences with basketball, specifically showing her and her brother beating men who assumed she didn’t know how to play, the comments flooded with hate.

As far as I could scroll, all the comments were attacking either Ionesca’s looks or athletic ability. Bleacher Report did not comment or address the hate she received in the comments.

Bleacher Report posts multiple times a day, featuring athletes from a variety of sports; however, after the Ionescu repost, the next post featuring a female athlete was posted May 26.

Bleacher Report posted a slideshow of tennis player Naomi Osaka headlined, “22-year-old Naomi Osaka is the highest-paid female athlete in history,” with the caption “She made 37.4M this year.”

Similarly to the post about Ionescu, the comment section was filled with negative comments towards both Osaka and fellow tennis player Serena Williams.

“Cordae ran up a bag,” one person wrote, referencing the fact that Osaka is dating rapper YBN Cordae, which received 3,166 likes and 27 comments.

“Serena Williams punchin the air right now,” wrote another, and “WNBA players punching the air right now” was a variation of this comment. “No one asked”, “What sports does he play?” and “Damn she rich af but never even heard of her,”  were also commented and liked by hundreds and in some cases thousands of users.

Again, Bleacher Report failed to comment on the verbal abuse occurring in their comments section.

If we were to compare this to a Bleacher Report Instagram post centred around male athletes – for example, their series of “Iconic shots. Iconic moments.” posted May 28 – it is clear there is inequality in the feedback male and female athletes receive on social media.

“That Tyree catch never gets old” commented a verified account, “The moment I saw Zidane I liked the post,” commented another. “The lebron and dwade one” commented a user alongside a fire emoji.

There were no comments comparing the male athletes to women as there are when women are compared to men, nor were there any about the athlete’s looks, their sporting capabilities or love lives.

Bleacher Report is the perfect place to analyze the differences in how sports fans treat male and female athletes. These comments are a reflection of how in the sports industry, men are prioritized over women.

If the media and fans were to treat male and female athletes the same by supporting them equally, watching both men’s and women’s games and buying their merchandise, then other inequalities such as the pay gap would decrease as an effect.

As social media and the internet grows and becomes more important every year that passes, it is important to use it as a tool to uplift others and promote positivity. Hiding behind a screen and spreading hate does no good to anybody.

Social media is powerful in the way it can connect people from all over the world, but at the same time, these connections are not always positive.

Although there isn’t as much human interaction when commenting on a post as there would be when speaking to someone in person, it is important to remember these comments are still directed at real people.

Osaka and Ionescu are women who should not have to endure hate online for no other reason than their gender, and nor should any other female athlete anymore.