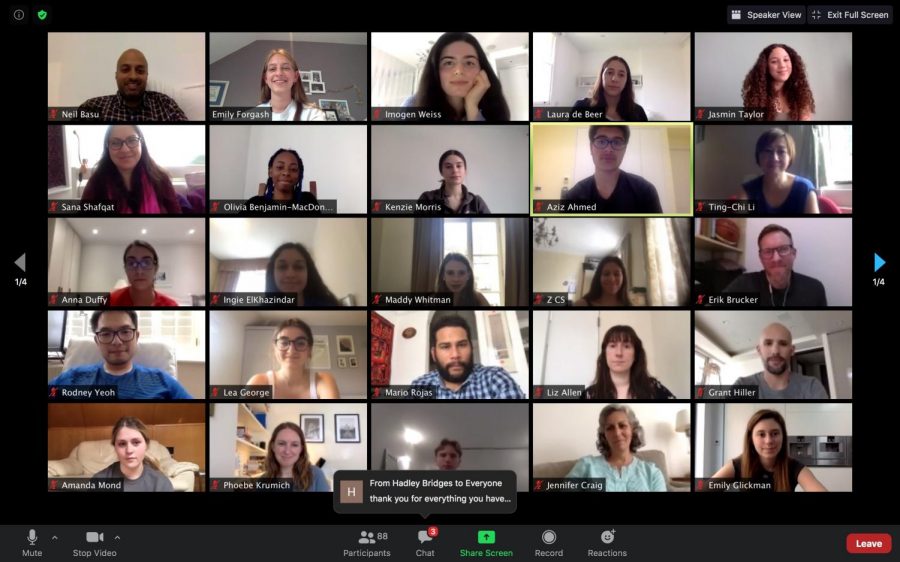 In response to the killing of George Floyd and the subsequent protests across the world, SJC hosted a discussion via Zoom June 2 to debrief and discuss. Both students and faculty members reflect on their takeaways from the discussion.

In response to the killing of George Floyd in Minneapolis May 25 and subsequent protests across the U.S. and the rest of the world, the Social Justice Council hosted a discussion via Zoom June 2.

This discussion aimed to bring the community together to discuss their thoughts about the events in a supportive and safe environment and, in turn, understand how to contribute to the black lives matter movement.

According to Co-President of SJC Olivia Benjamin-MacDonald (’21), the purpose of this event was to show the High School community that these issues must be acknowledged and discussed.

“As a council, we wanted to say something,” she said. “We can only do so much on social media … and we thought it would be appropriate to show everyone that this is something that needed to be spoken about.”

English Teacher Phoebe Krumich said that she commends the SJC, both students and faculty members, for their swift and necessary action in addressing this movement and the murder of George Floyd.

“I felt gratitude for the students who had organized it and for their leadership and urgency in this time,” she said.

Over 100 members of the High School participated in the discussion, which SJC member Alice Agostinelli (’20) said was surprising.

“It was really nice that we had such a big turnout between teachers and faculty members and students,” she said. “It was nice to see that many people were willing to be involved and a part of this essential … conversation.”

Similar to Agostinelli, Benjamin-MacDonald said that she appreciated the turnout.

“It’s really easy to get caught up in my head and think that no one else really cares,” she said. “But, just to see that everyone came to listen was a reminder that people do care.”

After a quick introduction, participants were assigned to breakout rooms. The breakout rooms consisted of one SJC member, helping to facilitate the discussion, and a small group of High School students and faculty.

For Tristan Weiss (’23), the breakout rooms were a way to gain insight into different opinions surrounding the injustices.

“We all got to voice our opinions, and those who didn’t want to voice [their opinion] got clear and detailed explanations of what people were saying,” he said.

Similarly, Krumich said that students who didn’t speak during the group discussions still benefited from the meeting.

“Even students who didn’t say anything were really there to hold space and learn from that exchange,” she said.

Weiss said that he also learned about the different ways people were being educated about the situation.

“Some of our members in our group said they ordered books and they were researching new things, so I thought that was pretty interesting,” he said.

Furthermore, Krumich said that she was most impressed by the tangible action students have been taking.

“One of the most impactful things to me was how the conversation kept returning to, ‘What can we do?’” she said. “The conversations that students were pressing for themselves to have in their own lives, all that action was a thrill to see.”

In addition, Agostinelli said her breakout room discussed a range of topics, one of them being the ASL curriculum and how it should be adjusted to make room for discussion about race.

“A teacher actually asked, ‘What would you like to see more of?’, and I thought that was very genuine and nice to see that our opinions as students were valued,” she said.

In addition, Krumich said that the discussion asserted the High School’s dedication to the new Diversity, Equity and Inclusion statement that was implemented in April.

“Seeing how many students participated in it as well as how many faculty members showed up to listen and support, I think that all – I hope – is a sign of our commitment to that new statement as a community,” she said.

Ultimately, Weiss said that the biggest takeaway from the discussion for him was that students can make a difference in a multitude of ways; however, taking action of some kind is crucial.

“Make sure that you can do something to help,” he said. “It doesn’t have to be something extreme like going to a protest or making your own page on Instagram, you can just educate people and voice your opinion.”