Graduation for class of 2020 takes place amid pandemic 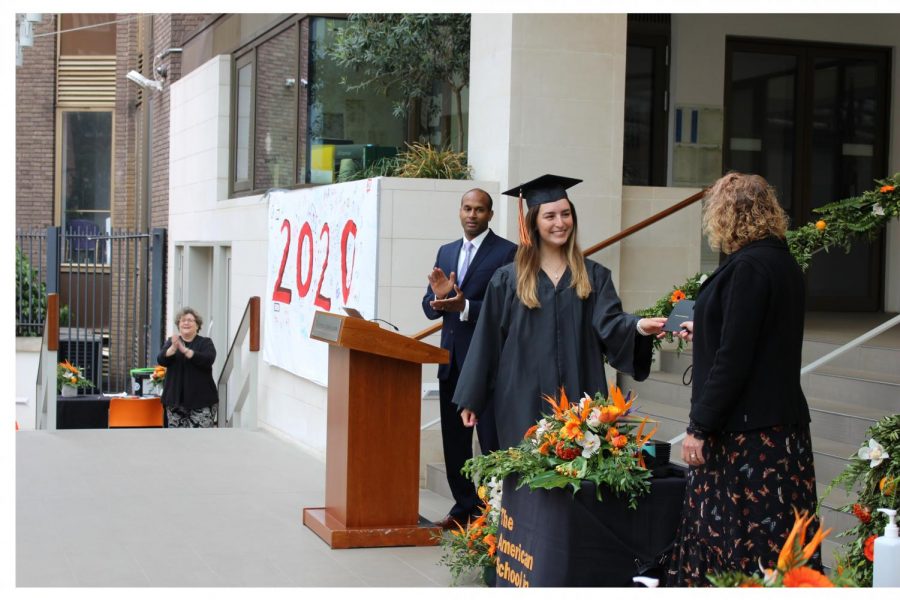 Sofia Van MIerlo ('20) accepts her diploma from Head of School Robin Appleby. Every Grade 12 student had an allotted 10 minutes to receive their diplomas on campus from Jun 3 to 5.

Since the school closed campus March 13, the administration and Senior Leadership Team had considered various options for the graduation of the class of 2020.

However, as distance learning endured, fewer options were left on the table, until the administration announced May 14 that the ceremony would go ahead virtually, and that seniors would receive their diploma individually at the Waverley Entrance, rather than receive them in Westminster Hall like in past years.

Graduates received diplomas at school June 3-5. Each senior was allotted 10 minutes, and timings were organized alphabetically.

While there were pros and cons to receiving diplomas at school, Gabriel Hajjar (’20) said that he enjoyed the “intimate” atmosphere.

“It was very personal,” he said. “Given the current circumstances, it was definitely the best approach they could’ve taken.”

Similarly, Jack Wilkin (’20) said that the diploma process at school made the graduation feel more special.

“I felt like it was a great, great job on the school for having every kid have their moment,” he said.

Likewise, Sofia Van Mierlo (’20) said that the school setting provided her with a place to thank teachers and administrators

However, while she said it was nice that her close family could sit up front and experience this milestone in her life more personally, it was unfortunate that her extended family could not.

The community was invited to a virtual commencement ceremony to be live-streamed June 6. Certain components were pre-recorded, such as the High School Choir’s performance of “The Road Home” by Stephen Paulus.

However, other aspects of the ceremony were shown live, such as the commencement address from Innovator-in-Residence Kwame Alexander.

In addition, Valedictorian Michaela Spurr (’20) said that recording her speech before the commencement ceremony alleviated some of the pressure.

Wilkin said that he appreciated the flow of the commencement ceremony in terms of the live and pre-recorded parts.

“Although some parts of it weren’t live action, I still think it flowed quite nicely,” he said. “They did a really nice job of stringing together the commencement.”

In addition, the Senior Council worked extensively to prepare for the virtual ceremony. This included producing multiple videos, one of which included graduates passing a fake diploma to each other by compiling multiple videos together. Another was the traditional throwing of the cap, a staple of any commencement ceremony.

Van Mierlo said that the videos required a lot of difficult coordination.

“We had to coordinate with each other to make sure it all aligned,” she said. “We were keeping in touch throughout the entire process.”

For Van Mierlo, watching the live-stream at home versus sitting in Westminster Hall did have its perks.

“It gave us the opportunity to really appreciate each other and to sit back and watch the entire grade as one in the comfort of our own home, and not have the stress of the actual graduation,” she said.

Similarly, Grace Gerwe (’20) said that, although she was sad that the class of 2020 couldn’t graduate in Westminster Hall, the virtual commencement removed some nerves.

“Westminster Hall, I mean, that’s unique,” she said. “It’s sad that we don’t get that, but it was nice because you didn’t really have to worry about if you were going to trip or not.”

Speaking on the ceremony’s program, Hajjar said that he appreciated the fact that the commencement addressed current events.

“They managed to not only incorporate things that happened within our grade, but also touched upon current issues such as, of course, George Floyd and the coronavirus,” he said.

However, Hajjar said that he didn’t want these topical issues to dominate his graduation experience.

“I don’t want to look back in retrospect into … my graduation where it’s just like, ‘Okay, yeah, we talked about coronavirus the entire time,’” he said.

This was an idea that Gerwe, the class of 2020’s Salutatorian, took into consideration while drafting her speech, which was pre-recorded for viewing during the ceremony.

“During the graduation, a bunch of speeches focused on [COVID-19] and on racism,” she said. “So I wanted to have a positive message.”

Ultimately, Hajjar said he is upset that the class of 2020 could not close out their high school years with one another.

“We couldn’t graduate together as a grade,” he said. “There wasn’t ever this actual physical form of closure with everyone.”