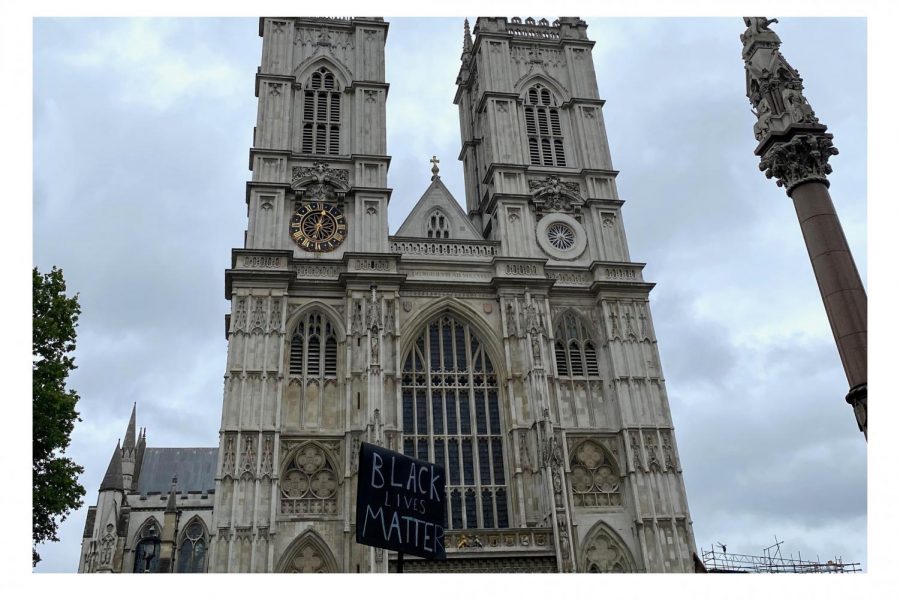 Both students and faculty reflect on the protests that have erupted worldwide following the death of George Floyd.

Protests have erupted worldwide following the death of George Floyd, a 46-year-old, who was a blue-collar worker, mentor at his church, and a contributor to the hip-hop scene in Houston, was suffocated to death by Minneapolis police officer Derek Chuavin and three others May 25.

Floyd’s death was, as Ruby Read (’23) said, the “breaking point,” and the latest in a line of thousands of African Americans murdered by law enforcement officers in the U.S.

Footage of officer Chauvin pressing his knee into Flodys’s neck has prompted outrage on social media. The footage showed Floyd lying on the ground, handcuffed as he groaned for help, with his last words being, “please, I can’t breathe.”

Eva Noel (’21) said that, when she first saw the video on social media, she wanted to cry.

“I was just utterly astonished with the treatment that he was given,” she said.

Noel said that the “police officer kneeling on his neck essentially seemed proud of what he was doing, and it’s so disappointing that people like this still exist and that they’re proud of what they are doing and don’t see the fault in it.”

Additionally, Caleb Henok (’23) said that Floyd was adhering to the orders and remained respectful towards the officers.

“I was so upset because he wasn’t doing anything wrong and they just arrested him based on suspicion,” he said. “He wasn’t making any problems, yet they still felt the need to kill him.”

Henok said that the possibility of something like Floyd’s murder occuring to him is worrisome.

“I keep on processing the situation, and the scariest thing to take in is the fact that, as a person of color, it could have been me,” he said.

According to the Telegraph, Chauvin was charged with second-degree murder May 29, and “the three other former officers who were involved in the killing are facing charges of aiding and abetting murder.”

Read said that she wonders if these charges would have been enforced if it wasn’t for the hundreds of thousands of people protesting for justice.

The protests began May 27 in Minneapolis, Minnesota and have since proliferated across all 50 states in the U.S. and 18 other countries.

Noel, who is originally from Minneapolis, was shocked to see the extent of the effects the protests had.

“It was surreal to see the place that I grew up burning in flames,” she said. “It is not something that is easy to wrap your head around.”

Looking back at the city she grew up in, she said that there is a distinct contrast between the type of people with whom she grew up with and the officers who are supposed to be protecting and representing her city.

“I remember growing up in an environment that was extremely diverse, and I’ve always been used to seeing a diverse amount of people in my neighborhood,” she said. “I wasn’t expecting this type of treatment to occur in Minneapolis.”

An article published by CNN June 8 said that the different forms of protests have been taking place across the world. Some protesters have stood in silence for almost nine minutes – the amount of time that Floyd struggled to breathe while the officers detained him.

“Taking part in the protests was so powerful, from every single angle you could see that there are people who are truly fighting for justice and for the black community,” she said.

As a mixed individual, Read said that her lighter complexion comes with a certain privilege that she should use to fight for and stand by the Black Lives Matter movement.

“I’m mixed, but I’ve grown up in white communities,” she said. “Although I don’t face the forefront of racism as often as black people do, I will use my privilege and fight for them.”

Henock said that the protests were necessary and brought more attention to the movement.

“It is good that people are coming together and spreading awareness for different causes so that people that are ignorant to this situation can learn what’s going on,” he said.

However, according to an article published by the BBC May 31, although most of the protests began peacefully and stayed peaceful, “in a large number of cases, demonstrators clashed with police, set police cars on fire, vandalised property or looted shops.”

Noel looks back at Minneapolis and doesn’t recognize the city that she once grew up in.

“It’s definitely sad to see a city that I once was so proud of to be [a part of] in just total craziness,” she said.

However, Noel said that, although some of the riots are scary, it has gotten to a point where fighting for change is necessary.

“With great change comes great sacrifice, and if people just remain silent, that means that they are agreeing with the racism,” she said.

Furthermore, Read said that people shouldn’t make statements about the rioting without fully understanding the anger behind it.

“The rioting is reasonable in the sense that there was a cause for it, a reasoning that could have been prevented for decades but hasn’t been,” she said.

However, Read said she doesn’t fully support the looting and the violence and destruction it has caused on many businesses.

“I don’t support the looting just because I know there are some black families who have business that have suffered from it, but then again there is a reason for it and this just shows that there’s always like two sides of the story,” she said.

Henock said that although the looting and rioting has negatively impacted communities, he said that it is essentially what brought the movement to the attention of the government.

“Nothing else has worked before,” he said. “The idea of just spreading awareness on social media is great but it has not brought change. These riots are forcing change from the government, and although it may not be the best answer, right now it seems to be the answer that’s the most effective.”

Noel said that, although we live thousands of miles away from where Floyd’s death took place, racism occurs worldwide and that there are various resources for individuals to get involved in the movement.

“I understand that it is hard to activate as we are so far away, but signing petitions, donating, texting phone numbers and calling can do so much more than people think,” she said.

Read said that, although social media support is beneficial in certain ways she said that it is slowly turning into a trend.

“Social media support is great, but there are always going to be people not taking it seriously and posting black squares which will not lead to change,” she said.

Henock agrees with Read and said he hopes that this will not just be a trend that will die out.

“We have the attention from governments all around the world, this needs to keep going as long as possible,” he said. “If it dies out, this just shows that it’s just a trend where people post to conform.”

Read said that change will only happen if justice is served in the law enforcement system.

“Police brutality plays an immense role in racism and a sense of humanity needs to be established, such as the ban of rubber bullets and other weapons that the police have used to abuse their power,” she said.

Similarly, looking forward, Noel said that the officers who murdered Floyd need to face the consequences that they deserve.

“The only way to bring peace back to Minneapolis is if the officer involved gets charged with first-degree murder, otherwise the city will lose trust with police and it will be a lot harder to feel safe in a neighborhood where police treat individuals in such a way and get away with it,” she said.

Finally, Read said that, as a school community, more people need to step up and speak out for what’s right.

“It is not good enough to be not a racist in a racist society,” she said. “You have to be anti-racist and be able to get out of your comfort zone and stand up for what’s right.”