Students return back to campus amidst COVID-19 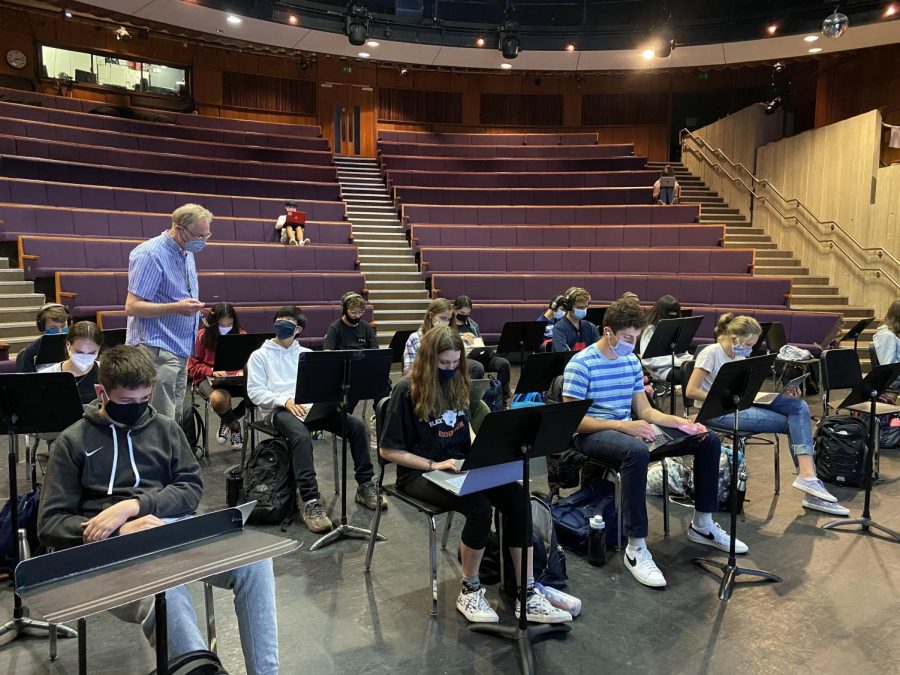 Due to not being able to play instruments, students in band class are learning to use technology to compose music, and at the same time, are following safety precautions such as wearing masks and socially distancing.

Students returned to campus Sept. 1 and 2 for the first day of the school year. Life inside the building was different than usual, as measures to prevent the spread of COVID-19 were implemented such as mandatory mask-wearing, social distancing, sanitizing surfaces with frequent contact and a one-way traffic system.

Director of Student Life James Perry said that a lot of work happened behind the scenes over summer to prepare for the arrival of students.

“You can plan all you want, but until you see it live, it’s hard to really know what’s going to work and what’s not going to work,” Perry said

Jay Heyman (’21) said that the work of the administration paid off to keep everyone safe, especially compared to other schools.

“It’s really good how we have this one way system,” he said. “If you look in the U.S., you have these pictures of corridors that have like 200 people in it and that’s a bit ridiculous. With everyone wearing masks and the one way system, it’s pretty good.”

Selma Hansen (’23) echoes Heyman, and said that the High School is doing the “best they can” to keep everyone safe.

“Everyone is doing their part to make sure they are washing their hands, sanitizing and keeping everything safe,” she said.

Similarly, from an administrative perspective, Perry said that the measures have been effective.

“Given the resources, I think we’ve come up with a system that helps mitigate the chances that someone would get [COVID-19] from someone else,” he said.

However, Heyman said these measures do present challenges.

“The masks are obviously difficult,” he said. “It’s difficult to hear the teachers sometimes, especially when they’re behind the plastic shields.”

Heyman said that the measures are not just uncomfortable, but they also hinder collaboration in the classroom.

“I want to see how other people tackle questions and see how they approach certain questions,” he said. “You feel less like you can go to your peers next to you for help.”

Similarly, Hansen said that collaboration in the classroom is not the same.

“There’s a lot less group work and partnerships,” she said. “For the people that learn that way it can be really difficult.”

Hansen also said that the social aspect of school is different.

“From a social standpoint, you are missing out on things like having lunch with your friends and talking to people in the hallway,” she said.

Though there are fewer ways to socialize, Heyman said that there are still more opportunities than distance learning provides.

“Everyone’s sick and tired of sitting at their computers on Zoom,” he said. “The social interaction is boosting everyone’s mood.”

Perry said that he worries students and faculty will find it difficult to adhere to these preventative protocols as the year progresses.

“I hope we don’t get fatigued, and as good as people have been these first couple of days, [I hope] that A, we are still here in October and November and B, that we are still following the rules,” he said.

According to Perry, the future of the measures is still largely unknown, but any changes made will take into account government guidelines and community feedback.

“We’re constantly going to make changes,” he said. “We’ll continue to listen to people and see what we can do.”