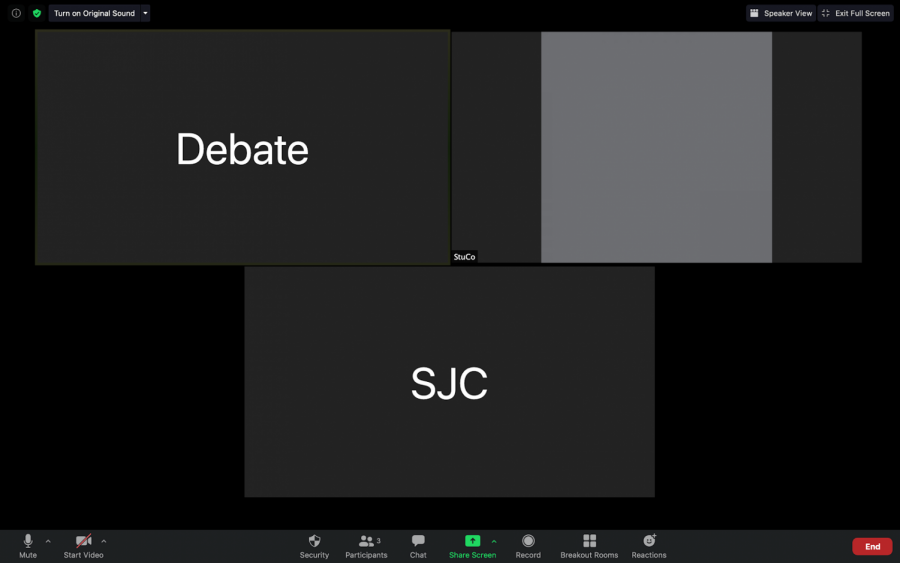 As school resumes, certain clubs are meeting on Zoom after school from 4:00 p.m. because of COVID-19 rules. Club leaders had to adapt to distance learning when the school transitioned to in-person learning in March.

As school resumes on campus, multiple High School clubs are planning for the semester ahead in regards to the rules and regulations put in place for COVID-19.

Since the student body experienced distance learning in the second semester of last year, certain clubs are taking advantage of the fact that students are currently in school.

Middle East club Co-President, Mona Marouf (’21) said that the club is a safe place where students can come learn and discuss current events occurring in the Middle East.

“What we strive to do is bring awareness to Middle Eastern issues as well as having discussions, so that students who aren’t Middle Eastern can learn about the culture,” she said.

Marouf said that before distance learning took place, the Middle East club would meet every month or so. However, once COVID-19 cases rose and we transitioned into DLP, the club didn’t end up meeting for the rest of the year.

Although the club didn’t get a chance to meet much last year, Marouf said that the club aims to organize more meetings this year to make up for the lost time.

“Especially since there is so much going on in the Middle East right now, I want to make sure that we meet as much as possible,” she said.

The current rule to prevent overcrowding after school and maintain social distancing is that students and staff must leave campus by 3:30 p.m.

Marouf said that Zoom might have an impact on the level of participation in discussions.

“We strive to discuss Middle Eastern current events, but we worry that when on Zoom, the discussion won’t be as interactive,” she said.

Additionally, Marouf said that since the club spends the majority of the semester planning for Middle East night, going online might slow down that process and the event itself might be canceled if the regulations are still in place by then.

In addition to the Middle East Club, the Student Council is also planning ahead for the semester and working on adapting to the hybrid system.

Student Council President  Micaella Lavi (’21) said that the role of the council is to “represent the student body, and letting them know that they can come talk to us about their scheduling or academic problems.”

Lavi said that prior to online learning, StuCo representatives met on a regular basis during the week.

“We used to meet every week and sometimes during lunch,” she said. “However, when distance learning took place, we could only do Zoom meetings.”

Lavi said that although the council tried to adapt to an online system, they couldn’t organize certain events that would have required being on campus.

“We weren’t able to accomplish all our goals when we went online, especially since we weren’t together,” she said.

In addition, Lavi said that, “there wasn’t the same amount of spirit that the student council usually projects,” she said.

In terms of planning for the semester ahead, Lavi said that she is looking forward to elections and meeting all the new representatives.

“I can’t wait to meet the new reps and see what they want to do both for the school and their grades,” she said.

Lavi said that StuCo is planning to work with other clubs through the president’s council to tackle pressing societal issues.

“The president’s council includes clubs like the National Honor Society, StuCo and the Social Justice Council,” she said. “This year, we decided that we wanted to primarily focus on Anti-racism as we think it creates a bridge between councils, faculty and administration, and we would like to ensure that students feel comfortable and represented in ASL.”

Lavi said that most StuCo meetings as a whole club will be on Zoom, but many, if possible, will take place during conference time.

“We will keep meeting online and on Zoom regularly, but we are going to encourage all the reps to meet with their deans during conference time and make use [of the] opportunities that we have been given,” Lavi said.

Although Lavi said that the current COVID-19 related restrictions might affect the pace at which the council moves, she does not think they will prevent the council from achieving their goals.

“The regulations put in place will undoubtedly slow us down on certain projects,” she said. “However, I don’t think we should look at it as a barrier but look at it as an opportunity to challenge ourselves.”

The Debate Team and the Investment club are two other examples of High School clubs that are planning for the semester ahead and adapting to the new rules put in place.

Jeh Vandrevala (’21) is one of the Co-Presidents of the Debate Team and leader of the Investment club.

As for Debate, Vandrevala said that the club is a place where students can practice their debating and arguing skills on current affairs and global issues.

Vandrevala said that before the implementation of the Distance Learning Plan, both debate and investment met once a week.

“When we could meet in person, in debate, we were obviously able to have tournaments with other schools,” he said. “For investment we had speakers come into school and talk to us about their experiences and advice with investment.”

Despite changes when the school transitioned to online, Vandrevala said both clubs were still able to run.

“When we transitioned to online, we continued doing debates on Zoom and we would just separate the teams into breakout rooms,” he said. “As for investment, we were still able to have many speakers present to us on Zoom.”

As for this semester, Vandrevala said that Debate plans to use a larger variety of platforms.

“For debate, we plan to use more apps in order to continue learning about debate skills and current events, and essentially making the most of the opportunities that come with the online world,” he said.

For the investment club, Vandrevala said that he hopes to still be able to bring in speakers that have experience in investment and finance.

“I am planning to contact many speakers for investment,” he said. “[Speakers] help students grasp a better understanding of the finance world if it comes from people who have real experience in that sector.”