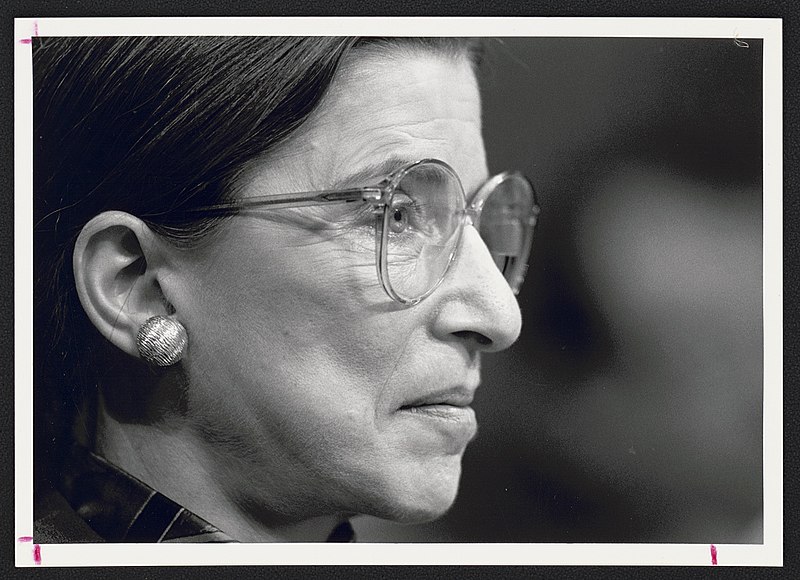 Though Ruth Bader Ginsburg passed away, she remains a symbol of the fight for justice and equality within the U.S.

Justice Ruth Bader Ginsburg had passed away. Devastated, I immediately clutched to my ‘Speak the Ruth’ pencil case that I have carried with me for the past two years, refusing to believe that she was gone.

My social media apps were flooding with tributes, photographs and quotes memorializing the inimitable and notorious RBG. As I devoured articles and heartfelt posts, I struggled to figure out how to pay my respects and how to honor her life, work and legacy.

Justice Ginsburg was a symbol of hope for me and countless others. She upheld and fought for the founding values of democracy in the U.S. throughout her career and inspired multiple generations of outspoken women.

I have long maintained that the only celebrity I would faint for if I saw in-person would be Ginsburg. She was an idol to many, not just because of her astounding accomplishments, but also because of her extraordinary grace and grit.

Ginsburg was born in Brooklyn, New York, to Nathan and Celia Bader, a Russian immigrant and first-generation Austrian-American who both belonged to the Jewish faith. Because neither of her parents had received higher education, she was raised to value education and revere opportunities to learn.

Throughout her life, she was known to incessantly question predetermined notions. This habit followed her to Cornell University, her alma mater, where she performed better than every other female student in her graduating class and where she met her future husband, Marty Ginsburg.

In 1956, Ginsburg enrolled at Harvard Law School where she was one of only nine women in her class of over 500 students. When her husband – who was also attending Harvard Law School – was diagnosed with testicular cancer, she cared for him in his illness while raising their 3-year-old daughter, attending her law school classes, attending her husband’s classes and writing all of his papers while he dictated them to her from his sickbed.

In her characteristically humble manner, she commented on this period of her life by saying: “I grew confident in my ability to juggle that semester.”

After two years at Harvard Law School, Ginsburg and her husband moved to New York and she transferred to Columbia Law School.

Despite her impressive academic qualifications, Ginsburg struggled to find employment after graduating in 1959 due to gender-based discrimination in the field of law.

Eventually, she was hired by Rutgers Law School. While teaching there, she began to take on cases that challenged gender inequality in U.S. law, including six Supreme Court cases, five of which she won.

She sparked a revolution through gender equality laws by first representing Charles Moritz, who was not given the tax deduction that was customary for caretakers because he was an unmarried male. She also helped establish the legal grounding that gives widowed men social security benefits.

In addition, she helped create the legislation that allows women to legally sign a mortgage agreement, get a loan or open a bank account without the permission of a male co-signer. She also worked so that women can continue their employment while being pregnant or if they have children, and have an equal pension to their male colleagues. In 1993, under President Bill Clinton, Ginsburg was appointed to the Supreme Court.

Ginsburg dedicated her life to the pursuit of equality through the law. She fought not just for the equal legal rights of women, but for the rights of people of color, men, disabled persons, low-income workers, immigrants and the LGBTQ+ community.

Examples include: in 1999 in Olmstead v. L.C., she wrote to promote the legal recognition of mentally disabled people; in 2015 in Obergefell v. Hodges, she argued to legalize same-sex marriage; in 2007 she dissented from the decision in Ledbetter v. Goodyear Tire & Rubber Co., which imposed conditions that made it more challenging for workers to sue their employers.

She also wrote the majority opinion in the United States v. Virginia case in 1996, which ruled in favor of the equal treatment of women by the Virginia Military Institute.

Over the past 20 years, Ginsburg has defeated cancer repeatedly. She was first diagnosed with colon cancer in 1999, then with pancreatic cancer in 2009 and has continually undergone surgery to remove malignant tumors from her body; it seemed as if cancer could not defeat this tiny woman. This was, of course, until last Friday Sept. 18 when she passed from complications due to metastatic pancreatic cancer.

Ginsberg was not just a ‘liberal icon’. She was a leading voice in furthering social justice issues in the U.S. and set an example for us all in her ability to maintain open communication with those of contrasting political views.

In an interview with Irin Carmen and Shana Knizhnik, authors of the biography “Notorious RBG,” Ginsburg said she wished to be remembered as “someone who used whatever talent she had to do her work to the very best of her ability. And to help repair tears in her society, to make things a little better through the use of whatever ability she has. To do something, as my colleague David Souter would say, outside myself.’’

In moments where cultural giants pass on, there is a shock wave of disbelief that grips us all. We realize that in the back of our minds, there was a part of us that believed they could not die.

Alongside the trail she blazed for the people of the U.S. lies a legacy of grace, grit, selflessness, humility and the immortal aspiration for an equal and just U.S.

Thank you, Justice Ginsburg, and may you rest in peace.