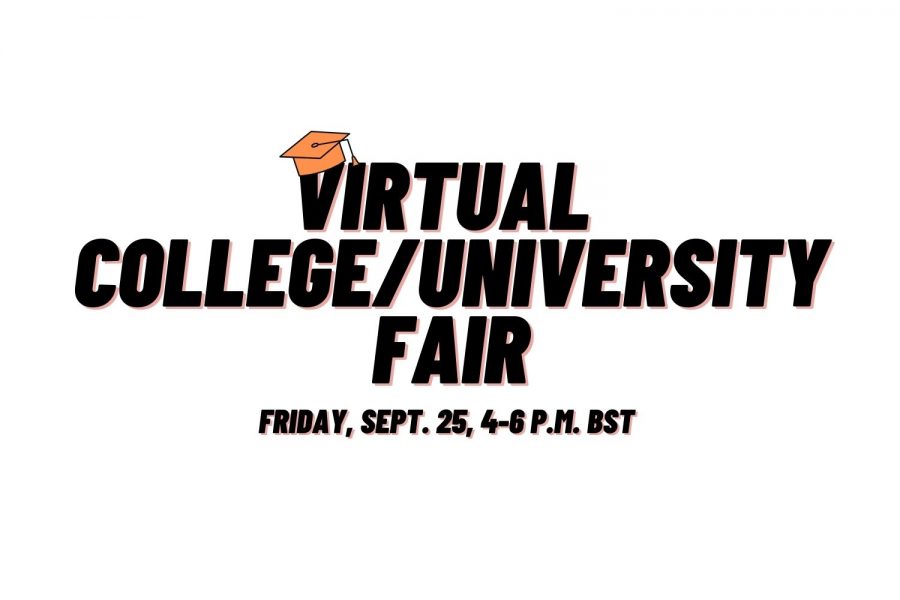 ASL hosted a virtual College/University Fair Sept. 25 from 4 to 6 p.m. The fair allowed Grade 11 and 12 students to meet with representatives from over 85 different global institutions via Zoom calls.

Traditionally, the college fair is held at ASL in the Farmer Gym, where representatives from each institution set up a physical stand that students can approach. However, due to COVID-19, the fair was held virtually.

University Advisor Nicole Thompson said that the main purpose of the fair is to familiarize students and universities with one another.

“The [purpose of the] fair is really just to introduce our community to a number of colleges and universities and give students a chance to see what’s out there, and also to introduce the universities to ASL students,” she said.

Furthermore, Thompson said she acknowledges there are differences between an in-person college fair and the virtual fair.

“It’s hard …  in a live college fair for students to approach a table and ask a question to a university rep,” she said. “I don’t know if the virtual context made it easier or harder.”

Additionally, Elena Stathopoulos (’21) who attended both the in-person college fair last year and the virtual one this year said that, although both fairs were beneficial, she preferred the in-person fair.

“In person, it was a little more beneficial because I was always one-on-one with the admissions counselor from the other school, and in the schools that I virtually visited there were multiple people in each Zoom room,” she said.

In contrast, Guillermo Basterra (’22), who attended in-person college fairs at his old school, said that there wasn’t a huge difference between in-person and virtual.

“The real value from the fairs is just talking to these people who are from the college that are experts, and you still keep that aspect online so I thought it worked really well,” he said.

Furthermore, Thompson said that she hopes the college fair allows students to start exploring and thinking about what they want in higher education.

“Speaking out loud and having an exchange with someone else about [universities] can actually start turning wheels,” she said. “I hope that that is part of students’ self-discovery on this college journey.”

Moreover, Basterra said that this fair helped him understand what his different options are and what opportunities he could further explore.

“This fair was a starting point for me because at this point I have not done enough research,” he said. “I was able to talk to some colleges that had programs that I was interested in which was helpful because it gave me points of where to start from, and it also gave me an idea of what type of college I want to attend.”

Stathopoulos said that regardless of being online, the college fair was still extremely helpful.

“I think the event was really beneficial, especially for seniors, because a lot of the questions I asked I really needed to know the answers to,”  she said. “For example, there was stuff that could either help me with my supplementary questions that I am writing for my college applications or even something as simple as how the school changed this year due to COVID,”

“Last year was more exploratory and about testing it out and seeing what I was interested in,” she said. “This year, I knew kind of where my head was at, and it was more about clarifying and specific in-depth information about the schools.”