Prohibition of singing clashes with government guidelines, per scientific studies 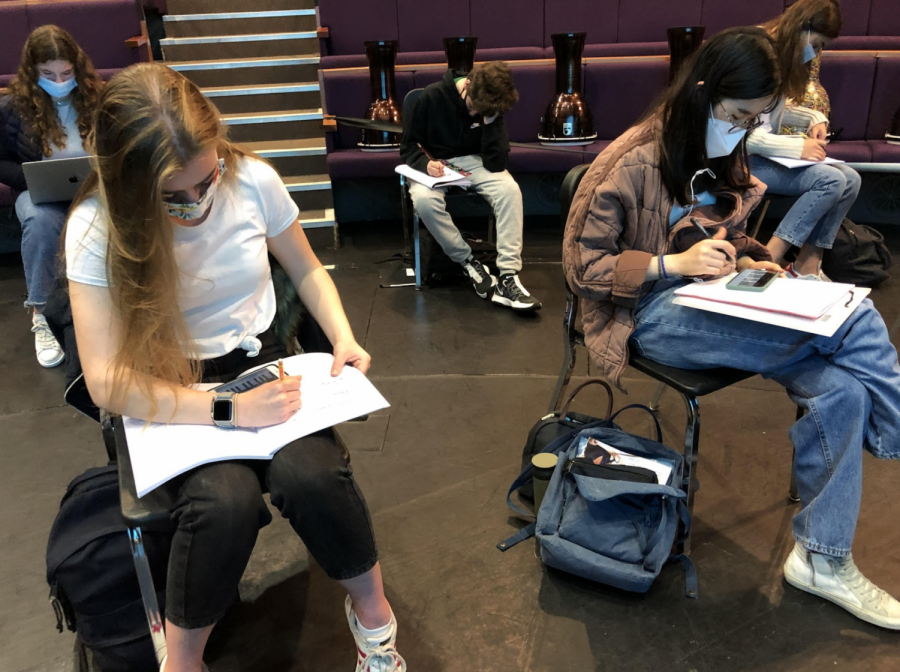 Brooke Beesley (’22) and Amber Auh (’21) compose a melody in Choir class. Until further notice, students are prohibited from singing despite U.K. government guidelines allowing them to do so.

I walked into the School Center on the first day of school smiling beneath my mask in anticipation of singing for the first time with the High School choir. I knew that choir wouldn’t be the same; the music department had split us into three different groups in three separate spaces. Nevertheless, I didn’t expect that the only music I would be making was a hum.

The school determined that, due to COVID-19, it was unsafe for students to sing. Instead, for an indefinite period of time, the choir will be exploring our own identities, conducting and learning music theory.

These replacements are the result of a rule made by the administration that students cannot sing. This clashes with U.K. government guidelines, stating that all students should have access to a quality arts education and can receive this education with additional precautions. These guidelines state that although there may be additional risks, the current research allows for students to sing. Schools must also consider preventative safety measures, which the music department has done by splitting the choir of 64 students into three groups of about 22.

An additional mitigation is that the room in which students sing must allow for natural airflow. This is due to the research that open airflow radically reduces risk, as it prevents aerosol clouds of droplets from forming.

Even though the School Center, Arts Building Gallery and MPR2 where students are currently rehearsing allow for students to stand at least two meters apart, it cannot be confirmed that the airflow in these spaces follows U.K. guidelines for singing according to Director of Operations Jim Heyndrickx.

But, outdoor accommodations can be made that also allow for students to social distance. Rehearsal spaces with natural airflow could include the playground, outdoor learning spaces and Coreen Hester Courtyard.

But, the evidence from this study only applies when performers sing at the same noise levels as speaking levels. Yet, it is possible for choristers to sing quietly; in fact, one of the main components of music are the dynamics, and these dynamics give conductors the freedom to play with volume. Although it is most common for a choir to project their voices, choristers can compromise by singing softly.

Ultimately, students need to be able to sing; one of the greatest aspects of choir is the unmatchable exhilaration of singing with other people. And it’s not just a feeling, there’s science to prove it. According to Discover Health, singing releases endorphins, which is the hormone that makes us happy.

We all trigger this chemical in different ways. For some people, it’s when Schoology finally presents them with an A+. For others, it’s making the final shot and winning the game for their team. For me, music is my source of happiness; it’s a form of expression where I can connect with people in a socially distanced world.