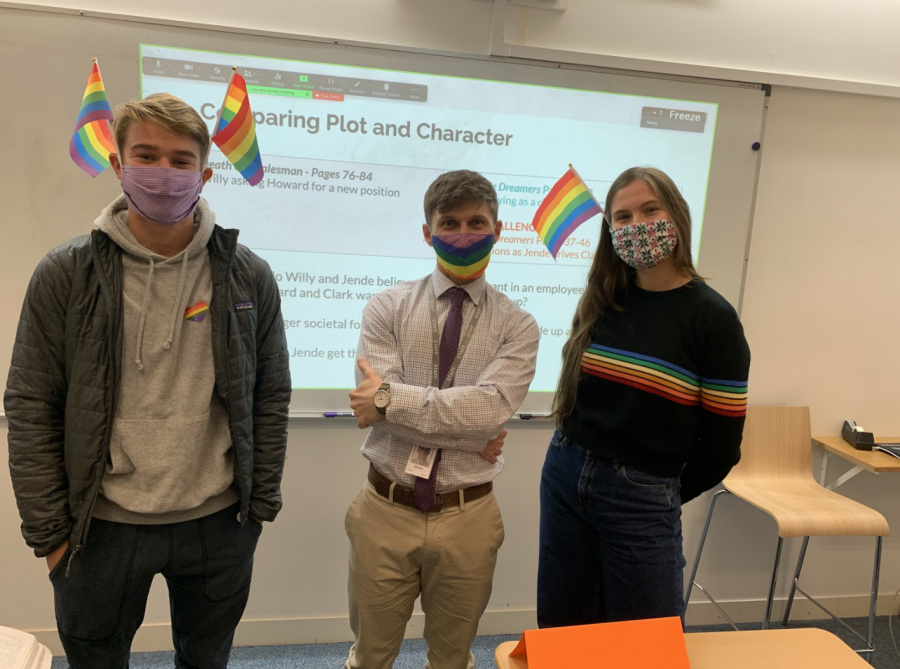 Editor’s note: Article has been updated from original version.

Many students and faculty members wore rainbow colors to school Oct. 26 to show support for the LGBTQIA+ community. The silent protest was in response to an unknown group of Middle School students hanging a Trump-Pence campaign flag on a play structure on Waverley Park Oct. 19.

The flag was quickly taken down, but the incident sparked debate among the student body about both discrimination against the LGBTQIA+ community as well as the free expression of students on campus.

President of the Gender-Sexuality Alliance at ASL Max Olsher (’21) said that regardless of the intention, hanging up a Trump-Pence flag makes disenfranchised minorities in the community feel uncomfortable.

Olsher urged the student body via email to stand up to discrimination by wearing rainbow to school Oct. 26 for LGBTQIA+ History Month and to reiterate that all people are welcome at ASL.

“If someone thinks it’s a joke to put a banner up that makes people, especially minorities, feel unwelcome at school, it’s not a very funny joke and it still has the same types of effect on people,” he said.

Furthermore, Olsher said that President Donald Trump has not stood up for minorities, especially the LGBTQIA+ community.

“It’s pretty much impossible to deny that even if [Trump] himself personally believes in true equality for everyone, the way that he’s used his power and his platform has not advocated for that,” he said.

“I think a lot of what Donald Trump has said and done has hurt a lot of people and therefore it’s really hard for politics to not get personal, especially these days,” he said.

However, Connor Eaton (’21) said that he sees an alternate perspective. He said the community should allow freedom of expression and shouldn’t meddle with political beliefs.

“There should be some underlying duty to try and uphold American doctrine and American sort of legal precedence, in the sense that we should be encouraging expression of all varieties,” he said.

While the campaign flag, a political statement, was the instigator of Monday’s protest, Olsher said that the action itself is about unity and support, not politics.

“We’re not supporting a particular ideology or arguing against it by coming into school wearing rainbows,” he said. “It’s about human connection, and about advocating for others who are disenfranchised for reasons they cannot control. And so when people tell me that school should not be political, I think, ‘I’m not the one who brought a Trump flag to school.’”

“I love it and I’d like to see more of it,” he said. “I really hope that this is the start, not just a one-off but the start of an awakening and, I am feeling really optimistic and hopeful.”

Eaton said that while he appreciates the sentiment behind the protest, wearing rainbow to school isn’t the most effective form of expression, and seems superficial.

“It’s somewhat ironic considering the debates on the left about performative allyship,” he said.

Furthermore, Perry said that it is quite difficult to separate politics from school because much of politics plays into social justice and wellbeing.

“Everything is political and everything’s personal, everybody’s emotions are heightened right now,” he said. “As much as I want change in terms of who occupies the White House, as a school we have got to remain unbiased but at the same time stand up for our core values.”