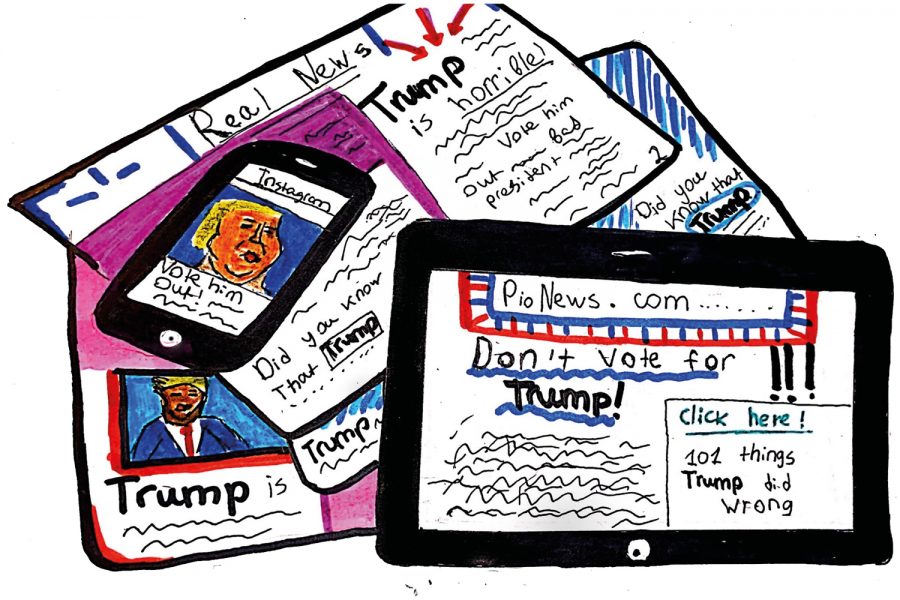 Nothing marks the upcoming presidential election like the sudden resurgence of collective political enthusiasm, which is unfortunately absent the vast majority of time. Since September, my social media has been swamped with posts regarding the 2020 presidential election.

The vigor with which people are questioning the current leadership and attempting to bring about change gives me deja-vu of the media’s response to the presidential election four years ago.

However, there is also an undeniable discrepancy between the two elections.

Though I was significantly younger and less politically aware in 2016, I still vividly remember encountering numerous posts about both President Donald Trump’s and  Democratic nominee Hillary Clinton’s presidential agendas. During heated political debates, whether online or in person, individuals were able to point to specific policies of each candidate as evidence to argue either for or against them.

Today, however, there is a sizable gap in our knowledge of the candidates, which stems from their unequal coverage online. Over the course of two months, I have possibly read about all of Trump’s flaws and harmful policies. However, I can confidently say that I have barely seen any information about Democratic nominee Joe Biden’s own past, policies, flaws or even goals as a president.

I am not surprised by the widespread frustration with the U.S.’s current leadership. As a president, Trump has had a wide array of failures, which range from downplaying the pandemic to regularly making racist or other inappropriate claims.

However, the media’s constant overemphasis of Trump’s shortcomings leaves us with little room to educate ourselves about who Biden is and how his presidency will impact the country.

Indeed, Biden’s minimal coverage may be attributed to a phenomenon known as echo chamber. By closely analyzing our interactions with content online, either through reposting, commenting or liking, the media begins to exclusively feed us the information we want to see. As a result, we become exposed to partial, one-sided content, often without even knowing it.

Therefore, it might be due to the echo chamber that I, along with many of my peers, have encountered predominantly Trump-bashing content online.

For instance, the media constantly accuses Trump of lying and disseminating misinformation. However, not once have I heard anyone expose the fact that Biden lied on frequent occasions.

Namely, Biden refuted Senator Bernie Sanders’ accusation that he attempted to cut Social Security, even though Biden has repeatedly argued for freezing this program. Not only would cutting Social Security bring about devastating consequences for the elderly, but repeatedly lying about his past actions highlights one of his major shortcomings.

In addition, according to the New York Times, Biden has played a decisive role in the launch of the Iraq war – a catastrophe that resulted in millions of deceased, injured and displaced individuals.

Aside from simply advocating for the war, in 2002, Biden was the chair of the senate committee on foreign relations, and had a considerable influence on the U.S.’ invasion of Iraq. Like with claims on Social Security cuts, he continuously denies his involvement.

Additionally, I blame Trump for his lack of action regarding one of the greatest emergencies of our time: climate change. Yet, Biden’s own 2020 climate policy received a D- grade from GreenPeace.

Similarly, the media frequently reminds me of Trump’s inhumane anti-immigration policies. Nonetheless,  according to ABC news, when Biden was Former President Barack Obama’s vice president, more immigrants were deported than under any other office.

I accuse Trump of disgusting conduct towards women. However, according to Business Insider, eight women have alleged that Biden has inappropriately touched them or made them feel unsafe.

Interestingly enough, we almost never hear about these aspects of Joe Biden; but whenever such information emerges about Trump, momentarily, it becomes the number one topic of all political discussions and posts online.

Hence a very important question arises: how can one cast an educated vote when information regarding the two presidential candidates is so unevenly distributed across the media?

Some of the shortcomings that we avidly advertise and claim to deplore about Trump are also manifested in Biden, yet we intentionally ignore and hide them away.

I know that Biden has a variety of positive traits and holds great potential as a prospective president of the United States. However, people should be educating themselves about him as an independent candidate, rather than an automatic upgrade from Trump.

Ultimately, the crux of the problem lies in the fact that in previous years, our voting came from genuine, justifiable support for the candidate. Now, we are no longer choosing candidates on well-founded grounds, as anyone who is not Trump already has a competitive advantage.

I completely support and acknowledge the public desire to bring about new leadership. However, by continuously bashing Trump, we are inflicting more harm by letting our personal biases hinder our knowledge of the two candidates.

Therefore, by spreading one sided content, we are not raising awareness, but rather are contributing to the epidemic of ignorance that already seems to drive this election.The only way we should be choosing our president is by conducting equally in-depth research on both candidates, without leaving out any evidence that contradicts our views.

We must keep an open mind and learn about the true impact of each presidency. Only with such knowledge will we be able to make the right choice.