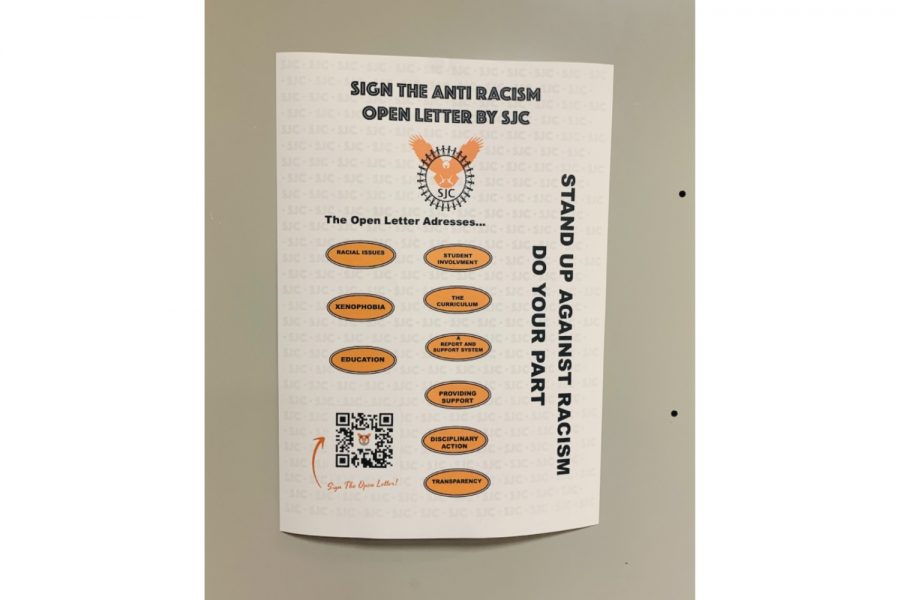 A poster requesting that students sign the SJC anti-racism Open Letter while simultaneously providing a summary of the concepts included in the letter hangs in the English Pod. Members of SJC wrote a letter addressing anti-racism within the High School community which students signed before being sent to administration Oct. 29.

The Open Letter, written by the Social Justice Council, addresses racism within the school community. SJC began formulating the letter at the beginning of October, and a student version of the letter was sent to High School students via email Oct. 25 and released to the administration Oct. 29.

The SJC composed two separate Open Letters intended for different groups within the community. The first letter was written for the administration; a longer, more detailed version that analyzed each issue present in the community and provided more detailed solutions and suggestions.

The other letter, aimed towards students and families, was a more summarized version of the letter to the administration. It was intended to be relatable, and focused on helping students understand the widespread concerns of students. Students were given the opportunity to commit to helping advance anti-racist work in the school by signing their names on the letter.

The Open Letter was created to both further community awareness and proactive change, as well as forge a connection by linking administration, faculty and students, where every member of the community works collectively to tackle racism within the school.

“Students have the agency and ability to feel that they can use their voice and write letters to have communication with the administration,” she said. “We want students to actively use their voices and challenge ideas, which is part of what it means to be a critical thinker.”

Jaworski also said the administration has been continually working on plans to address anti-racism that will be implemented in years to come, incorporating information included in the letter to further those plans. She said the work is not simply a “tick-box activity.”

In addition, SJC Co-President Zarina Choudhari-Stewart (’21) said the council hopes to shed light on many of the silent issues within the community.

Choudhari-Stewart also said that she expects the administration to “make their own decisions to foster a positive and welcoming environment for students of color and minority students.”

Furthermore, Jaworski said the administration has yet to discuss the content of the letter, but will view the actions suggested in the letter through the lens of education.

“Considering that we got the letter last night officially, we have to take time to go through the suggestions in the letter, particularly in the context that we are a school and we have a primary purpose of learning,” she said. “We want to reach and teach all students in the High School no matter where they are in their understanding of anti-racism.”

Moreover, Willa Blair (’23) said the letter took initiative and included important topics to address within the student body and to the administration.

“I thought it was very well done and was very bold,” she said. “They brought up things that are unspoken in the ASL community. There are a lot of things that they said that a lot of people agree with, but never talk about.”

In addition, Choudhari-Stewart said the primary goal of SJC is to bring collective awareness to unseen racial issues and incidents, and in turn, provide concrete evidence that spurs tangible, long-lasting change in the community.

“Our intentions are to just be heard and to have people acknowledge that this is an emotional topic,” she said. “There’s also grounds and evidence on which it lies to motivate people to start creating spaces for everyone to have these conversations and to ultimately change the school’s environment.”

Moreover, Blair said student signatures were extremely important, as it would help increase awareness about racism and drive change that will ultimately better the environment of the community.

Choudhari-Stewart echoed Blair and said that signing the letter was taking action and “as small as it may seem, it means a lot.”

Ultimately, Jaworski said she hopes that “we are able to have this be the beginning of a conversation and not the end of the conversation about how we collectively as a school move forward, while acknowledging that we are all coming at this from a different place.”