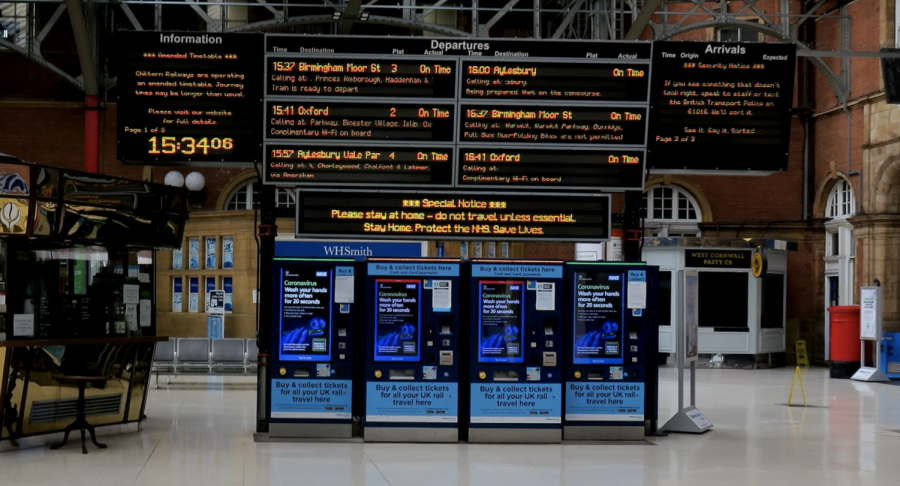 Photo used with permission from Kwh1050/WikimediaCommons

Marylebone train station stands empty April 2. The U.K.’s new lockdown, effective Nov. 5, could return many places that are typically very busy to a scene like this.

Non-essential shops, pubs and restaurants will be closed and trips out of the house should only be made if essential.

However, Taha Mikati (’21) said that keeping certain elements of the country open while closing others is not effective.

“I’m not a fan of this half-in, half-out strategy,” he said. “If they want to do a lockdown, they should do it properly.”

Johnson’s announcement is a near immediate walkback of the tiered system introduced in the past month, indicating another failure in the series of attempts taken by the government to control COVID-19.

Following developments in the government’s response, Mikati said that he foresaw more extensive measures on the horizon.

“The government were kind of gearing up for it all along,” he said. “They introduced the tier system a couple of weeks ago and the situation wasn’t getting any better.”

On the day Johnson announced the lockdown, the U.K. became the ninth country to reach one million cumulative cases. According to gov.uk, the seven-day case average increased by 13,023.6 from Oct. 1 to 30. This sharp increase has eclipsed even what the government had forecasted as its worst case scenario.

Mikati said that the government has failed in its approach since day one, and that the tiered system was just another attempt in its list of failures to control the virus.

“The tiered system, I think was a failure,” he said. “If the tiered system would [have] prevented us from getting to this point, then I would be fully supportive of it.”

As the COVID-19 crisis in the U.K. prolongs, many worry that “pandemic fatigue” could manifest itself under a second lockdown. Mikati said that this is very possible.

“I wouldn’t be shocked if less people respected the rules and if more people actually went out and socialized,” he said.

As it stands, the lockdown will be in place for a minimum of four weeks, until Dec. 2. The government has expressed hopes to open the country back up by Christmas, as it is a time for community. Mikati said that this timeframe could be realistic.

“I do believe they will open before Christmas,” he said. “But I wouldn’t be shocked if right after Christmas there was a sort of lockdown. Because obviously during Christmas, everyone gets together. It’s kind of this moment of community and, and union.”