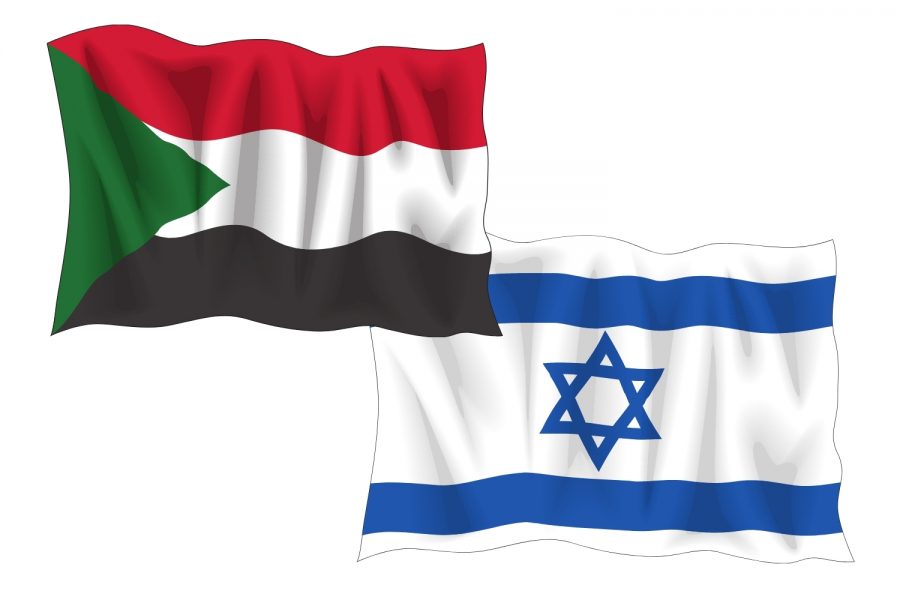 Israel and Sudan have agreed to normalize relations in a deal brokered in a three way call with the U.S. Oct. 23. This agreement makes Sudan the third Arab country to reach peace deals with Israel in the past two months, following the United Arab Emirates and The Kingdom of Bahrain.

Israel and Sudan have agreed to normalize relations in a deal brokered by the U.S. Oct. 23.

The Israel–Sudan normalization agreement makes Sudan the third Arab country to reach peace deals with Israel in the past two months, following the United Arab Emirates and The Kingdom of Bahrain.

Up until the last two months, Jordan and Egypt have been the only two Arab countries to officially recognize Israel, in 1979 and 1994 respectively. According to the BBC, President Donald Trump said that “at least five more” Arab states, including Saudi Arabia, are considering normalizing relations with Israel.

In the past, Arab countries have taken into account Palestinians before establishing peace with Israel, especially Sudan. The Arab League even met in Khartoum, Sudan in 1967 after the Six-Day War and issued the “The Three No’s”: no peace with Israel, no negotiations with Israel and no recognition of Israel.

Palestinian student Sara Fakhry (’22) said that the Israel-Sudan normalization is problematic, as it will ultimately make peace between Palestine and Israel more elusive.

“When regarding peace and moving towards resolution about conflict between Palestine and Israel, if more countries are normalizing what’s happening in Israel, it will become even harder to create peace,” she said.

In contrast, Daniel Phillips (’21), who was born in Israel, said that this deal will promote peace between Palestine and Israel.

“By having peace in the Middle East, it means we can get to the issue of the Palestinians and the Israelis and we can focus on it,” he said.

“For Israel, I think, you know, they’re probably pretty happy being recognized by another country in the Arab League,” he said. “Obviously Sudan is loving it, just because now Sudan is removed from the list of state sponsors of terrorism from the United States.”

However, Gladis said that he acknowledges how this deal may also harm Palestine.

“If I was a Palestinian, I wouldn’t be happy about it, because the more Arab countries that are supporting Israel, the less, you know, recognition Palestinians are going to get in many ways,” he said.

After announcing the deal, Trump told Congress he would formally remove Sudan from the U.S. list of states that sponsor terrorism, after the East-African nation was on the list for 27 years. Being taken off this list would subsequently unblock access to debt relief and foreign financing.

Fakhry said that being taken off the terrorism list was likely Sudan’s primary incentive for normalizing relations with Isreal.

“It kind of shows that they’re not really doing it to protect Israel, they’re doing it more as a way for them to protect themselves, which is kind of even worse,” she said.

Similarly, Gladis said that this deal was more motivated by economics as much by Sudan’s peace interests.

“It’s a total incentive for Sudan to make a deal with Israel just because Sudan is in a terrible position economically,” he said. “There are a lot of sanctions that are limiting them by being on that list. This isn’t a peace agreement at all. I mean, if anything, it’s not groundbreaking, it’s the United States arm twisting.”

“I think it’s not purely relations with Israel that took them off the list, because although I understand that Trump is a big supporter of Israel, I don’t think that he would put peace in the Middle East before the security of the American people,” he said.