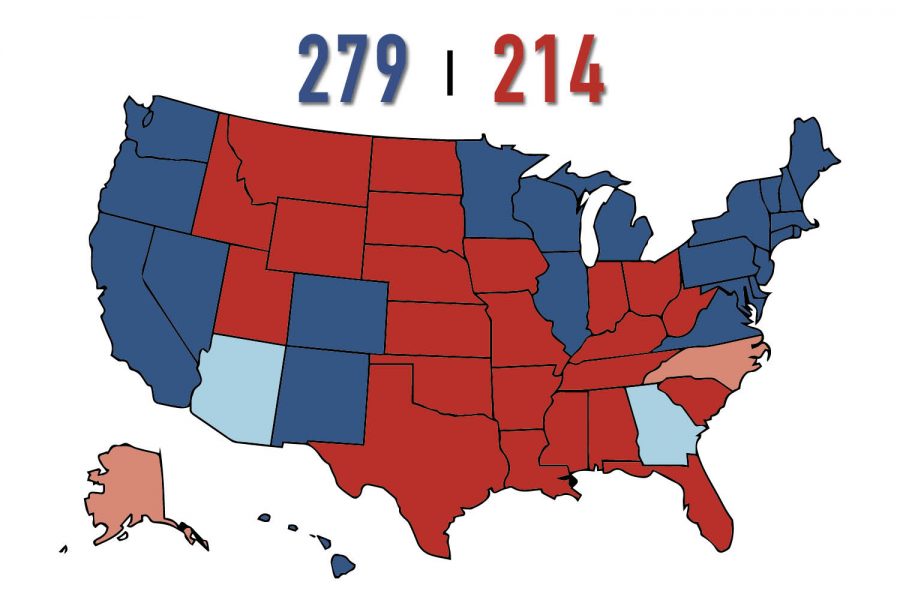 The current electoral map shows President-elect Joe Biden above the 270 vote threshold required to be elected the next president. Biden’s running mate Vice President-elect Kamala Harris will be the first woman of color elected to the vice presidency.

President-elect Joe Biden will become the 46th president of the U.S. Pennsylvania’s 20 electoral votes swung in his favor midday Nov. 7, propelling him above 270.

After a drawn-out counting process in many states, Biden’s birth state will carry him to the presidency on the very day he was elected to the Senate 48 years ago.

The result also means the U.S. will see its first ever female vice president in Kamala Harris; one of the many details that Max van Zyl (’21) said makes this election historical.

“America as a whole, as a country, its values are hard to define because it’s obviously become such a divided place,” he said. “But it does say something about what the country is trying to stand for when you have a Black woman as the vice president.”

“It’s a sign of progress in our society, that in the United States a person of color, a woman can rise through the ranks of society and become vice president,” he said.

Van Zyl went on to describe the feeling as “relief for the future as well, like not having to, at least starting in 2021, wake up to Trump’s idiocy and craziness.”

With somewhat of a different outlook, Brigui said he is disappointed that Republicans will not control the executive branch. He said he opposes much of President Donald Trump’s character, but appreciates his policy positions.

Brigui said that the fact that Republicans look likely to maintain their majority in the Senate provides him some solace, as conservative values will still have a voice in U.S. government.

While he supported Trump throughout the campaign, Brigui said that he will always be optimistic for whoever becomes the president of the United States.

Furthermore, Selma Hansen (’23) said that despite being “so relieved that Biden has won,” Trump’s division of the nation over the past four years may prevent Biden from tackling pressing issues such as COVID-19 and climate change.

“My concern is that like, Biden’s effectiveness is going to be blocked because of how polarized the country is, and like things that are not bipartisan,” she said.

Yet, both Brigui and van Zyl said they hope Biden is able to ease the deep divide present in the U.S.’ political and social landscapes. Van Zyl said that if Biden has one goal for these next four years, it will be to heal the nation.

However, Hansen said that polarization in the U.S. is too severe for Biden to resolve.

“I feel like a lot of damage has already been done,” she said.

Trump’s conduct over the past few days has been a point of contention. Trump, claiming widespread voter fraud and initiating legal challenges in various states, has said he will not concede the race until such processes play out. Van Zyl said he sees these suits as unlikely to have much influence.

“Not only is there not enough evidence of these things actually going on, but also … the little evidence that there is, it’s just not enough numerically,” he said. “Maybe they can show 100 votes, you know, but Biden’s lead in these places is like 10,000 votes.”

Brigui said now that the election is complete, he wants Trump to respectfully concede the election, citing 2008 Republican nominee John McCain’s concession speech as an example of how the loser should behave.

“I hope the Republicans pick themselves up and stop whining,” he said. “I hope Trump can see this like an adult and does the mature thing, but I don’t think he will sadly.”

Furthermore, Brigui said it feels like we are living through a critical moment.

“This will be an election which, in one or two generations, they study in AP U.S. History,” he said.