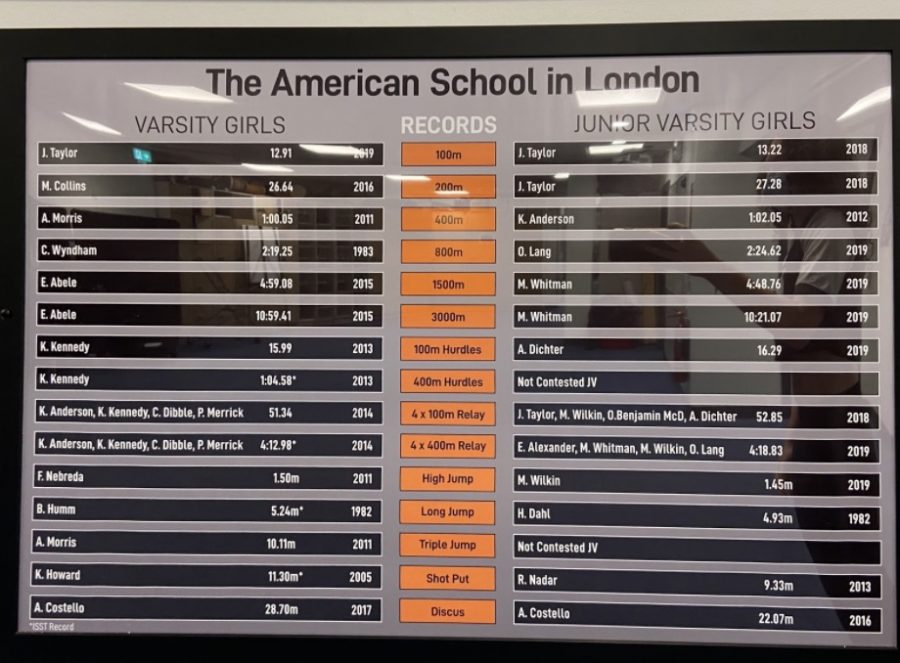 The boys and girls JV and varsity track and field teams’ records were put on display in the gym foyer Oct. 29. Members and coaches on the team reflect on the records and their significance.

After a two year process of finding and creating a poster of records, the boys and girls JV and varsity track and field teams’ records were put on display in the gym foyer Oct. 29. The idea came from Grade 3 Teacher Phil Tiller, who coaches the middle and long distance athletes.

As an athlete and coach at his previous schools, Tiller said he had seen record displays, and wanted to do the same at ASL.

“It’s a real point of pride for kids to see their name up there,” he said.

Tiller said it is really special for an athlete to walk by and see their name up on the board, especially now, when sports are currently not happening. He said he hopes people realize that the records were put up in “good faith,” rather than a means of bragging.

Tiller said the majority of the process was spent actually finding the records.

“Some were quite easy, and for others I had to dig through years and years of results,” he said.

Tiller said displaying the records “was a real team effort” as he was aided by other members of the community such as Athletics Director John Farmer who assisted in the logistical aspects of the project, including finding a location to put the poster and purchasing the frames. Additionally, MS Laptop Coordinator Simon Plissi made the graphics, and Maker Space Co-Teacher Colin McCarty printed all the needed materials in the MILL.

Tiller said all materials were printed on paper so that himself or members of the athletics department would have the ability to easily update any newly broken records at the end of each school year.

When she broke the 800m record May 2019, she said “I didn’t know I’d broken it or anything, so it was a surprise.” However in the moment, was only excited to have run a personal record.

However, she said Tiller thought it might be the record time, so he did some research and confirmed that she did in fact break the record.

While all sports have trophies and other awards, the record board is unique to the track and field team. Wilkin said this made her feel really accomplished and glad that all her teammates are given recognition.

When Wilkin first saw the poster, she said she was excited.

“It felt really rewarding,” she said. “I felt recognized.”

Lang, on the other hand, said it was strange to see her records being displayed so publicly.

“It is just weird to see out of all the 800m runs at ASL that I have the record,” she said.

In addition, at his previous school, ACS Cobham, Tiller coached four runners that broke the records he previously held, and said he felt more pride seeing someone he coached break the record rather than doing it himself.

“There is something really special about coaching and seeing an athlete rise and do something great,” he said.

If last spring’s track season had gone ahead, Tiller said he could have seen the girl’s team breaking more records.

“There are so many of them that are breaking records,” he said  “It’s like a team shattering of records. There isn’t just one superstar that breaks records and everybody else is okay. There are many many girls who can do it.”

Similarly Lang said, like many other athletes, she was sad about the season being cancelled, partly because she was planning on breaking records again.

“A lot of records on there are generally more recent records, so I think having them up is almost like a motivator to make you want to break them even more,” she said.

If the season goes ahead this year, Lang said she hopes to break the varsity equivalents of her JV records, as well as the 400m record.

“I am just really excited for what the future holds,” she said.

Tiller said the girls team is very strong and hopes he can get one more season out of the seniors. He also said that they are always breaking records, whether it be in general, or their own records, though these he said you might expect as the athletes have grown.

“They are really breaking their own records, one could assume because you usually get stronger as you get older,” he said.

Ultimately, even though the records will likely be broken, Tiller said he hopes that the athletes will never forget the achievement they once had.

“I would hope they’re standing by, 20 years from now they’ll say, ‘I have a record at my school,’ and they will know that it was there, even for a moment,” he said.