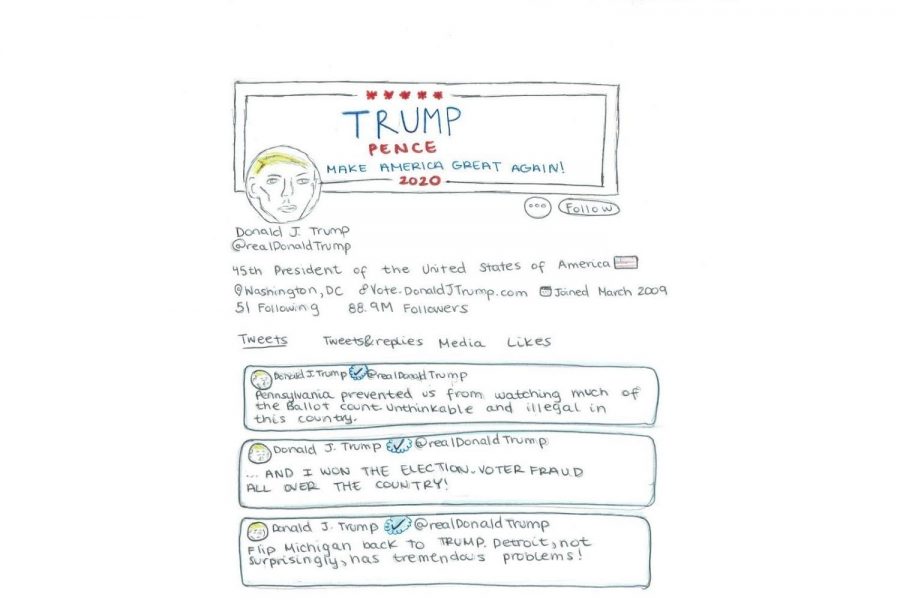 When used properly, social media can provide individuals with an invaluable forum to openly share, spread and discuss opinions and ideas on a variety of subjects. However, when it is used to spread misinformation, the users’ online voice must be muted and taken away accordingly.

When used properly, social media can provide individuals with an invaluable forum to openly share, spread and discuss opinions and ideas on a variety of subjects. However, when it is used to spread misinformation, the users’ online voice must be muted and taken away accordingly.

President Donald Trump has had a long track record of disseminating misinformation, ranging from lying about his inauguration crowd size in 2016 to consistently making fallacious claims regarding COVID-19. According to BBC, throughout his presidency, Trump has made over 20,000 incorrect or deceiving statements as such online, as well as during rallies and press conferences.

The lead up to the presidential election only intensified Trump’s unwarranted claims as he strenuously attempted and continues to hold on to his presidency by making biased, misinformed assertions. For one, ironically, he prematurely announced that he had secured a second term in the office back in October.

Even when the final election results surfaced, Trump refused to concede the democratic victory. Immediately, he attacked President-elect Joe Biden’s win, attributing it to voter fraud. Trump declared that the prohibition of observers from the counting rooms, in addition to the supposed influx of illegal, late and unauthenticated votes, swayed election results.

700,000 ballots were not allowed to be viewed in Philadelphia and Pittsburgh which means, based on our great Constitution, we win the State of Pennsylvania!

For instance, Trump even tweeted that “Pennsylvania prevented us from watching much of the Ballot count. Unthinkable and illegal in this country” Nov. 9, affirming his belief that the election was rigged.

Trump’s Twitter feed is flooded with such allegations. Yet, factual evidence remains scarce.

Consequently, Twitter has recently started to take proactive action to ensure that users are not deceived by Trump’s posts.

The social media app has implemented profuse control over Trump’s page by adding a warning sign on all of his potentially misleading tweets.

As he is a public figure, Twitter does not block or erase his posts. However, the warning signs are particularly effective in emphasizing Trump’s inaccuracy whilst pushing viewers to look at more reliable sources.

Similarly, other platforms have also started to take action against Trump’s promulgation of misinformation. For instance, on Facebook and Instagram, warning labels have also begun to appear on the President’s posts.

It goes without saying that censorship remains a topic of heated controversy and what should be categorized as unseemly is a strictly subjective matter. However, in regards to Trump’s presence on various social media platforms, the necessity of censorship can hardly be disputed: public knowledge is at stake.

Yet the consistent censorship of Trump’s posts elicited a mixed reaction from his supporters. Consequently, many of his followers set out in search of a new platform to fearlessly express their opinions without the threat of censorship.

Many have already migrated to the new “free speech app”, Parler. The app has been particularly prominent among republicans and right-wing conservatives since its launch in 2018.

However, the significant surge in users is directly attributed to Biden’s victory. While Trump himself does not have an account, many key Republican political figures, such as Sen. Ted Cruz, have recently joined the platform.

This new app indirectly endorses what platforms like Twitter, Facebook and Instagram vigorously oppose: misinformation. Parler is meant to give each user a voice by abolishing censorship and any fact-checking mechanisms. As a result, questionable and untruthful information runs rampant on the app.

For instance, it is common knowledge that COVID-19 cases are once again rising around the globe. Many countries are taking careful measures, such as closing down non-essential businesses, to mitigate the virus’ spread.

On Parler, however, numerous users have supposedly demanded a complete and immediate recovery from COVID, such as opening businesses and not wearing a mask. Thus, many of them have turned a blind eye to the U.S.’s growing mortality rates and scientific COVID-19-related data.

700,000 ballots were not allowed to be viewed in Philadelphia and Pittsburgh which means, based on our great Constitution, we win the State of Pennsylvania!

Such circulation of unchecked facts and unjustified opinions can be detrimental, which makes apps like Parler especially dangerous. Certain individuals, blind to objective and reliable facts, can be prompted to make uninformed votes and decisions that, in effect, are likely to impact the livelihood of the whole country.

Thus, while every single person deserves the right to be heard, censorship is, at times, imperative in ensuring that one powerful, yet potentially misinformed voice does not eclipse the truthful voices of others.

However, we should not only be relying on censorship to stop the contagion of misinformation.

We need to trace the roots of “fake news” and stop them at their very source before they are seen and absorbed by millions of people. We can start by thinking about whether we are digesting “fake news” as truth and spreading them further.

Therefore, all of us, especially the president of the U.S., carry a responsibility to not spread misinformation and know about the limits of free speech.

While misinformation has always been a grave issue, now more than ever we need to be wary of the fine line between fact and fiction. The U.S. needs more honesty, objectivity, and awareness, especially as it embarks on its recovery from the challenging year of 2020.