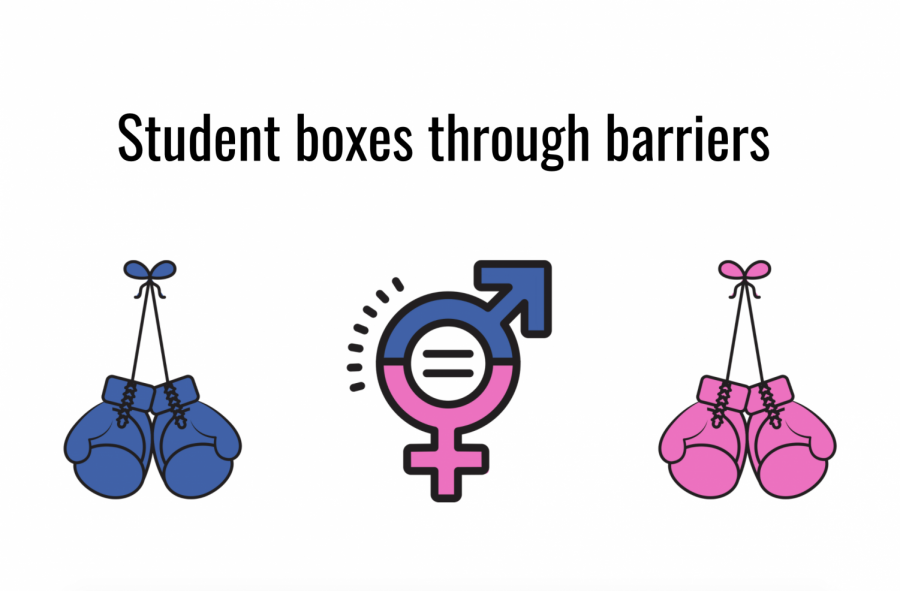 Since the second government lockdown beginning Nov. 5, Eva Eichenberger’s (’23) ability to train for boxing has been impacted. She shares her views on the gender inequality within the industry and the stereotypes she faces.

Eva Eichenberger (’23) took up boxing four years ago after her mother expressed concern for her safety. She said what began as an attempt to learn self-defense has transformed into a passion.

Eichenberger said she now boxes three times a week, although this past summer she trained up to five times a week.

Eichenberger said she begins every practice with a warm up, followed by a series of rounds with her coach. A round is when a timer is set for a short period of time, and the boxer hits the pads until the timer finishes.

Eichenberger said that her practices are very dependent on the weather as she trains outside in a park instead of inside a gym due to COVID-19 limitations.

“If it’s not too muddy, then it’ll be more boxing,” she said. “But if it’s muddy, then probably more just like static training, so, like, elastics and weights.”

Eichenberger said that the conditions of training outdoors are difficult.

“That’s like a huge shift I guess because in the gym, like, I know everyone in the gym, and like, it’s just really fun and kind of more laid back,” she said. “But then when you’re in the park, like strangers just stop and look at you and it’s like really weird.”

Eichenberger said that she has faced other setbacks in her boxing progress since last spring due to the pandemic.

“I was gonna start competing this February, but then COVID happened so that’s probably not going to be happening anymore,” she said.

Despite the current circumstances, Eichenberger said she tries to look for the potential good that could come of it, reflecting on the fact that she can now sharpen her skills without the stress of competing.

“In the long run I think it was not too bad just because I got to focus more on technique,” she said.

Stereotypes within the industry

Eichenberger said men significantly dominate the boxing industry due to a misportrayal of the sport in the media.

“A lot of people think that boxing is just for really big really muscley men,” she said.

Similarly, Eichenberger also said the media creates a fear of boxing due to its seemingly violent characteristics.

“It looks really scary on TV or like in major league boxing, but it’s honestly not that scary, and I think people need to realize that because it’s a great sport,” she said.

Eichenberger said that these stereotypes find their way to her gym as well. She said she often finds herself to be the only female in the building, and becomes frustrated when people underestimate her ability due to her gender.

“People automatically discard my presence just because I am female,” she said.

Eichenberger said she often feels the urge to speak up when people at her gym make assumptions about her, but thinks it is better not to start a conflict. Instead of retorting, she focuses her emotions into becoming a better boxer.

“It’s really hard not to say something back to them, but it’s important to prove myself,” she said. “Not to them, but just doing the best that I can. If I do start competing, doing well in competitions to actually be like, like women can do this and it’s like not as crazy as people thought.”

Pursuing boxing in the future

Although boxing is Eichenberger’s passion, she said she is unsure if she will pursue it professionally or in the long-term future.

“It’s more of just a hobby right now,” she said. “I think I would if there was a club in college or whatever, I would probably like to do that.”

She also says it is unlikely that she will compete at a higher level due to the immense dedication it takes.

“I don’t think I’m ever going to compete super seriously,” she said. “It’s a lot of work, and it’s really difficult to train for.”

In addition to the benefits boxing provides in terms of safety and protection, Eichenberger said boxing is also a source of exercise.

“Boxing is just like a really good sport to get fit, and like you do gain a lot of muscle by doing boxing,” she said.

Eichenberger said that the sport also provides an opportunity for many memories. The final time Eichenberger was at the gym before it closed, she said she was playfully fighting with her trainer when she accidentally hit the owner. Eichenberger threw her head back and laughed as she described this day for her and those involved.

“It was really, I don’t know, just like really funny and overall a good memory because that was like one of the last times I was in the gym, and I remember just like laughing,” she said.

Despite the sexism Eichenberger may face, she said she retains a strong relationship with her trainer and has found the boxing community to be a supportive family environment.

“There’s a lot of good memories there,” she said.