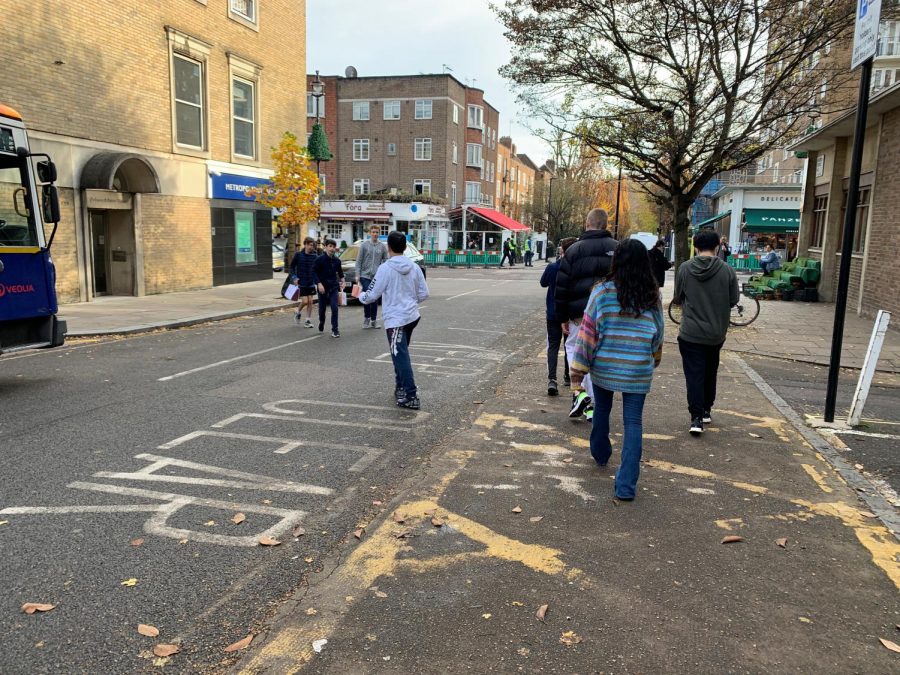 The open campus lunch policy was imposed by the school administration Nov. 9 until Dec. 2 due to the second national lockdown. Students reflect on its effectiveness.

The open campus lunch policy, imposed by the school administration Nov. 9 until Dec. 2 due to the second national lockdown, has resulted in differing opinions among the student body regarding its effectiveness.

The policy allocates each grade level a specific day when they can go off campus: Grade 9 on Mondays, Grade 10 on Tuesdays, Grade 11 on Thursdays and Grade 12 on Fridays. Wednesday is reserved for Advisory lunches with seniors allowed off campus if permitted by their advisor.

When students are not able to go off campus, there are alternate areas of the High School available for lunch, such as classrooms and the commons.

Since freshmen traditionally get open campus privileges in the second semester of the school year, some question whether or not they should have been allocated an off campus day.

Madeleine Ashton (’21) said she understands why it is beneficial for Grade 9 students to be let out for lunch.

”If the freshmen didn’t get to go off that one day, then they would never have any social time just because of the way the new schedule is,” she said.

On the other hand, Zain Rafiq (’24) said although there is controversy, there are potential solutions. One includes allowing Grade 9 students to go off campus on Fridays since when holidays occur there is usually no school on Fridays.

“It would be better if freshmen had Fridays since most of the holidays take place over a Friday, so seniors would be less angry,” he said.

In addition, there has been criticism around the grades’ lunch days being on the same day of each week.

Aurelia Peterson Rajalingam (’23) said she likes the concept of being allotted one open campus day but said it should be rotated so that each week the grade level gets a different assigned day.

Similarly, Rafiq said the policy limits students’ social life in school. He also pointed out that when your friends have a different lunch from you on that day you can not eat with them.

“Last week, I couldn’t go outside with my friends so it’s a bit irritating which days you have to stay in and out,” he said.

When students have to stay on campus, they are advised to eat in the classroom where their next class is taking place with their teacher monitoring them.

Adam Kollek (’22) said utilizing the classrooms is an effective way to ensure the safety of the students.

“It is a good solution to eat in your classrooms because you’re definitely socially distanced, you’re all eating at your own tables, and the time you have your mask off is pretty limited,” he said.

In addition, Ashton said students tend to follow safety measures more strictly within the classrooms compared to in the cafeteria.

In addition to the classrooms, students have the opportunity to utilize many outdoor spaces.

Peterson Rajalingam said going outside during the day can improve students’ mental health.

“A lot of the times we’re stuck inside, so it really helps to get fresh air,” she said, “That can really help just clear your mind.”

Despite these alternate spaces, Kollek still considers the large student gatherings in the cafeteria to be an issue.

He said he feels less safe after the implementation of the policy due to students closely grouping together.

“When you’re waiting in line for the cafeteria, you’ve got five people within arm’s length, so I definitely think that, COVID wise, going out onto the high street looks a lot better and safer,” he said.

Similarly, Rafiq said he felt more safe prior to the implementation of the policy and said social distancing is better followed outside than on the school campus.

Furthermore, Kollek said his bubble is actually smaller off campus than in the cafeteria.

“Being in school isn’t necessarily interacting only with people inside my bubble,” he said. “If we count the school as my bubble, my bubble suddenly got a lot bigger.”

Ashton said there is proof the virus spreads less effectively outside than inside. She said as a result, even if you walk past a stranger, “it’s safer than being in such a close contact space with 50 different kids.”

Both Ashton and Rafiq said that an effective improvement to the policy would be to allow two grades to go off campus everyday, making the cafeteria less crowded.

“It’s so hard to try to control this virus, and the school is definitely trying to implement these policies,” Ashton said. “At the same time, students are going to do what they want, so they can put stickers everywhere, but kids are going to want to socialize. It’s almost a little bit backwards because the cafeteria is so packed, and there’s no way that social distancing is happening there.”

Similarly, Kollek said the school has a responsibility to create a safe environment, but he does not entirely agree with the policy. He said an adjustment could be to allow students to go home for lunch, which would decrease gatherings in the cafeteria.

“Giving kids the option to go home is really important,” he said. “Eating at home is pretty much ideal because for kids who do live close to school, and there are a lot, it is one less person who has to take up space in the cafeteria or take up space on the high street.”