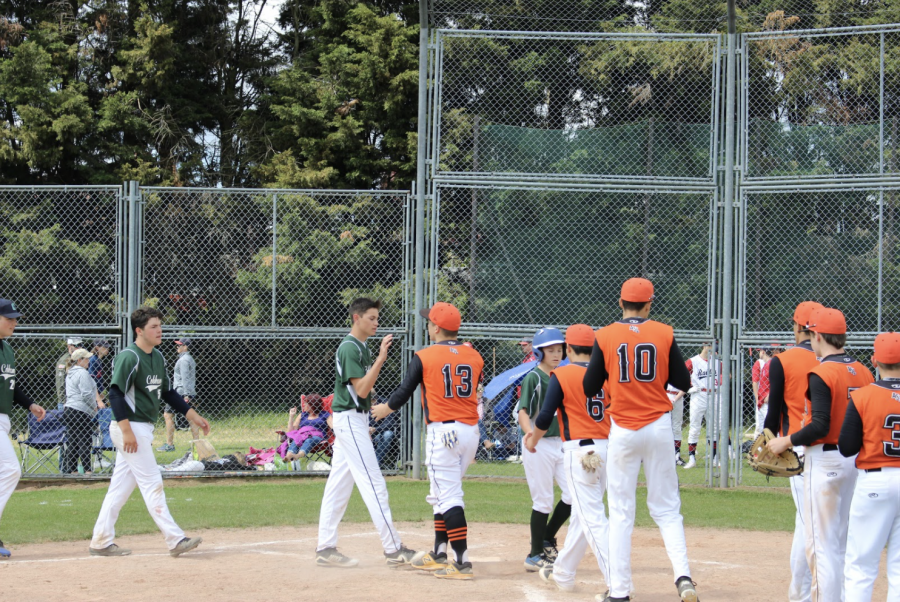 The varsity baseball team shakes hands with ACS Cobham after an ISSTs game in 2019. ASL hosted softball and baseball ISSTs at Canons Park, and both teams won gold.

After the cancellation of the fall and the beginning of the winter sports season, lingering questions surround the possibility of the spring and the rest of winter sports taking place. When thinking about their future plans, students are taking into consideration the rapidly changing COVID-19 circumstances, and what that might mean for sports they are trying out for.

Maisie Rosenberg (’24), who plans to try out for softball in the spring, said how in a team, everyone is “forced to work not just individually to improve, but to work as a team and improve yourself as a unit.”

Jay Heyman (’21), who was going to try out for basketball in the winter, said that a large part of the bonding in sports comes from the trust that you have to put in your teammates.

Charlotte Bernhard (’24), who plans to try out for softball in the spring, said those who play sports are able to escape from academic stress.

“It’s good for our mental health and our mental wellbeing to get to be on a team and escape from academics and the world,” she said. “Some kids do athletics to get away from academics, and others do other things like different clubs. But for people who do athletics, like me, it’s hard because we can’t do that right now.”

Arthur Sadrian (’23) is currently participating in the running club, a student organized substitution for the cross country team, and planned to do swimming in the winter and track and field in the spring.

Similarly to Bernhard, he thinks that sports allow him to concentrate more during academics.

“I miss out on the fact that sports really do help to clear my head and make it easier for me to concentrate during the academic day,” he said. “In that way, they’re sort of interlocked, and were sports not to happen, that would prove somewhat detrimental to my academic state, not to mention my fitness.”

“Looking at what the NBA have done, although obviously we can not do things up to that standard, they’ve taken precautions in wearing masks when they’re not playing on the court and keeping socially distanced when they’re in practice as well,” he said. “If we take the right precautions, then we can limit the amount of contact we have with individuals, even if it is in a sport that is quite close contact.”

In terms of the precautions needed to be taken for sports, Bernhard said there are ways to lessen the risk imposed through equipment sharing.

Although players touch the same ball in softball, “as long as you don’t touch it when you bat, the other team can just pass it around in their bubble,” she said.

She also said that softball is a game where players tend to be spread out.

“The closest you would be to someone on another team is when you’re on a base and running,” she said.

In terms of precautions, Rosenberg said that transportation for off-campus practices and games would be more challenging. Playing the sport with these precautions may decrease the number of games with other schools.

“It would definitely mean fewer games,” she said. “I think practice would be harder because, when you travel, you’re in a small bus together or like the tube, and it’s a lot harder to travel.”

Rosenberg said a lack of games combined with the large amount of practice sports required would discourage her from doing a sport.

“If we were still practicing as much as we would in a normal season, I think it would be kind of a deterrent just because it does involve a lot of practice, and having that practice and not being able to go play games is quite disappointing and sad,” she said.

In addition, Heyman said that as well as the general passion for playing the sport, a large part of sports’ appeal for students is the competition aspect.

“Obviously the whole reason why people play is because they love the sport, but also another big need [for what] people want from a sport is the competition,” he said. “People love having competition.”

An additional factor that may make students rethink their decision to participate in a sport is the possibility of a quarantine if someone on their team contracts the coronavirus.

Bernhard said she would be willing to make that sacrifice to play her sport.

“It might wipe out a lot of people, for having to do continuous learning, but I think a lot of athletes would take that trade so that they can play the sport they want,” she said.

Since in person fall sports were cancelled, the crew team did online fitness practices to adapt.

However, Sadrian said that it will be challenging to replicate the High School sports experience online with his sports.

“I’ve got my own ways of doing fitness at home, and I don’t really need school interference if it’s just going to be online,” he said. “What I really get out of it are the in-person meetups, and it’s just not the same online.”