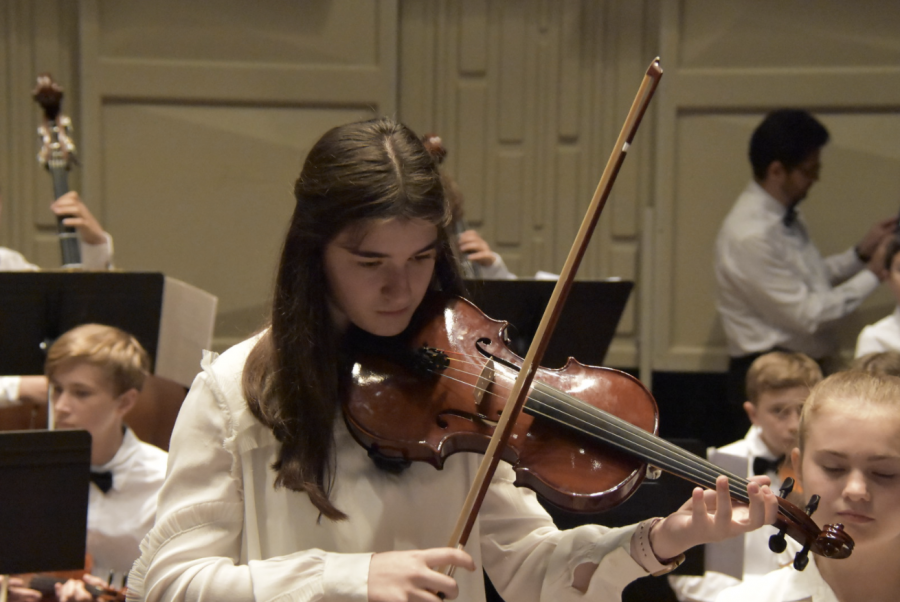 Danielle Hajjar (’23) plays her viola in the AMIS Orchestra in 2019. She played a solo jazz piece in Russia during the festival.

After a long day of school, Danielle Hajjar (’23), Eli Anderson (’22) and Chris Ghantous (’21) return home in search of an outlet for relaxation. For these three students, this outlet is music.

Hajjar said she uses music as an escape, and plays the viola to alleviate stress.

“Whenever I’m stressed out or I have a lot of my mind, I always know that there’s something I’m decently capable of that I can rely on and express my emotion through,” she said.

Similarly, Ghantous said he used the drums to ease the transition from Dubai to London.

“I moved last year and I was new and that was pretty rough,” he said. “Just having an instrument that I was good at and it was, you know, again, very helpful.”

As for Anderson, he said his ability to sing and play the piano has been beneficial to his upbringing.

“I was really not a great kid at home,” he said. “My parents would be really worried about me going to school and, like, how I behaved at school because I was terrible at home. As soon as I started getting into music there was sort of a shift they saw, and, and how I was behaving.”

Both Hajjar and Anderson have family members that are musicians who they said have served as role models and inspiration for their musical endeavours.

“I look up to my brother,” Hajjar said. “I feel like he’s a very dedicated musician and he has accomplished a lot with his work.”

Meanwhile, Anderson cites his father as an influential figure for his music, and said that he got into music as a result of his father being a musician.

Likewise, Ghantous said he became inspired to play the drums because of his mother, who had a passion for music. Even though she does not play an instrument, he said she still wanted him to play an instrument.

“My mom kind of projecting her, her desire to be a musician onto me, and it worked,” Ghantous said.

Each musician plays a different type, and this is reflected in their favorite musicians. Ghantous said drummers from two different bands were his favorite artists.

“Josh Dunn from 21 Pilots, I love them as a band, in general, and then Matt McGuire who, I think he’s the drummer for the Chainsmokers,” he said.

Ghantous also said he admires Charlie Puth, a singer, who he described as a “musical genius.”

“I would probably say it’s a lot of 60s artists like Sam Cooke and Otis Redding,” he said.

In contrast, Hajjar said she prefers more classical music, and that composer Sergei Rachmaninoff is her favorite artist.

Ghantous described a scenario of a rough day after school, where he said he was able to use music to help him through it.

“You get to come home and pick up two sticks and slam something as hard as you can and it kind of sounds nice,” he said.