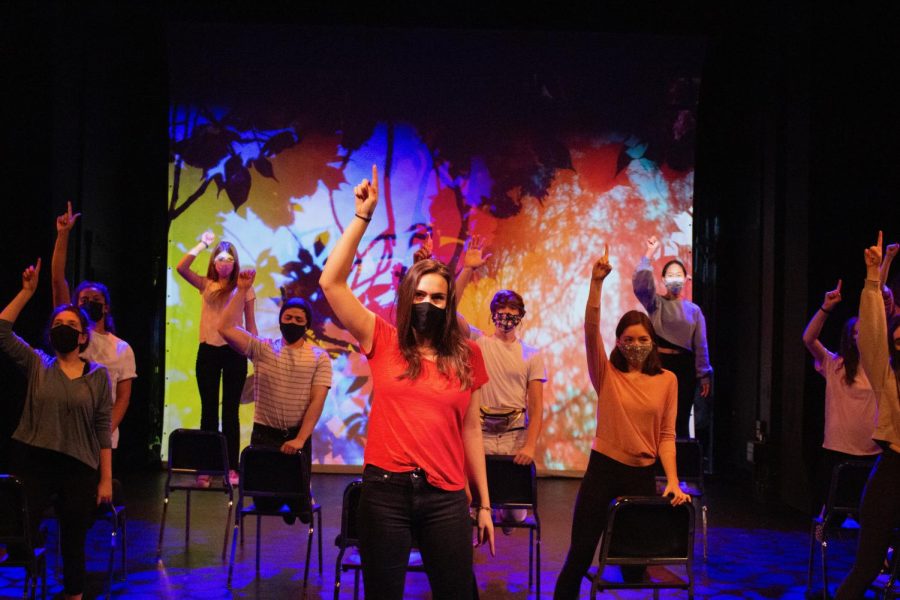 Students rehearse the main number in the musical “Fame.” This was one of the few rehearsals in-person, as most took place over Zoom. The final production will be on the ASL website Dec. 18.

Every year, students participate in the annual theater production. This year, however, the theater department has had to adapt the show due to COVID-19 restrictions.

Initially, the department had chosen “Little Shop of Horrors” as the musical this year, but Performing Arts Teacher Todd Sessoms said it was necessary to change it to “Fame the Musical” for a multitude of reasons.

“When we choose ‘Little Shop of Horrors,’ we had all sorts of plans to be able to do a live production on campus that we would virtually stream to the audience,” he said. “As the rules evolved in August and September after we did auditions, we got more clarity from the government and from our own board in terms of evolving policy. It became increasingly clear that we could not do a performance together.”

Bearing this in mind, Sessoms said he knew that changes to the show were inevitable.

“When the first case cropped up in the High School, that’s when the school made the decision to cancel all after school activities,” he said. “Once sports, theater and robotics were canceled, then we had to go to a 100% virtual platform. When the virtual platform was chosen, we knew that there’d be no way to do a ‘Little Shop of Horrors.’”

Similarly, Dean Papayoanou (’21), who is playing Nick in “Fame” said that the intricate storyline might have made it difficult to execute “Little Shop of Horrors” virtually.

“I knew that it was going to be very difficult doing ‘Little Shop of Horrors,’” he said. “That’s a very complex piece in terms of set and costume. Considering all of the big restrictions that came around the time that the play was finally chosen, I wasn’t surprised.”

After canceling “Little Shop of Horrors,” Sessoms said he had to find an alternative that would be easier to accomplish and execute on an online platform.

“I took a look for other shows that might fit the platform that we were going to have to do, and the one that kept coming up, time and again, was ‘Fame,’” he said. “‘Fame’ is a musical that is set in the 1980s and takes place at a real school. The reason we chose it was not for the music or the dancing, but just the idea that conceptually having this school go into the same situation that we’re in right now, knowing that artists all over the world are finding ways to adapt.”

“Incorporating Zoom and making distance learning part of the show was smart,” she said.

Given the online platform, Sessoms said the show is much shorter than the usual live productions. He decided to use the junior version of the show simply because it was the shortest.

“It’ll be under one hour, ultimately close to 45 minutes,” he said. “We just know any more time than that on Zoom, on-screen, as performers and as an audience, we don’t have the stamina to sit and watch a two and a half-hour long Zoom production.”

Due to the shorter performance, students shared varied opinions about retaining the authenticity of the musical. Saunders said that the story of a character named Carmen has been altered in the junior production, who dies from a drug overdose in the original play.

“There was this huge song and scene about how Carmen ended up in LA and her experience there,” he said. “I think that was pretty deep, but it’s not in the junior show. Fair enough, because it’s not appropriate for younger kids, but it’s still such an important part of the show and just enters the storyline very well, which the junior production doesn’t get to show.”

Like Saunders, Claire Heskett (’21), who is playing Carmen in the musical, said the depiction of the character’s substance abuse varies from the original musical.

“There’s no explicit reference to her overdose in our script or in our musical at all,” she said. “I think we found a good middle ground. It’s important to treat it seriously and not take it lightly, but it doesn’t necessarily need to be left out.”

Papayoanou said that the mature themes in “Fame” give the community a bigger picture of theater as a whole.

“It’s powerful because ‘Fame’ is all about trying to make it in this cold, unforgiving industry that is theatre, dance and art in general,” he said. “Some of the big things that are a part of that, sadly, is this tragic loss that is due to drugs, things like perpetual ego, that does drive a person in the end to failure.”

Papayoanou reiterated that the themes in “Fame” are important to acknowledge such as Carmen’s drug abuse, as they give insight about real-life high school issues.

“It’s taboo, of course, especially if kids are going to see the play, it’s a topic that is hard to talk about,” he said. “But at the same time, I personally feel that there is an injustice in us not speaking about it.”

However, Papayoanou said he is not concerned about the authenticity of the show, despite the many alterations.

“The original was about these people with these intense problems, but these problems don’t go away in our revised version,” he said.

Along with the adaptations made in the length and content of “Fame,” the changes made to online rehearsals pose another obstacle.

Ruby Read (’23) said the whole rehearsal process was a drastic shift from last year’s production, “Les Miserables,” since they are now online.

“From an actor’s perspective, it’s honestly a lot more challenging because in last year’s show, we had a lot of communication and physicalization,” she said. “Being in a space with a bunch of people created an amazing energy,” she said.

Similarly to Read, Heskett said the physical aspect of the musical has completely changed.

“We’ve had one rehearsal in person where we weren’t allowed to sing but we were choreographing,” she said. “We have one or two songs that are going to be choreographed on stage, but the majority of like choreography has to be suited to just our Zoom format.”

In addition, Papayoanou said that the acting experience shifted for him due to the Zoom rehearsals.

“I personally think it’s a bit more difficult,” he said. “In your room, sitting down, trying to emote without just kind of feeling dumb. I think after all this time doing it on stage, for me personally is more difficult, trying to show these emotions, trying to say these lines with all the intensity that I probably would on stage.”

Furthermore, Saunders said online she is more inclined to look for the faults in her acting.

“On Zoom, you can see yourself and you can see what you’re doing, which you don’t necessarily get to do on stage,” she said. “That’s both nice, because you get to say, I need to be more or less of something, but at the same time it allows you to be more critical of yourself.”

Despite the various obstacles, Heskett said she enjoyed the experience.

“It’s been really fun so far and I think everyone feels that even though we can’t be in the same place, we’ve still built our little theatre community this year,” she said.

Like Heskett, Sessoms said he feels melancholy about the disconnect that the online production brings, but also said the cast has been able to bond amidst the challenges

“I personally tremendously miss the chance to work with students together in person, the energy and the successes that we have in the moment,” he said. “The fact that we have been able to create a sense of ensemble even though we’re not together in the same space is a testament to how hard the students are working and how much of themselves they are giving to this project. And that’s, as a teacher, that’s inspiring.”