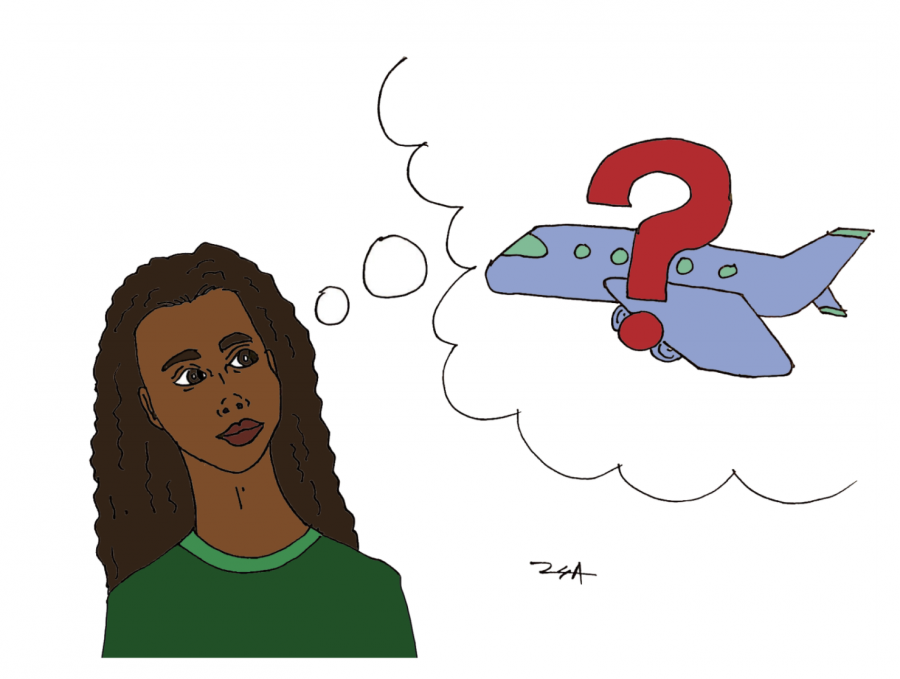 COVID-19 has caused travel restrictions, leaving many students having to quickly change vacation plans. High schoolers reflect on how the restrictions have impacted previous plans, how they will impact the future, and the effects of not being able to travel.

As a result of the pandemic, traveling has become less accessible due to travel restrictions, quarantine obligations and general health and safety precautions. Kiki Agyei (’23), Sage Saunders (’24), and Tyler Ketchum (’24) are some of the many students in the High School who have had to alter their travel plans in consideration of these travel restrictions.

According to an online survey conducted by The Standard Oct. 30 to Nov. 2 with 157 student responses, 4.5% of students traveled abroad, 24.8% traveled within the country, and 70.7% did not travel at all during the October break. Comparing this to the results of what students plan to do over December break, 45.9% of students plan to travel abroad, while 43.3% plan to stay in London.

A factor that plays a large part in students not being able to travel is the need to self isolate, which poses the possibility of missing school.

Agyei traveled to Sweden over October break and got the chance to visit her best friend who lives there. She said the trip destination was convenient since she and her family wouldn’t have to self-isolate in the weeks preceding the trip.

“It was a little bit unsure whether we would need to quarantine, but it turns out that, before we left, we knew that we wouldn’t be going to an orange or red zone, so I wouldn’t have to quarantine after coming back,” Agyei said.

Meanwhile, for October break, Saunders travelled within the U.K. to the Cotswolds in the southwest of England. She said it was a change for her family, considering how frequently they travel abroad.

“It’s still very interesting, and a beautiful experience to travel within the U.K., but we wouldn’t normally think of it because we would be more focused on traveling to other big cities or going somewhere not close to home,” she said.

Saunders said that her family decided to travel within the U.K. because they wanted to avoid having to self-isolate.

Similarly, Ketchum also traveled within the U.K. to Scotland. He said that his family decided to travel there since the virus was more contained there, and his family also would not have to go far.

“We wanted to choose somewhere to go that geographically makes sense in terms of the spread so not leaving the island and not traveling to another country,” he said. “Within each individual they need to think whether this is safe for themselves, whether it meets the regulations, and whether they think that the risks of bringing a case into another country outweigh the benefits.”

During summer when the virus was at an earlier stage of development, some students had to quickly change plans for their summer vacation, meaning they wouldn’t be able to see any family members who live abroad.

For Agyei, it has been difficult trying to coordinate a time to see both her family in California and her older sister who lives in Amsterdam.

“Everything just feels like, you never know what’s going to happen, so you have to hold off until days before you know you’re not going to have to quarantine,” she said.

Saunders also has family in the U.S. and Canada, and said she tries to keep in contact with them through technology, but she said it is not the same as in person. Other disadvantages of being unable to travel for her include not learning about new places through seeing them firsthand and not getting to take a break from work.

“Traveling is such a huge part of who I am and how I grow as a person, so I miss having those experiences where I can learn more about myself or take time off and relax after doing hard work,” she said. “I’m looking forward to when quarantine ends, when everything can get back to normal, and people who love to travel can do what they love again and travel.”

On the other hand, Ketchum said not travelling does not feel like as much of a barrier to seeing his family as a result of the technology that has been developed.

“Most of my family members live in the United States, and I think that the world is connected enough that it doesn’t really affect it beyond being there with them physically,” he said.

Despite this, as a result of COVID-19 restrictions, many students are uncertain on their future vacation plans. Agyei usually travels abroad over winter break, but their plans are now undecided.

“Even though Christmas break is really long, it’s super uncertain where we could be going,” Agyei said.

Ketchum plans to travel to Denver, Colorado during the December break, but, with the exception of summer vacation, that will probably be the only break that he will travel abroad on.

“In December break, we plan to travel back to the U.S. and self-isolate afterwards, and that’s because it’s three weeks,” he said. “We think it is worth the risk, but on any break shorter, no.”

Saunders said she plans to travel somewhere within the U.K. during the American new year, and although her family has booked tickets to travel abroad for summer break, she said the booking is uncertain and was done at a time when it was easier to get good reservations.

“Mostly we travel inside the U.K., mostly to get a change of scenery because you never know when you’re going to go into full lockdown again and you’re going to be stuck in your house for a long amount of time,” she said.