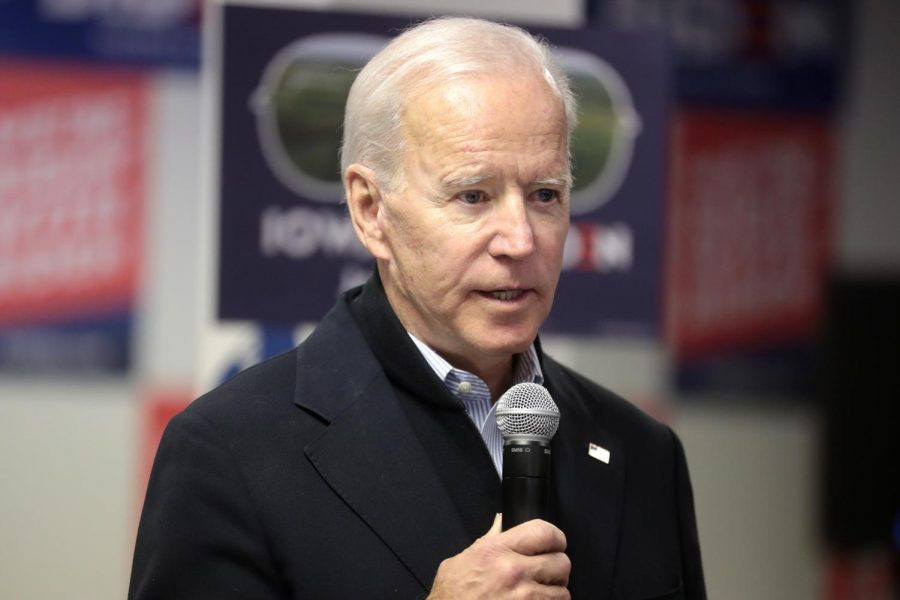 Joe Biden speaks in front of an audience at his presidential campaign office in Des Moines, Iowa Jan. 13, 2020. Biden has struggled with a speech disorder since a young age and it has persisted in his political career.

Throughout my life, I have been predisposed to the notion that individuals with critical communication, intellectual or otherwise disabilities are inherently unable to pursue certain professions, including careers in business, hospitality and politics. However, President-elect Joe Biden upended my preconceived beliefs.

Since boyhood, Biden has struggled with a stutter, a speech disorder that frequently inhibits individuals from cohesively vocalizing their thoughts. According to Mayo Clinic, stuttering is an easily recognizable condition, with repetition of certain words/syllables, prolongation of certain sounds, mispronunciations, and frequent tongue-slips being the most common symptoms.

Biden has not only grown up with a stutter, but he is also one of the few individuals whose speech condition persisted into adulthood; in fact, less than 1% of all adults are affected. Thus, it is no surprise that his communication disorder has profoundly shaped his proffesional relationships, as well as his current political career.

Strong public speaking skills are indispensable for politicians. Advancing political agendas and gaining support from the public would be impossible without persuasive speech tactics. It is also typically known that a profession in politics requires constant political correctness, with the smallest slips of tongues leaving an appreciable strain on one’s career.

Verbal gaffes, though accidental in their nature, can lead to extensive public criticism as it is difficult to prove that a slip-up was really a well-meaning mistake, rather than genuine ignorance or ill-intent. Thus, while depending on the scale of the error, politicians’ reputations can suffer a massive blow.

While Biden was able to win the 2020 election and secure his spot as the 46th president-elect, his stutter has vastly affected his appearance in the public eye.

In the merciless battle between the Democratic and Republican parties leading up to the election, each side employed all the resources and tactics available to dig up dirt on their opponents and advance their victory.

Thus, supporters of President Donald Trump have frequently built a case against Biden by referencing his tongue-slips. I have frequently observed Biden’s verbal gaffes quoted out of context by politicians who strove to paint him as controversial and altogether unfit to fill the presidential role.

For instance, at a town hall in Des Moines, Iowa, hosted by the Asian & Latino Coalition in 2019, Biden accidentally misspoke by saying that “poor kids are just as bright and just as talented as white kids.” After a long pause, however, Biden added, “Wealthy kids, Black kids, Asian kids.”

His tongue-slip was enough to instigate months-long debates regarding his genuine views on minorities and impoverished communities. Even in the months prior to the election, this verbal gaffe continued to be used against him.

A more recent example occurred during one of Biden’s presidential debates with Trump, when he accidentally referred to “Proud Boys,” a white supremacist group, as “Poor Boys.”

Numerous Trump supporters used Biden’s gaffes against the Democratic nominee, not only mocking his stutter, but also using it as an indicator of his deteriorating mental state and acuity. Thus, Biden’s disability was constantly held against him and used to position him as an unworthy candidate.

Nonetheless, Biden was able to overcome the challenges that arose from his stutter,  becoming an empowering figure for individuals struggling with communication disorders.

According to NBC Boston, Brayden Harrington, a 13-year-old boy with the same speech condition as Biden, said he felt confident in seeing an adult-like him represented on such an influential platform, and was impressed by how an individual with a stutter could come so far. Harrington even met Biden, and during their short meeting, Biden endowed him with tips on overcoming his condition.

Growing up with a stutter can be particularly challenging because many of the socializing environments that kids rely on to form connections with peers can further exacerbate disfluent speech, and instead, turn into a source of distress. According to MayoClinic, stuttering makes these kids susceptible to bullying, often resulting in acute self-awareness and social anxiety that can affect them for years to come. Thus, for young people like Harrington, Biden’s presidential election has the ability to carry a lasting example of strength, power and the ability to turn hardships into defining traits.

Harrington is only one story out of millions. According to National Institute on Deafness and Other Communication Disorders, there are approximately 6 to 8 million people across the U.S. suffering from some type of language disorder. Therefore, many will likely find comfort in the idea that someone like them is representing the entire country. What’s more is that, as the president, Biden will break down the stigma surrounding speech impediments.

It goes without saying that Biden’s inability to always express himself clearly and connect with the audience can be a significant disadvantage.

However, in the case of Biden, his tongue-slips are quickly outweighed by the inspiration his presidency will carry for generations to come.