Vaccine rollout indicates pandemic end may be in sight 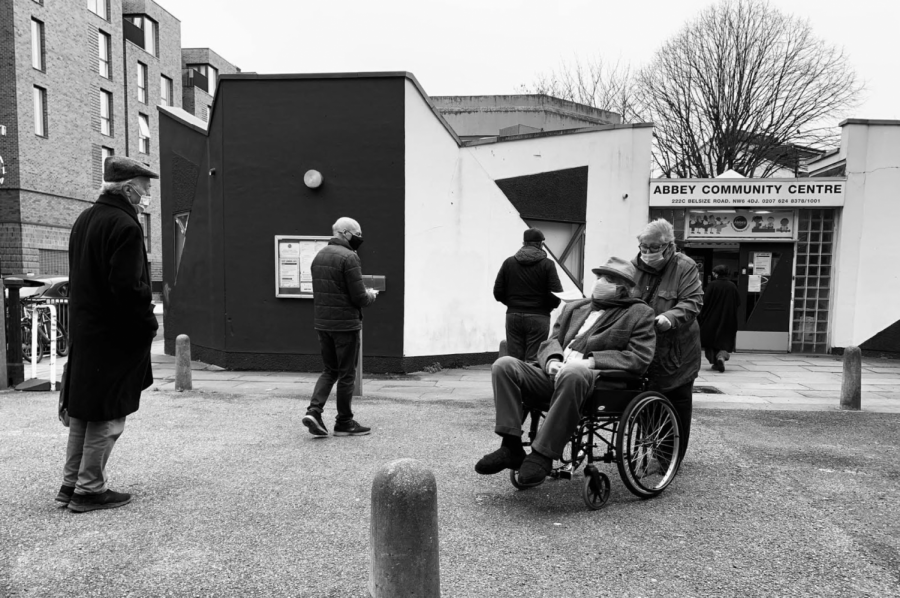 Members of the public queue outside the Abbey Community Centre in Kilburn to receive the COVID-19 vaccine Jan. 21. The first phase of the vaccine rollout, taking place now, is composed of nine priority groups which include all of those over 50 years old, those with pre-existing conditions and frontline health and social care workers.

In March 2020, when campus closed and COVID-19 made its first direct impact on the community, Maddie Wilkin (’22) said the future looked bleak, filled with Zooms, masks and other lockdown normalities.

Coping under the second period of school-wide distance learning, many feel the vaccine could provide light at the end of a dark, yearlong tunnel. Nearly a year since the first campus closure, Ludovico De Giorgi (’21) said the prospect that the pandemic may be nearing its end feels “surreal.”

The U.K. became the first Western country to approve a vaccine Dec. 2, administering the first dose Dec. 8. Pfizer-BioNTech’s partnership won the race to approval ahead of two other primary vaccines – Moderna and Oxford/AstraZeneca – both of which have now been approved for use in the U.K.

The vaccine’s rollout coincides with the implementation of the U.K. Government’s new national lockdown measures Jan. 4. A new variant of COVID-19 that increased transmission rates across the country induced the fresh wave of restrictions.

Despite a new variant and a new lockdown, the vaccine has given many in the U.K. measurable optimism that the pandemic is in its final stages. Science Teacher Bill Kenney is among one of those people. He said he considers the administrations of the first vaccine a “step in the right direction.”

With similar optimism, Wilkin  said she is assured knowing the pandemic could be “reaching a visible end,” although it still doesn’t mean that “we’re all going to be cured tomorrow.”

According to the BBC, per late stage trial data, the Pfizer vaccine is 95% effective. If this figure is replicated in the general population over time, the U.K. would be able to surpass the threshold that is necessary for herd immunity. Kenney said while this level of efficacy is plausible, it’s simply a question of the pace at which the U.K. can inoculate.

Vaccine rollout will happen in stages, prioritizing the most vulnerable along the way. Most students, provided they do not have underlying health conditions, will be among the last portion of the population to receive the vaccine, with teachers, on average, receiving it slightly before. Those under 50 years old are not included in the first phase of the program. Kenney said this means students will need to remain especially vigilant in keeping safe.

“You’re kind of taking care of the most vulnerable, so we have to be careful in Europe, probably adults more so than people your age,” he said.

Taking into account how much of the school population will receive doses later on, Kenney said he estimates life can return to normal as spring transitions to summer. However, in the interim period when the most vulnerable are receiving the vaccine, Kenney said the public must be cautious.

“Until we’re vaccinating the general population, we have to be careful,” he said. “For example, consider ASL, you’re kind of taking care of key workers, like NHS staff or people who are working in care homes, that’s not going to really significantly affect the rates of transmission for us.”

Wilkin said remaining diligent in adhering to restrictions is important. She said that the U.K. is very clearly not out of the water, even if the vaccine news is promising.

“The kind of interpretation that sometimes I even fall into is like, ‘Oh, the vaccine’s here, we can travel now,’” she said. “But at the end of the day, it’s still gonna take months and months ’til we actually get it and everybody gets vaccinated who needs it.”

Some have been struck by the rapidity of developing, testing and approving an effective vaccine for COVID-19. Kenney said back in March this is how far along he hoped the process would be, with the volume of resources and expertise backing the vaccine effort giving him such hope.

For the desired number of inoculations is to be attained, however, the public must be compliant. Yet, this may be the most significant barrier to the vaccine’s success; anti-vaccine sentiment surrounding the COVID-19 jab has been spreading.

According to a study conducted by King’s College London and Ipsos MORI, 34% of people in the U.K. say they have seen “anti-vaxxer” messaging discouraging them from receiving a COVID-19 vaccine.

Although he does not identify as an anti-vaxxer, De Giorgi said he doesn’t think he’ll be taking the vaccine. The grounds for suspicion vary, but De Giorgi particularly said he worries that developers cut corners during testing to push a COVID-19 vaccine through. Further, he said there is extensive governmental pressure on the process, as global leaders want to deal with the detriments of lockdown.

Kenney said despite these concerns, he trusts the healthcare professionals’ rigour and believes the vaccine is safe.

“They’re not gonna roll something out unless they think it’s safe,” he said. “I have confidence in the institutions that are assessing the data, certainly within the U.K. to roll that stuff out. You know, I mean, nothing is risk free, but, you know, I think the risk is going to be minimal.”

In reaction to anti-vaxxer sentiment, Kenney said he worries about the growth of what he sees as an “anti-science bias” in many western countries. In the context of a COVID-19 vaccine, he said this bias has the potential to undermine efforts toward mitigating the spread of the virus.

“If you don’t get people taking it up, then no, we’re not going to get herd immunity,” he said. “This is going to remain endemic in the population, which is, you know, could create longer problems down the road.”

Recognizing the extreme dangers COVID-19 has for vulnerable people, De Giorgi said he supports vaccinating these groups. Once these populations are protected, he said he is more comfortable in refusing the vaccine.

“I would feel a lot more comfortable with that than any other scenario, you know, just because I know that we aren’t as risk– we aren’t as much at risk as elderly people are.”

Wilkin said the aspects of pre-pandemic school life may slowly return if the vaccine proves successful, allowing restrictions to be lifted. In particular, she said she misses extracurricular activities, like sports, and the vaccine gives her reason to think they may start up again.