Harris triumphs over sexism in politics 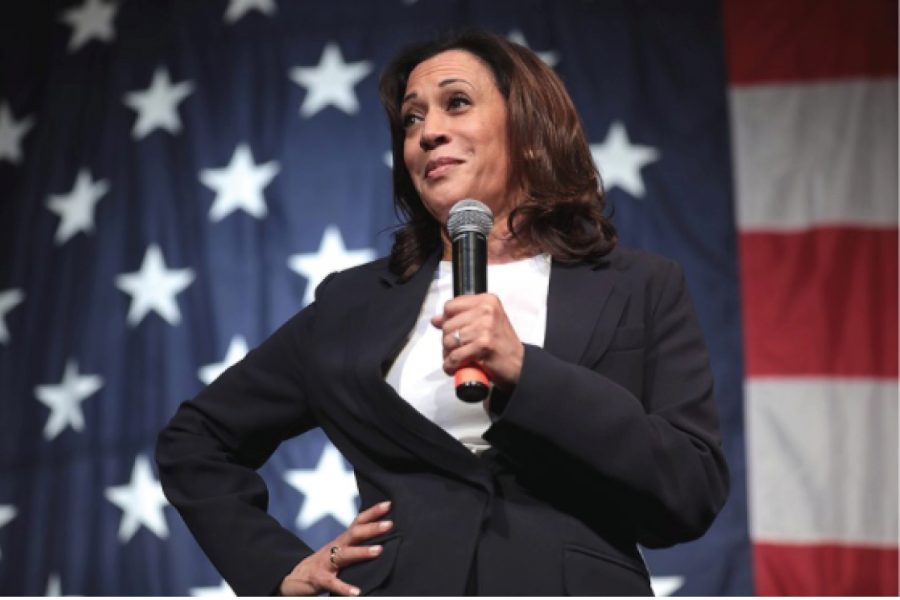 Vice President Kamala Harris speaking with attendees at the 2019 Iowa Democratic Wing Ding at Surf Ballroom in Clear Lake, Iowa. Harris has made history by becoming the first female, black and south Asian vice president in the U.S.

As the 2020 Presidential Election results were announced Nov. 7, President Joe Biden and Vice President Kamala Harris emerged as the next executive leaders of the U.S. Harris, who is the daughter of Indian and Jamaican immigrants, made history as both the first woman and first person of color to be elected Vice President.

As she said in her victory speech Nov. 7, anyone can break barriers in America, regardless of race or gender.

Just over 100 years after the ratification of the 19th amendment to the Constitution, which granted women the right to vote, Harris’ speech was emotional to watch for many women, like myself. To see a woman, especially a woman of color, as vice president in my lifetime is extraordinary and a symbol of how far society has come in providing more equal and inclusive opportunities. Harris’ election has brought relief and empowerment to women all over the globe.

However, Harris’ journey to the vice presidency involved facing numerous instances of sexism and racism throughout the election.

Since Biden announced her as his running mate Aug. 11, former President Donald Trump immediately deemed her “nasty” for her grilling of Brett Kavanaugh during his sexual assault hearings in 2018.

Trump has a disturbing history of branding female adversaries as “nasty” as he frequently labeled former Secretary of State Hillary Clinton throughout the 2016 Presidential Election. This election, the label was used against Harris to play into the offensive “angry black woman” stereotype.

According to a report published by “Times Up Now,” an organization that aims to fight gender-based discrimination, this racist and sexist trope was the most frequent stereotype in mainstream media coverage of Harris, standing at an astonishing 13% of critical coverage.

Women of color should be licensed to exist in their truth. Yet, U.S. politics don’t allow them to be their authentic selves without being stereotyped in a way that diminishes their abilities. This infuriating pigeonhole functions to simultaneously marginalize black women’s intelligence and respectability.

Within the same week of the announcement of Biden’s running mate, Trump re-ignited a false and racist “birther” conspiracy theory around Harris, claiming she was ineligible to be on the Democratic ticket because he claimed she wasn’t born in the U.S.

Even though constitutional lawyers and multiple fact-checkers have concluded that Harris is indeed a California-born U.S. Citizen, Trump repeated the baseless theory to capitalize on the traction it gained among his supporters when he wielded it against former President Barack Obama.

While both Obama and Harris quickly dismissed these allegations, the underlying bigotry and xenophobia stirred mass paranoia targeted at minority groups. Trump’s anti-immigrant rhetoric undermined the legitimacy of children of immigrants of color as Americans.

Furthermore, as the first woman of color to take the debate stage in a general election, it was unsurprising to witness Kamala Harris face double standards during the vice presidential debate Oct. 7.

Minority women in politics walk a delicate line between being assertive and confrontational. While women who react with passion are portrayed as overly emotional, men who behave in the same way are praised as confident or ambitious. As a woman of color, Harris had to additionally bypass the “angry black women” trope.

Aware of these racialized and gendered dynamics, Harris was reportedly advised by her team to avoid fact-checking former Vice President Mike Pence so she wouldn’t be stereotyped.

Each comeback was spoken with a wide smile, which female politicians have been told to do to remain warm and likable. Yet, during a post-debate interview with Fox Business, Trump labeled her “unlikeable.”

Harris’ frustration resonated with women everywhere and her iconic phrase immediately took Twitter by storm, with already 44,000 posts applauding it by the end of the 1.5 hour-long debate. In all walks of life, it’s a phrase many women often use or want to use when engaging with male colleagues. Her viral words spoke for all women who are tired of being interrupted by men.

Still, commentators on the political right scrutinized Harris’ demeanor, such as Fox News contributor Harlan Z. Hill, who tweeted Oct. 8 that Harris was a “lying b****”.

Despite Pence’s numerous lies and frequently interrupting his opponent, many commentators still perceived his performance as strong.

Although Kamala Harris was held to a double standard to her white male opponents, she came out of the election victorious, shattering glass ceilings for women around the world. She had to break several barriers to become the highest ranking woman ever elected in the U.S. government. Her presidency is an immense step forward in promoting ethnic diversity and her victory gives hope to women struggling to make a mark in politics.