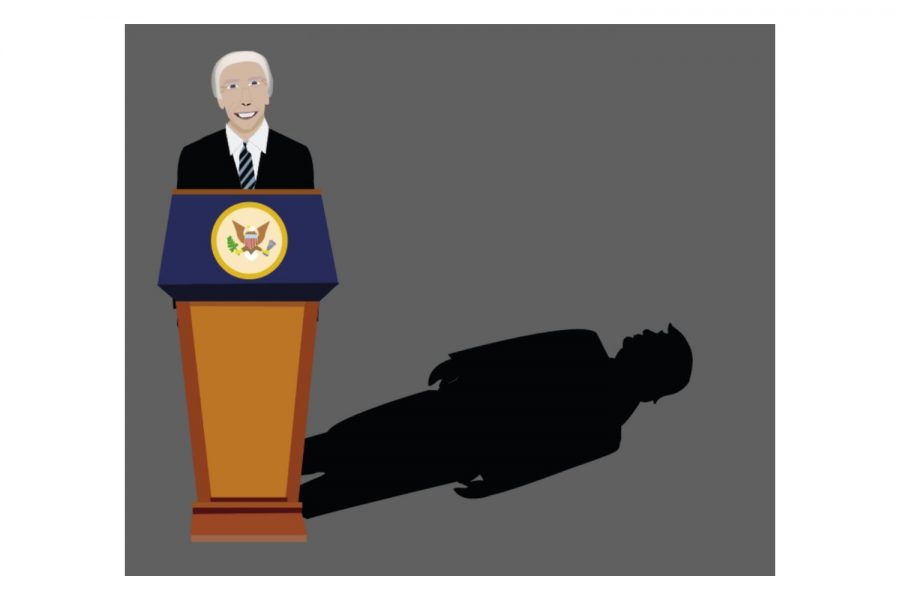 President Joe Biden was inaugurated Jan. 20. Despite the new presidency, Former President Donald Trump’s actions while in office have left lasting impacts on the government and America as a whole.

While President Joe Biden has been inaugurated as the 46th president of the United States, Former President Donald Trump’s legacy remains topical.

During his presidency, Trump worked to cut taxes on corporations and small businesses and bolstered a strong pre-pandemic economy. He also softened relations with Israel and Saudi Arabia, and worked to appoint conservative justices on the Supreme court.

However, Trump received criticism for the way he dealt with many national and international issues such as climate change, handling relations with Iran, and leading an administration that was plagued with scandal. His leadership ultimately led to two sets of impeachment charges, a first in history for one president.

Former President Barack Obama and Trump both utilized social media to communicate with their base of voters. However, they did so in different ways. According to a Stanford University article, Obama’s use of social media during his 2008 campaign was able to help him gain 5 million supporters across 15 different social networks.

Similarly to Obama, Trump also used social media as a place for gathering supporters. AJ Laurienti (’21) said a large part of Trump’s legacy will be his bold use of social media, specifically Twitter.

“It definitely sets him apart for some people in a good way, but I think in terms of actually promoting stability and promoting good policy, it’s a terrible thing,” he said.

Like Laurienti, Assistant Principal Natalie Jaworski said Trump’s social media personality will influence how he is viewed as a former president.

“It’s certainly part of his story,” she said. “Him being banned from different platforms has implications surrounding him as a person.”

“I don’t think there has been a U.S. president who is to use Twitter, for example, as prolifically as he has,” he said.

“Twitter shouldn’t be the platform that you’re using to govern,” he said. “If you want to address your people, do an address on TV, not in all caps late at night.”

One aspect that set Trump apart from other candidates in 2016 was the fact that he wasn’t a politician. Rather, he was a businessman.

“Him coming from a different perspective did appeal to the majority of his voters,” he said.

However, Ganeshananthan said background in business will not necessarily be what he is remembered for.

“Plenty of presidents have had a background in business and other jobs, so I don’t really agree that it will be a big part of his long-term legacy,” he said.

While Jaworski said aspects of Trump’s approach to speaking and reaching American people may be emulated in the future, she hopes it comes from someone with more political experience and tact.

“The thing that I’m going to be looking for as a historian and as an American citizen is for the next person who uses the same rhetoric in the same platform,” she said.

Jaworski also said Trump laid the groundwork for more structural political change to take place in the future, such as a rise in populism.

“Trump was never a politician, but he tapped into these age old ideas of populism,” she said. “If you have someone who’s also a savvy politician using [his] same strategies that is where deeper and more long-lasting change and legacy will happen.”

Laurienti said while he sees most of Trump’s term as negative, there were a few positive moments.

“He’s called many of our troops back from Afghanistan, and I think that is something that both Democrats and Republicans agree on, that we don’t need all of our troops in the Middle East,” he said.

Similarly, Grade 10 Dean Duncan Pringle said parts of Trump’s administration were positive, mainly because of the performance of the economy and stock market. He said the Dow Jones, a general indicator of how well the stock market and overall economy is doing, proves that Trump has improved the economy as it hit a record high on Jan 7.

However, Pringle said Trump’s ability to encourage Americans who hadn’t previously voted is the most positive outcome of his presidency.

“Trump has actually enfranchised a fairly large group of people who previously have been disenfranchised in politics and may have felt like they’ve been excluded,” he said. “Trump really has, in a sense, charged up American politics.”

Indeed, the voter turnout in the 2016 and 2020 elections have been the highest to date. According to BBC News, in the latter of the two elections, Trump received the 70 million votes – the second most votes in history with Biden, who received 74 million votes, holding first place.

Similarly, Jaworski said the total amount of votes in the most recent election does show positive progress for America’s government.

“The most positive thing that has happened is that people care about the government, that we have been awakened from our apathy of saying, ‘It doesn’t matter who you vote for,’” she said.

While Trump has created some positive impacts in the U.S., there is debate around whether the good outweighs the bad. Policy-wise, Pringle said Trump’s lack of environmental awareness could potentially be irreversible.

“I would suggest that Mother Earth is taking a deep breath right now and is thankful for the fact that Trump is no longer president,” he said.

As an environmentalist, Jaworski said Trump’s policies have been objectively worse for climate efforts.

“His policies have set back any progress at all that we’ve had towards helping the climate crisis,” she said.

In addition, Laurienti said one of the most detrimental impacts of Trump’s presidency was the political division he instigated in the U.S.

“This Trumpist populism that he created under his philosophy, that’s very Islamophobic and isolationist and is likely to to be seen in future generations of Republicans,” he said. “I hope it doesn’t carry over, but Biden’s won and we’re not seeing any real social change right now, so sadly maybe it’s going to carry into, like, the future generations.”

Ganeshananthan said Biden’s small margin of victory is a testament to how divided America currently is.

In addition, Jaworski said Trump’s term caused new implications for what it means to be a Republican. She said the “true fractures in the Republican Party” started to become clear throughout his term between Trump supporters and more moderate Republicans.

“I wonder if this will be a real wake-up call for the Republican Party about what it is they truly believe in,” she said.

Laurienti said this divide between government parties is a bad sign for the future of the U.S. both socially and politically.

“We’re in such a polarized state right now,” he said. “He’s completely split everyone. Either you have to be radical left which isn’t necessarily a good solution, or you have to be like racist and like super isolationist.”

Laurienti also said he hopes, in addition to their policies, people will take a closer look at candidates’ personalities in the future.

“I hope that if someone as terrible as Trump ran as a Democrat and had similar views to mine that I still wouldn’t support them,” he said.

Assistant Principal Natalie Jaworski said one of the most important powers of a president is appointing justices to the Supreme Court, and Trump’s appointees will likely be a big part of what he is remembered for.

Similarly, Pringle said no president has appointed more Justices on the court than Trump who elected three during his term in office.

“He managed to drive through loads of judicial appointments,” he said. “So the judicial branch has taken a big lurch to the right and they’re going to be there for decades probably.”

Pringle said that he “wholeheartedly believes that Trump will run again in 2024,” and if not him, then people with the same ideals and beliefs.

Names such as Tucker Carlson, an anchor for Fox News, have been speculated as a potential Republican candidate in 2024 according to The Independent.

Pringle said while no one will ever match Trump’s personality in full, it’s likely that future Republicans will copy certain parts.

“There are aspects of him, the language he speaks in and the way in which he communicates that is likely to be repeated in the future,” he said.

However, Ganeshananthan said it’s doubtful that Republicans would aim to create the same atmosphere or behavior as Trump.

“I can’t necessarily see future people in the Republican party emulating Trump as he doesn’t follow the ideals and uphold the beliefs like they wanted him to,” he said.

While Laurienti said that he doesn’t want any future president to mimic Trump’s actions and policies, he also said that it is important for people to remember Trump as a lesson in how divided and immoral America became until his leadership.

“I just hope that we use it as a baseline for something that we should not do going forward, and a reminder that we do sometimes get further away from general decency than we should,” he said.

Ganeshananthan said that Trump’s time in office is over, and his legacy will be quickly forgotten. He said with Trump’s short time in office that “many have posited that he is likely to fade away.”

Overall, Ganeshananthan said it’s “far too early” to be able to highlight individual long-term legacies that Trump will leave.

Ultimately, Jaworski said Trump’s term stands out in both U.S. and world history.

“As a whole, 2020 is a pivotal year in world history,” she said. “Trump’s term has definitely contributed to creating this turning point.”