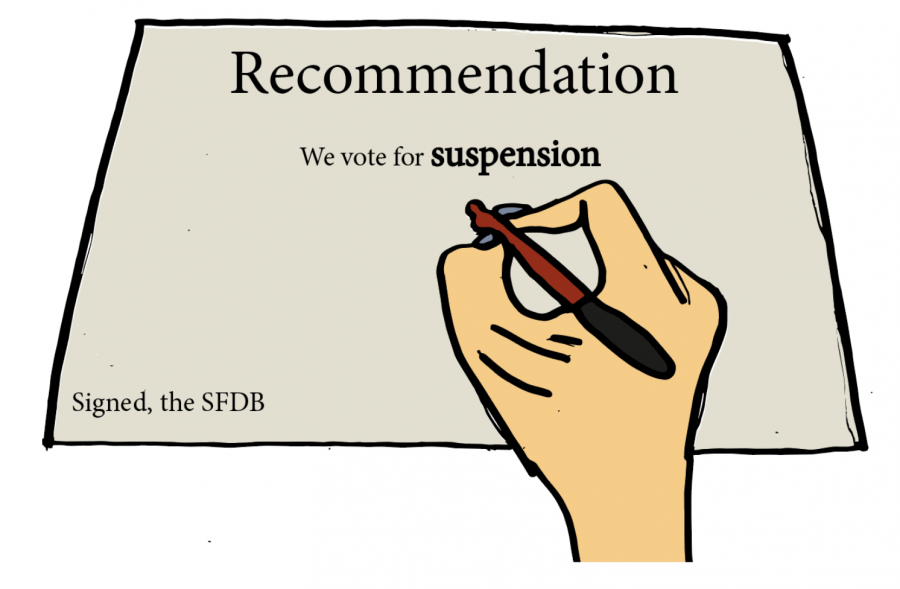 A member of the Student Faculty Disciplinary Board (SFDB) gives the administration their decided punishment for a severe infraction. The SFDB was created to host hearings for students found guilty of violating the ASL Code of Conduct and recommend their idea of an appropriate punishment to the administration.

If the acronym SFDB (Student Faculty Disciplinary Board) was to pop up in a conversation among a group of high school students, there would likely be a broad range of reactions.

And as someone who has been in high school for almost four years, I can surely say that not many would appear to be particularly ecstatic.

The SFDB is an elected group of high schoolers that hosts hearings for the students found guilty of breaking the ASL Code of Conduct. While the group is unable to make any final decisions, the SFDB informs the administration of their idea of an appropriate punishment. From there, the principal, with input from other members of the administration, can choose whether or not to accept the SFDB’s recommendation.

At a glance, the intent behind a group such as the SFDB is sensible: it allows for multiple student voices to be considered in the process of determining a punishment for a disciplinary infraction, especially one that may potentially carry a considerable effect on a student’s future. Thus, it can be argued that the SFDB helps the administration ensure that the decided punishment is reasonable and thought-through.

However, though the group has the potential to provide the administration with a valuable perspective, the SFDB upends power dynamics and challenges connections among the student body.

From personal experience, I can recount numerous instances of how my subconscious bias towards members of the SFDB guided my behavior in social settings. Up until a year ago, I felt as though anything I did could be used against me by the SFDB, pushing me to silence myself. Inevitably, any hopes of building trusting connections and relationships were crushed.

Over the years, as I got to know members of the SFDB more closely, I learned that the  bias I held towards them was greatly undue. Nonetheless, my previously-held beliefs can still be indicative of a greater problem: other students who do not have the same level of trust built over the years with the members of the SFDB may succumb to these similar preconceptions.

In addition, one of the foundational problems of the SFDB is the chance of unwarranted judgements playing into the decision-making process, despite the numerous steps the SFDB takes to avoid them.

To comprehend the complexity of the issue, consider the one main distinction between the viewpoints of the students and administration while deciding punishments. Unlike the administration, the students are “in the know.” In other words, students interact with one another much more closely than they do with teachers and faculty.

Therefore, in one way, the SFDB does better represent the student perspective on the issue at hand. However, it should also be understood that small and sheltered communities such as ASL, judgements and rumors can fly around easily. Consequently, students form opinions on their peers prematurely. Negative interactions in the past, preconceived biases or even gossip can inadvertently play into the SFDB’s decision of a punishment.

On the other hand, the resolve of the administration is much more likely to be formed based on hard-cold truth and facts, simply because they do not have the same level of knowledge on students.

Therefore, the high risk of bias playing into the decision can be particularly problematic. And although the SFDB does not directly determine the outcome of a person’s disciplinary infraction, their decision can hold a certain level of power. After all, if it didn’t, why would the SFDB exist in the first place?

In addition, I disagree with the simple notion of having students check and judge the behavior of their classmates. Though the SFDB was created as a group to advocate for students, it nonetheless resembles a formal court system. The very idea of “going up in front of the SFDB” for hearings illustrates the completely disbalanced power-dynamic – something which simply should not occur in a learning environment.

Do not get me wrong: I am all for student involvement in school affairs and decisions, and I am beyond grateful for the multitude of opportunities that students are provided to share their opinions with the school. However, the functional purpose of the SFDB varies dramatically from other notable high school clubs and groups.

For instance, unlike the Student Council or the Social Justice Council, which emphasize bonding or educating the community about significant issues, the SFDB’s main purpose is enrooted in choosing punishments, which, in the first place, should be left entirely to the administration.

Thus, despite potentially providing the administration with a completely new perspective on the issue at hand, the SFDB contributes to a pre-existing rift among the community: in an already academically competitive and college-driven environment, students also are part of a system that forces them to inspect, check and investigate their peers.

What we need is more organizations and student groups that help tie the community closer together, especially during challenging times. Thus, in order to create a supportive, collaborative and safe learning environment, the SFDB needs to go.