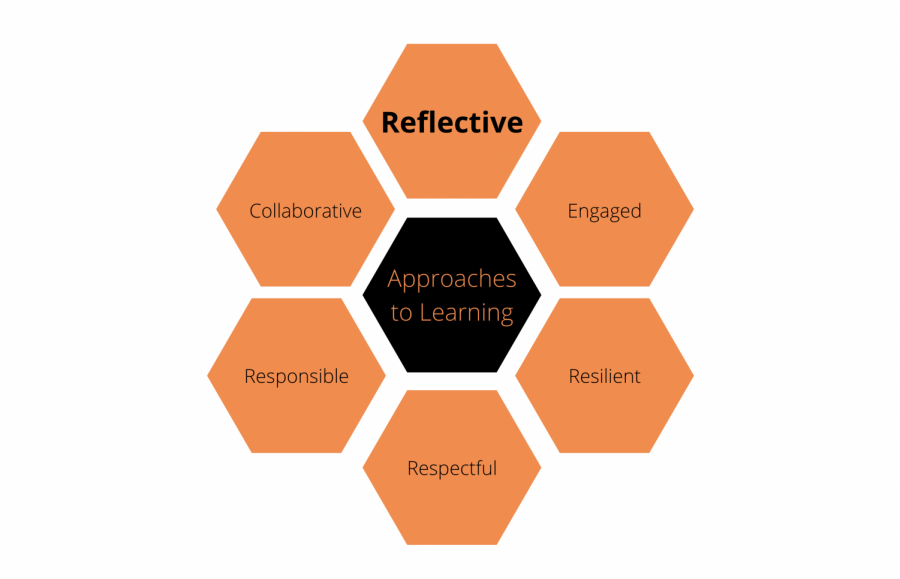 “Reflective” is the fourth goal on the Approaches to Learning list, in which students strive to value mistakes as learning opportunities, reflect on their own learning and set and pursue goals for improvement. Now, students and faculty evaluate the self-reflection work within the High School to see the impact it has on student learning.

The start of a new year is often considered a time for self-reflection, full of resolutions and new beginnings. Students and faculty consider the self-reflection work taking place within the High School, as well as what they think could be improved, to see if it, too, needs a New Year’s resolution.

Thompson also said the purpose of self-reflection is to promote development as learners.

“It’s like acknowledging that you have problem areas,” she said. “For me in precalc last year, I was very bad about doing my work. And so, my precalc teacher made me sit down and sort myself out and make a schedule.”

Furthermore, ElSaddic Abd Saddic (’23) said mistakes do not have to be viewed as demotivating. Instead, he said the ability to self-reflect and grow is beneficial.

“It’s not necessarily a negative thing because seeing it shows you that you have to improve, and I feel like that’s always a good thing,” he said.

Math Teacher Frank Sousa said self-reflection can be applied to any aspect of a person’s life, and he said it allows for analysis regarding one’s strengths and weaknesses.

“Whether it’s academic learning or whether it’s learning personally, it’s not just reflecting on what might have not been right,” he said. “For example, in math, if you do a problem and you do it well, you might want to reflect on why you did it well because then you can apply that knowledge to something else.”

In addition, Abd Saddic said if a learner is more prone to self-reflecting, then it will come naturally and be easier to benefit from. But, in the end, he said it comes down to the individual.

“It is genuinely helpful, at least to me,” he said. “It just depends on the student. If you’re a student who enjoys reflecting then you’ll essentially do it after every test.”

On the other hand, some students, like Saahil Sinha (’22), said they struggle to understand why self-reflection is required or what its purpose is at ASL.

“I don’t even know why ASL enforces it, but they just have it there,” Sinha said. “It’s just an ASL thing, like they need to do it.”

Destin said she does not always directly notice the effect self-reflection has on her schoolwork, but more so how it improves her mental health.

“I’m not sure if it impacts my learning, but I do think it’s usually after a test that teachers are like, ‘How are you feeling?’ and the class will chat about it,” she said. “It’s a good stress reliever for me after tests, I think, rather than just jumping straight into new material.”

Self-reflection data by Eden Leavey
Another common form of self-reflection at ASL are the Approaches to Learning, through which students are assessed on six developmental goals: collaborative, respectful, responsible, reflective, engaged and resilient. These six areas are evaluated through the rankings “consistently, often and rarely.”

Even so, Sinha said there may be a way to structure self-reflection work, particularly the ATLs, in a less repetitive manner.

“It’s not all bad, it’s just the time waste,” he said. “When you have to do it in different classes, I’m not going to change my answer for each class. I’m not gonna put ‘rarely’ for one class and then ‘consistently’ for another class. I just have the same answers for everything, so I think it’s pointless.”

Likewise, Destin said the amount of time she spends reflecting on the ATLs is not always helpful, and she said she appreciated that only two of her teachers in the first semester required her to fill out an ATL survey.

“I don’t find ATL reflections super useful,” she said. “I usually end up being on the same page as my teachers anyways. There are way too many surveys, like in general.”

Sousa said there are times for teaching the material and other times for self-improvement, but regardless, the coursework should be the priority.

“As with anything, we have to find the right balance, and I think maybe just doing reflection every now and then on something is better than having to do it all the time,” he said. “We only have so much time and we have to learn the content, but we also want to become better people.”

In addition, Sousa said he worries if written reflections become overdone that they will begin to lose their meaning.

“If you’re constantly doing formal reflections, then people start to just kind of go through the motions,” he said. “‘This is what the teacher wants to hear, so that’s what I’m going to write down.’”

Destin said short in-class discussions are the most beneficial way for her to debrief what she learns, but she said she acknowledges that it is “less organized, and it’s not self-reflection, it’s class reflection.”

Sinha said creating one survey that encompasses all classes as opposed to having a separate one for each class might be more effective for everyone.

Thompson also said one ATL reflection per student as opposed to per class might be a good idea to look into. She said that in the end, the main goal is helping students continue to grow.

“There’s no need if it’s not beneficial for the students,” she said.

Furthermore, Destin said all of her self-reflections were given at the end of the first semester, at which point it was too late to change anything before report cards came out.

“You’re not going to be able to improve or change things before the semester ends,” she said. “If it is really about self-reflection and improving yourself, then it would make more sense at quarter one.”

Abd Saddic said he realizes students might not all find the same method of reflection to be helpful, and he said advisors could talk to their students to figure out the best way for each of them.

“It should be based on student preference, rather than something that’s mandated throughout all of high school,” he said.

Similarly, Thompson said she incorporates a variety of methods in her classes to allow students to explore what works well for them, as well as establish the ones that don’t. She also said she views self-reflection as a tool for her students to grow and process emotions.

Sinha said a few of his teachers understand the frustration he feels toward the countless surveys and thus try to find more interesting ways to assess self-reflections.

Still, while generic questions may not improve an understanding of self, Thompson said there are ways for it to be impactful on students’ learning through more open-ended responses.

“A tick box isn’t a beneficial use of time,” she said. “If it’s personalized, then it can be very powerful.”

In addition, Abd Saddic said many teachers are supportive when a student makes a mistake on a test or essay and are willing to work with them individually to prevent any similar issues in the future.

“They’re quite helpful with scheduling times, organizing, doing whatever they need to do to get you to become the best version of yourself,” he said.

Sousa said he provides an opportunity for his students to show improvement between quizzes and the final summative test of each unit, that way they can continue to grow.

Nonetheless, Abd Saddic said some teacher feedback isn’t particularly helpful, or that there is a lack of it, which leads to confusion about how he can develop his skills more.

“There are some times where you’ll be told what you got and that’s almost it,” he said. “That’s the most frustrating because then you have to figure out what you have to do on your own.”