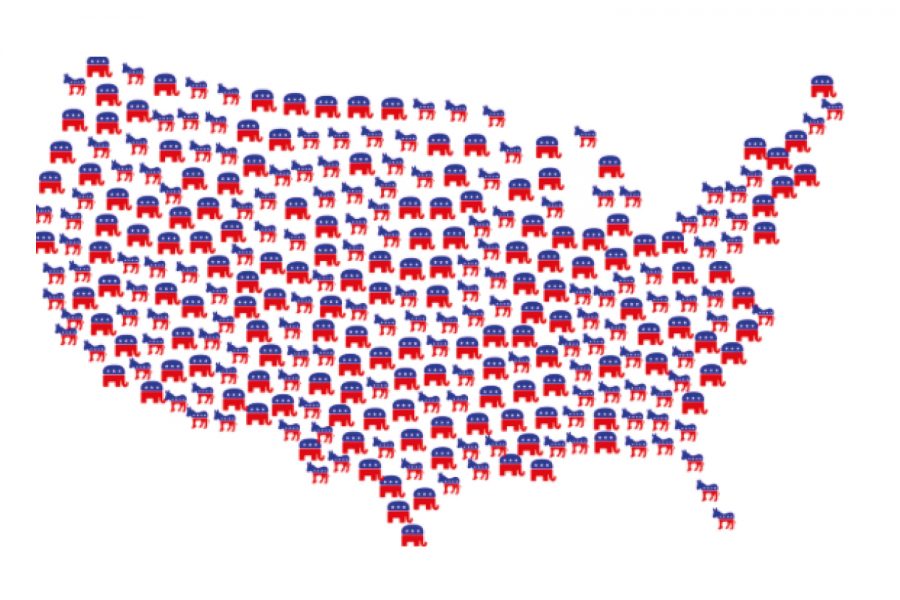 In U.S. presidential elections, the Electoral College, composed of electors from each state, decides who becomes president. Voters in each state will vote for president, and each state awards its electoral votes to the winning candidate. However, this system is flawed and can lead to disenfranchisement, as seen in the map above of the 2016 election.

The multitude of global issues that have put the world in distress, paired with the U.S.’s international influence, means that countless lives were at stake in the 2020 presidential election. Every U.S. presidential election should be a celebration of democracy. However, this one opened my eyes to the voting injustices in the U.S.

In a U.S. presidential election., each state is given a certain number of electoral votes based on the number of congressional districts they have, plus two for the state’s Senate seats. Every state, except for Maine and Nebraska, gives all of their electoral votes to whichever candidate won the majority of votes in their state. There are a total of 538 electoral votes, thus presidential candidates need at least 270 of them to be elected.

Despite the longstanding system, this process creates two fundamental issues with voting in the U.S. Firstly, the Electoral College voting method leads to a winner-takes-all system.

For instance, in the 2016 election, former President Donald Trump beat former Secretary of State Hillary Clinton in Florida by a mere 2.2 percentage points, yet he claimed all 29 of the state’s electoral votes. These diminutive margins meant that Trump won the election because he barely edged out victories in key swing states.

This winner-takes-all system means that it doesn’t matter whether a candidate wins a state by millions of votes or by a couple; they are going to win all of the electoral votes either way. According to the National Public Radio, a presidential candidate can thereby win the election with a mere 23% of the popular vote.

The second significant issue with the electoral system is the unequal distribution of votes among states.

Just after the birth of the country, the U.S.’s founding fathers ran into a conflict between big states and small states. Bigger states wanted presidential elections to be determined by the popular vote. However, smaller states took issue with this democratic method as it might’ve meant that presidential candidates would focus their energy on states with the largest populations.

The Electoral College was seen as a compromise because it theoretically assigns votes depending on the population of each state.

However, each state is given three votes by default, meaning votes which are meant to go towards larger states end up being given to smaller states. States with larger populations, such as California and Texas, are underrepresented in the election as the ratio of their population to electoral votes is much lower than smaller states.

According to The Guardian, each electoral vote in California represents over three times as many people as one in Wyoming. In 2016, Trump won 96 of his electoral votes from 22 states, their populations adding to 37.8 million people. However, California has a population of 39.5 million, yet it only has 55 electoral votes.

Not only does this fact display an unequal distribution of votes, it also reflects the underrepresentation of minorities in the American voting system. According to Vox, white people have 16 percent more voting power than black people and 28 percent more than Latino people, once the Electoral College’s dispersion of votes is considered.

The math demonstrates that the voting system in the U.S. is indeed flawed. Both the winner-takes-all nature and the unequal distribution of votes are an infringement on democracy.

These unevenly allocated votes have a severe impact on the nature of political parties in the U.S. Currently, the electoral voting bias is leaning more towards the Republican side because of the way that Republican votes are distributed across the country. This is seen in the 2016 election when Trump won with fewer total votes, and in the 2000 election, when Bush won with 500 thousand votes fewer than former Vice President Al Gore.

No matter which side of the political scale the electoral system leans, the clear injustice of this system is going against U.S. citizens’ right to a fair and just election. However, rather than abiding by this inequitable system, there are alternative solutions that can be implemented.

The first alternative voting system which is already partially implemented in some states is a different approach to assigning electoral votes. As mentioned before, Maine and Nebraska separate their votes. They both give two of their electoral votes depending on the state popular vote. Nebraska has three congressional districts that vote independently from the rest of the state that each gives its one electoral vote depending on the votes in the district. Maine has two such congressional districts.

This begs the question: why don’t we simply re-assign the electoral votes in each state according to their population? Although this seems like a simple solution, the current political atmosphere would not allow for it. Since Republicans have the advantage in the election, nearly half of the country politically benefits from the Electoral College, making it almost impossible to alter the current voting system.

Ultimately, it is clear that the fundamental flaws in the electoral system have a tremendous impact on the state of democracy in the U.S. Coupled with the drastic polarization of politics in the U.S., the country’s democracy is in a vulnerable state. However, should reforms be implemented and the system becomes fairer, it will go a long way to advancing American democracy.