Anti-Semitism needs to be confronted 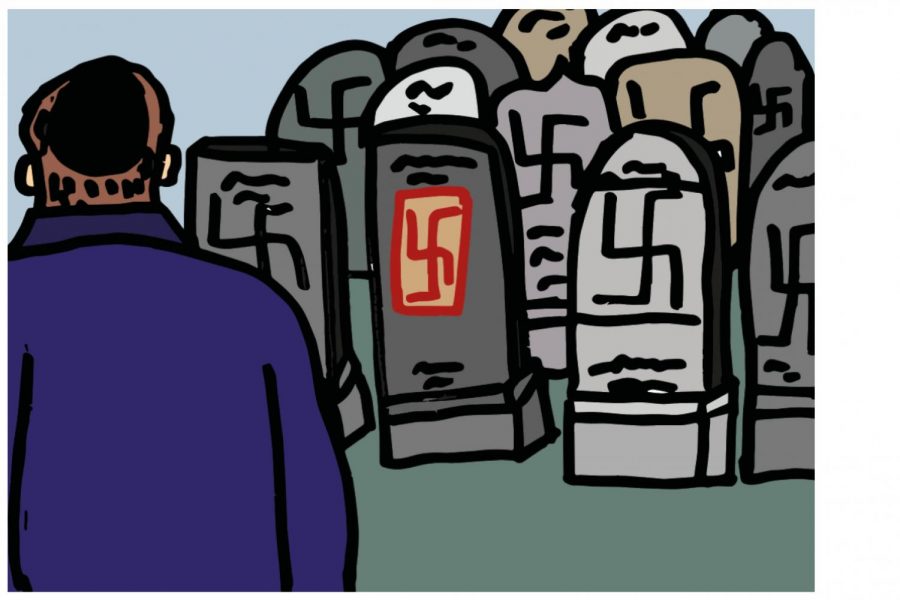 Over the past couple of years, there has been a sharp rise in anti-Semitic incidents in the U.K., as well as across the globe. We need to stop continuously neglecting the systemic discrimination and become better allies to the Jewish community.

I can still recall my reaction to the news. It seems as though it was almost a few days ago that I was comfortably seated in my chair with a cup of coffee in my hand, scrolling through my newsfeed in between my Zoom classes.

Although I have build up my tolerance to the constant influx of disheartening news over the past year, one headline still caught me by surprise: “Jewish cemetery near Auschwitz vandalized with Nazi symbols”.  My jaw dropped. It was only 11 days into 2021 and anti-Semitism had already seeped in.

A few weeks later, the Holocaust memorial day took place Jan. 27. It is the single day of the year dedicated to honoring the 6 million Jews along with other marginilized groups, who died at the hands of the fascist Nazi regime.

What I thought would be a time to take part in discussions on systemic discrimination unfortunately turned out to be just like any other day.

Very few of my non-Jewish peers took the time to remember the Holocaust or reflect on the current prevalence of anti-Semitism. However, I still vividly remember the vigor with which so many of them advocated for the more popular or trending issues just a few months ago.

Allyship towards the Jewish community remains scarce, and the consequences of society’s continuous disregard of anti-Semitism are finally catching up to us.

According to Statista, in 2019 there was an all-time high of 1,805 reported anti-Semitic cases in the U.K., an appreciable jump from the 546 cases in 2008. Similarly, that same year in the U.S., the number of anti-Semitic incidents also hit a record high.

The EU’s Union Agency for Fundamental Rights’ 2018 report discovered that out of the 16,395 people who identify as Jewish across 12 EU states, 89% answered that anti-Semitism had increased in the countries where they lived, with 40% stating that they feared a physical act of violence.

It is evident that despite the massive surge in anti-Semitism in the U.K. as well as across the globe, we continue to dismiss it as a trifling issue. Unless we act now, the discriminatory behavior will only rise from here.

Consider the number of times you have witnessed anti-Semitism. The constant prejudiced remarks and actions of the Labour Party, especially under member of U.K. Parliament Jeremy Corbyn’s lead, constantly fall on deaf ears. Or, for instance, the anti-Semetic jokes tend to fly around quite frequently among acquaintances and friends in social settings.

In addition, examine the fact that it is almost impossible to ignore a Nazi swastika drawn in a public toilet or behind the seat in some form of public transportation.

A significant part of the problem is that we all have grown so desensitized to anti-Semitism; now, we merely accept it as the unchangeable reality of our day-to-day lives. Since we are so often predisposed to anti-Semetic incidents today, we are much less likely to be surprised and bothered by them.

In addition, as a result of the eventful year of 2020, the public’s attention has been further diverted from hate-driven crimes towards Jews. In no way, however, does it mean that they suddenly stopped. Rather, it is quite the opposite.

For instance, in January, a swastika was drawn on the back of the head of a 65-year-old man with Alzheimer’s and Parkinson’s disease in a Toronto care facility. This same month, in the U.K., a 13-year-old boy was punched in the stomach in an anti-Semitic attack on a London bus. And in May, an Australian golf course owned by a Jewish family was vandalized with swastikas.

In July 2020, fast fashion brand Shein uploaded a Swastika necklace on their website. Quickly, Shein removed the necklace from their website and justified their actions by stating that it was a Buddhist Swastika, a symbol of spirituality and calmness.

However, given the recent historical context of the Holocaust and the oppressive Nazi regime, there can be no justification. Putting such an item up for sale is simply flagrant and unnecessary.

The crux of the issue, however, is that not as many of my friends seemed to pay attention to such incidents; the public outcry was neither as intense nor wide-spread as I would have hoped.

So how many more cases will it take before we start speaking up?

If we follow this trajectory of ignoring the prejudice towards Jewish communities, then we are bound to end up in a society where hate-based crimes are an even more regular occurrence than they are right now. Many of us have Jewish friends, school mates and work acquaintances, and if we don’t start standing up and speaking out, all of us are bound to become accomplices in such discrimination.

In fact, this is exactly what occurred in the 1940’s in Europe. The Holocaust did not take place overnight. Instead, it was a direct corollary of countless years of oppression during which no one dared to raise their voice.

Ultimately, there is no easy cure to overcoming anti-Semitism, along with other forms of discrimination. However, whatever issues we have at hand are only being aggravated by our disregard, coupled with a collective hesitancy to speak up.

If equality is our goal, then we do not have the privilege of picking and choosing which issues to advocate for. At the end of the day, we cannot advance any equality agenda until all marginalized groups are justly represented and supported, both online and in real life.

Thus, we need to open up our minds and hearts to learn how we can become better allies to the Jewish community in the fight against anti-Semitism.