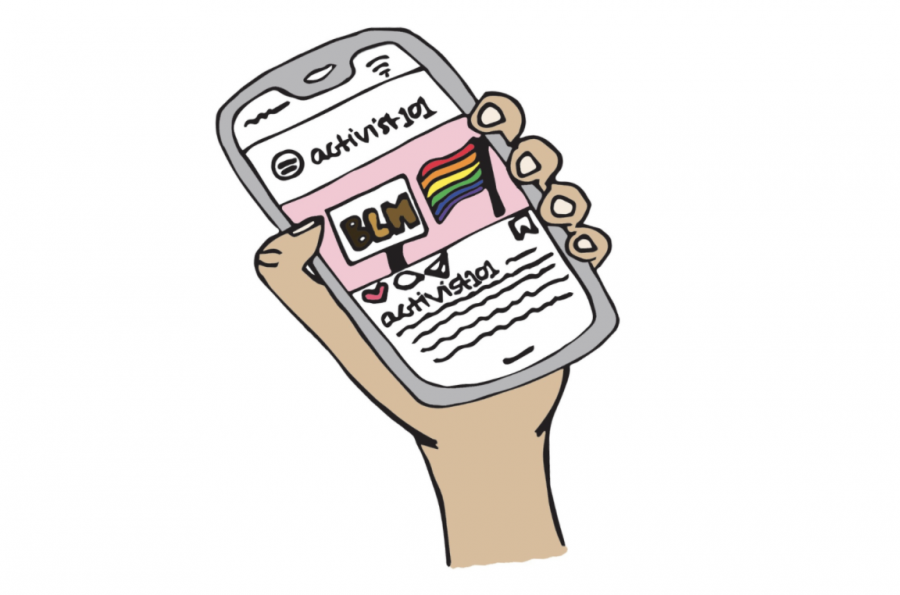 The conversation around social media activism, and how to tell the difference between genuine and performative posting, continues to grow. Out of it also comes a call to action to educate oneself and others as well as look beyond the screen.

When picturing an activist, what comes to mind? Posts, stories, comments, direct messages? These are some of the basic features of Instagram, Snapchat, Twitter and TikTok – social media platforms which are being utilized for far more than friend-to-friend communication.

Multiple students in the High School run accounts for school-affiliated clubs to educate the community on current events and issues they care about. And many more read, repost and interact with similar content on their personal accounts.

Social Justice Council Co-President Zarina Choudhari-Stewart (’21) said she, Co-President Olivia Benjamin-MacDonald (’21) and Media Director Mona Marouf (’21) post on and monitor their Instagram account, and they respond to feedback together.

Choudhari-Stewart said the majority of their posts, which aim to spread awareness on injustice, receive a few positive comments from interested students, who are part of their primary follower base. Although, she said they do receive DMs which challenge the content they have been sharing.

“They’re not even negative comments, they’re just like, ‘Let’s have a conversation,’” she said. “And we can kind of figure out like, ‘Okay, how can we explain our side while they explain their side and kind of come to more of an understanding?’ even if that’s not possible all the time.”

Eva Noel (’21) said she often has conversations through DM, which usually begin as responses to her stories and can lead arguments.

Noel said one notable exchange occurred when a classmate replied to her repost of an edited image of Supreme Court Justice Amy Coney Barrett holding a copy of “The Handmaid’s Tale” by Margaret Atwood – implying Barrett’s consevative views on topics such as abortion mirror those expressed in the society of the novel.

“I got into this argument with someone in my grade about abortion,” she said. “It was coming from a male perspective who was arguing anti-abortion, and I was that arguing pro-abortion. And it was just like a really, really big discussion because it’s like two completely different perspectives.”

In addition, Noel said she occasionally posts on her Instagram account to share information on topics she wants others to learn about. But most frequently, she said she reads news reported by accounts with large followings and views her friends’ stories.

Max Olsher (’21), who helps run the Gender Sexuality Alliance and Neurodiversity ASL Instagram accounts, makes posts of their own. They said they first do background research, then put together text and images using the application Canva.

One series they said they’ve been working on for the Neurodiversity ASL Club is Famous Person Friday, showcasing people in high profile positions who are breaking expectations of what neurodiverse people can achieve.

However, Olsher said there is not much engagement from the student body they have to moderate.

“It’s not very often that we get contacted really,” they said. “People don’t feel comfortable at school responding to those kinds of accounts because unless you know the people that are running it, you wouldn’t.”

While Olsher said they have needed to take a break from working on both accounts recently to finish university applications, they also use their private account to communicate what they care about, using stories and DMs for discussions.

Noel said there is a tendency for people, especially on social media, to seek out information that they already agree with, and she said algorithms then directly reinforce these patterns.

“You’re never reading what you don’t want to hear, so you never have that other perspective,” she said. “You just, like, continue to think that your ideas are correct, which I guess, it just creates more divide and more tension.”

Despite the possibility of creating a one-sided feed, Noel said companies will continue to use these algorithms because “our world is a capitalist world,” and social media companies can earn more money for themselves as businesses, and in turn for governments.

“At the end of the day, you know, we can’t change the algorithms of the apps and the platforms that we use every day,” she said. “It more has to be like government control, and these companies have to be regulated.”

As for other regulations, Olsher said terms of use on social media apps do not directly prohibit what users can post about.

“There isn’t an enormous amount of policing done on social media currently because of laws allowing them not to be legally liable for what’s posted on them,” they said.

Choudhari-Stewart said there are benefits to having “quick access communication,” but a drawback is the potential to be told incorrect information. She also said everyone must come to their own conclusions about what they believe since nobody has the same exact views in terms of activism.

“When absorbing different information and like understanding different people’s perspectives, it’s kind of tricky to figure out like, ‘Is this just me personally believing this? Or is this like an evidence backed idea?’” she said.

Moreover, Olsher said social media can be utilized by anyone to advocate for initiatives and messages they believe in.

“If you can get your message across, so can everyone else,” they said. “That means that as fast as you can spread a message of hope or a protest organization, people can spread information that’s directly hateful, or that also like contradicts directly what you’re trying to do.”

At the same time, Olsher said there are opportunities for people to show support for many groups of people, such as the LGBTQ+ community, which Olsher is a part of.

“When I see people posting about that, it makes me happy and makes me feel uplifted and cared about as a member of that community because it’s at a point where it doesn’t happen very often, so I kind of don’t expect it,” they said.

Olsher said they think some users advocate for change because it looks good to them.

“That kind of further perpetuates the idea that social activism, which is fighting for the rights for people, the very livelihoods of enormous groups of people, is a cool little aesthetic you can put on your Instagram account over the summer,” they said.

Noel said she has noticed a decrease in people posting about certain topics, specifically the Black Lives Matter movement, since the summer.

“For the Black community, it was just a huge surge in this support, which was amazing to witness,” she said. “Obviously, those injustices are still happening all the time, which is horrible, and it shouldn’t just be forgotten about.”

However, Noel said she is also posting less as the wave of support from earlier in the year continues to flatten.

“I’m so ashamed to admit to that, but I do think it kind of goes down, which is bad,” she said. “But recently, I have been like making myself, you know, just still stay on top of it because I do think it’s important to not just let these things go like a trend.”

Choudhari-Stewart said that although posting on social media and using online resources is beneficial, it is only a ”stepping stone” to what people choose to do in their daily lives. She said people must question how they will implement their online words or not.

“‘How are you employing anti-racism into your daily lives?’” she said. “What have you learned from those Instagram posts? Like, are you going to stop saying the N-word? Are you going to take an active role to stand up if you see something? Are you going to engage in conversations with people that like might seem difficult in the first place?”

To differentiate those who post online for aesthetic purposes, Olsher said it is important to observe a person’s behavior in real life. They said it becomes evident when people “don’t educate themselves, they don’t act” on what they’re saying that they are not serious in their activism.

On the other hand, Olsher said those who want to learn about different topics will be “willing to engage in conversations and either be corrected or make mistakes.”

In addition, Olsher said people should be reading, studying and preparing for potentially hard conversations so they can correctly use specific terms and reference events.

“When you’re talking about race, you don’t say, ‘Oh, yeah, racism is bad,’” they said. “Talk about redlining. Talk about historical oppression. Talk about specific things and events that have led to the situation we have now.

“When you get beyond the level of just knowing what a phrase means, it shows engagement,” they said.

Choudhari-Stewart said online resources can help someone begin to understand concepts and other people’s experiences, but she said people must then use that knowledge.

“There’s a lot of education that you can get from social media,” she said. “How are you translating it into your life?”

What it means to be an activist

Whether people choose to engage in activism in any capacity, online or through in-person interactions, Noel said there will be criticism. She said both not posting online and posting a lot can be misleading when talking about how much work someone is actually doing.

Furthermore, Olsher said the frequency with which people post, and if and when they take breaks, can negatively affect their reputation.

“There’s this conception that, if you stop, like, posting periodically about something, or actively organize a protest, or if you take some time to take care of other things in your life, that you’re suddenly no longer an activist,” they said.

At the same time, Olsher said the word activist in itself is strange and can feed into people’s need to praise someone as a “hero” when they are just a person.

Olsher also said people must keep in mind the need for balance in life while advocating for change, an idea they took away from attending a Stonewall Youth Conference virtually last year.

“Once you’re labeled an activist, you kind of cease to be a human being, and your perception goes from being someone who’s passionate about something to someone whose entire life is something,” Olsher said. “An activist really is just anybody who cares about something enough to make an effort to further its development.”

Moreover, Olsher said it is important to engage in topics that do not directly affect or harm oneself. For example, Olsher said they recognize how being white passing has shielded them from learning about or talking about racism.

“In moments of stress, like during the summer, or like now, or when you have an injustice that you see, to be able to look at that and just say, ‘I don’t feel like I’m gonna get involved’ is a privilege that not everyone has,” they said. “It’s our responsibility to, especially when we hold that privilege, to use it to uplift people who are fighting for what they’re fighting for.”

Regardless of the work being done online to push for certain issues, Choudhari-Stewart said there must be simultaneous “tangible” progress being attained in actuality.

“For online activism to work, it needs to be a continued thing in conjunction with like, the things that you’re trying to change,” she said. “What different things are you trying to do? And how can social media complement it rather than being the sole form of activism?”