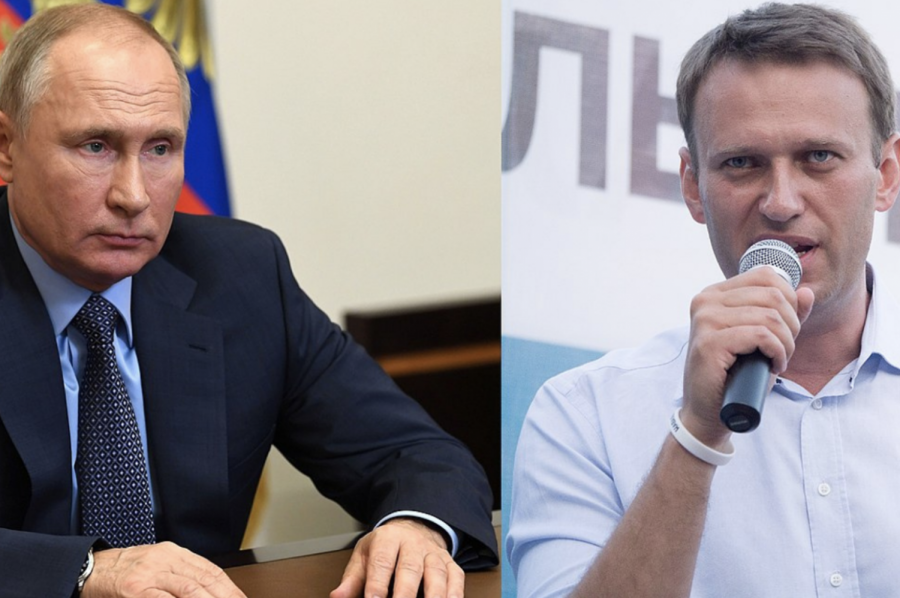 Alexei Navalny was sentenced to two years and eight months in prison Feb. 2 for violating house arrest while in Berlin. Russian citizens took to the street to protest in favor of Navalny and against Putin's corruption.

Navalny has accumulated a substantial following on social media. He frequently posts information exposing corruption within the Russian government, specifically related to Putin.

Due to his social media presence Navalny’s arrest resulted in widespread protests in which hundreds of thousands of people have marched in his support. The protests reached their height from Jan. 23 to 31, especially in Saint Petersburg and Moscow. According to CNN, police have detained over 11,000 people so far.

Gabrielle Yurin (’23), who is from Russia and is currently living in Moscow, said Navalny’s use of social media unites younger generations.

“The main generation here at play is young people – millennials, Gen Z – these are the people of the future, and they’re also the people that are so interconnected online,” she said. “Navalny’s involvement in social media and also the fact that he makes documentaries on YouTube, receiving a crazy amount of views, I think it’s so effective in spreading the word and keeping everyone updated.”

One example of his use of social media is in one of his most recent Youtube documentaries which received over 100 million views. In this video, Navalny asserts that Putin has a secret palace on the Black Sea that was gifted to him by a Russian billionaire. Navalny further alleges in the two hour-long video that the palace was built through the illegal use of state funds.

In addition, Anya Tchelikidi (’21), who is from Russia, said the video in which Navalny exposed Putin’s secret palace uncovers the president’s corruption.

“Publishing the video of like, showing Putin’s palace and kind of shedding a new light that got like, 100 million views or something, it was really eye-opening for everyone to see that kind of corruption in the Russian government firsthand,” she said.

According to the BBC, in August 2020, Navalny was on a plane to Siberia when he suddenly fell seriously ill, requiring immediate medical aid. The plane landed in Berlin, Germany where he received medical care. However, he was in a coma for two weeks.

Navalny’s doctors concluded that he had been poisoned by a nerve agent called Novichok – a controlled substance that can only be created in heavily funded laboratories owned by the Russian government.

Social Studies Teacher Becky Mason said utilizing the Novichok nerve agent makes it seem as though the Kremlin was trying to make a statement.

“The use of Novichok is so clearly the Russian government because they’re the only ones to use it, so I think they were sending a message,” she said. “They weren’t exactly trying to hide what they were doing.”

Navalny remained in Germany for the next five months, recovering and then investigating who was responsible for his poisoning. Navalny called Russian officials undercover and recorded them as they confessed about the use of Novichok.

According to the Guardian, the outcome of Navalny’s investigation concluded that his underpants were laced with Novichok in a covert operation ordered by Putin. Yet, Putin has denied any involvement, calling the allegations a “falsification”.

Eventually, Navalny returned to Russia Jan. 14. Upon landing, he was immediately arrested at the airport.

“He was arrested in customs, so it was literally immediately when he stepped foot in Moscow is when he was arrested,” she said. “It’s pretty obvious. I mean, if anything, it points more to the fact that Navalny was poisoned by the government, which is now proven.”

In addition, Yurin said Navalny going back to Russia is the ultimate act of bravery.

“It shows strength because if he hadn’t returned, it would almost be like, you know, another person defeated by the government,” she said. “But here is one of the most public critics of Putin, and he’s coming back almost to say, ‘This is not where the fight ends, this is where it begins,’ and I think there’s something really powerful about that.”

On the other hand, Mason said Navalny was in danger no matter what.

“It doesn’t really matter where he is, if they’re gonna poison him, they can pretty much get him anywhere,” she said. “I don’t think there’s any sense of like, safety being abroad, so I don’t think he has all that many good options anyway.”

Tchelikidi said the protests that ensued upon his return to Moscow are truly motivating.

“It’s really sad, but I think it’s also amazing to see people my age standing up and seeing the Russian youth trying to battle corruption in Russia,” she said. “They’re just normal people that are our age who are inspired by Navalny’s message and tired of corruption, and trying to make some sort of difference in the government structure of Russia.”

Moreover, Yurin said the protest creates a new atmosphere and outlook in Russia. However, she said standing up against the Russian government is usually met with a repressive response.

“My general thoughts, which is also amplified by the fact that I’m in Russia right now, is that there’s a sense of hope and almost pride in the fact that people have started to speak up about the corruption, finally, but also just kind of exhaustion from the fact that it’s the same thing every time where someone tries to do something and it gets shut down immediately,” she said. “It’s almost as if the country is not worthy of change, of opposition because it just gets silenced so early on.”

Furthermore, detainment centers for the protesters have denied the Russian citizens of their basic necessities, including cramming 20 people into a single cell. In Moscow and Saint Petersburg, detention facilities quickly ran out of space which resulted in detainees being forced to wait in buses.

Tchelikidi said the conditions in which the detainees were being held are horrifying.

“Seeing all the videos of young people our age being completely brutalized on the street is really heartbreaking to see, but it’s also really eye-opening,” she said.

Moreover, to reiterate the authorities’ control and power, Yurin said conditions were engineered to be purposely harsh.

“They didn’t know what was going on and I think that at this point, authorities were just trying to do whatever it takes to show authority,” she said.

Most recently, Navalny was presented to a Moscow court Feb. 2, and was sentenced to two years and eight months in prison for failure to report regularly to the police during 2020, as per the terms of a 2014 sentence that he violated.

The 2014 case involved embezzlement charges against Navalny and his brother Oleg Navalny, who was jailed for 3.5 years. Navalny got the same term but instead of serving the sentence in prison, he was under house arrest. However, his original sentence has now been converted into a prison term for not reporting to police consistently.

Navalny has already served a year under house arrest, hence one year has been deducted from his total. Navalny continues to deny the embezzlement allegations against him, stating that it was politically motivated and fabricated.

The European Court of Human rights found that Navalny’s human rights were violated in the original case in 2014. However, the Russian Supreme Court confirmed his conviction.

Tchelikidi said while she is disappointed in the state of Russia’s corruption, she is not surprised by the sentence.

“I mean, everyone knows it, like if you publish an expose on Putin’s corruption and you broadcast it to 100 million people, completely bravely as well, obviously Putin is going to do something about it,” she said.

Looking toward the future, Yurin said while these protests shed new light on the corruption in Russia, nothing tangible will be accomplished.

“I can’t say at this point that things are going to change, because it’s not like in the U.S. where it’s 50/50 and there’s a real fight happening,” she said. “Here is just like authority versus the people, and that’s a really hard battle to win.”