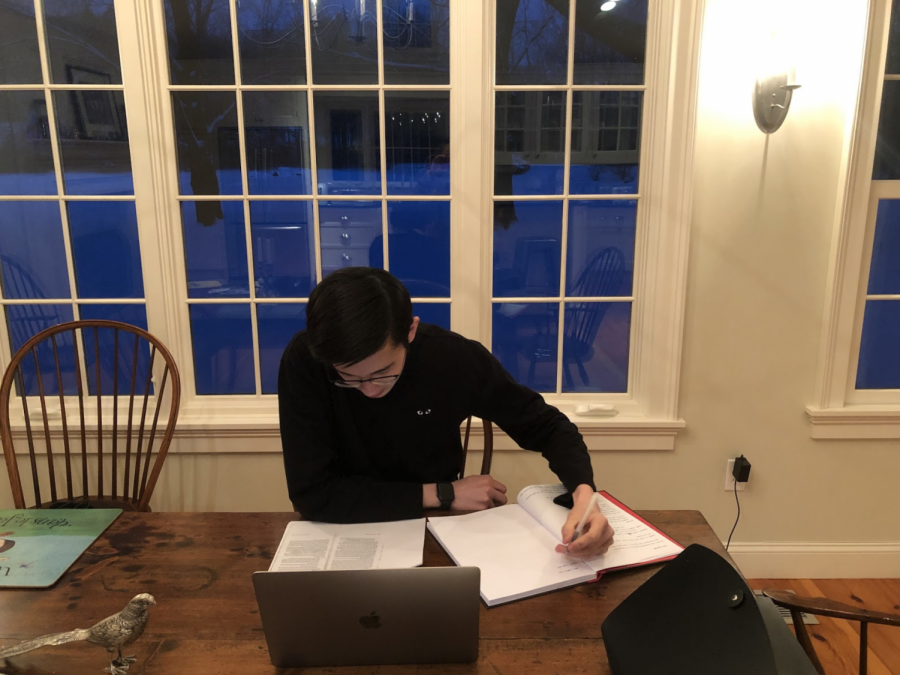 William Iorio (’22) revises for a class at 6:30 a.m. in Connecticut, equivalent to 11:30 a.m. in London. As all students are expected to attend synchronous Zoom classes, Iorio begins his classwork before dawn.

As a result of lockdown beginning at the end of winter break, and thus the shift to the Distance Learning Plan, many students are doing school from various locations.

The DLP system requires teachers to schedule more mandatory Zooms per week, in contrast to last year, and classes are only carried out on U.K. time, GMT.

Zain Rafiq (’24) said the changes made to the DLP give online learning more of a sense of normalcy and structure in comparison to last year.

“This DLP definitely feels a little bit more rigorous,” he said. “It feels a bit more like actual school.”

Likewise, William Iorio (‘22) said this DLP in lockdown has been easier to adapt to compared to the first lockdown, in which he was in London.

Rafiq said he spent winter break in Pakistan, and his family chose to stay there for the duration of the U.K. lockdown despite being in a timezone five hours ahead of London.

“Over the holiday, we decided to come here because all of our family is here,” he said. “COVID’s not really too big of a problem. The timezone is actually probably my favourite advantage, that school starts at 1:45 p.m.”

Meanwhile, Iorio is in Connecticut, which is five hours behind London. He said that he has adjusted well to the time difference while in another location.

“I’ve gotten used to it just because my body adjusted fully at U.K. time so I don’t have any issue waking up or going to sleep,” he said.

However, some students struggle with doing school in different time zones more than others.

Raquel Dawson (’22) is spending lockdown in Utah, and she said being seven hours behind makes it challenging for her to concentrate in class, especially during assessments.

“It definitely makes me a lot more tired when I’m in class, so a little bit less capable to fully learn, especially when it’s the first two classes,” she said. “Also, I am not really capable of taking a test during that time because I’m so tired.”

Despite multiple difficulties, Dawson said teachers have been understanding about the time difference. Some accommodations made by teachers include allowing Dawson to take tests at different times in the day and not requiring her attendance at every Zoom.

“I attend all the Zooms anyways, but it’s nice to know that if I one day was just really not capable of waking up early, they’d be there to help me catch up,” she said.

Similarly, Sarah Dalloul (’23) said teachers have been very supportive of her being in a different country during DLP. Her family went to Lebanon over the winter break, and after the announcement of London’s lockdown, they stayed there.

Nonetheless, Dalloul said that as a result of this sudden change, she was unprepared for school and did not have the right materials at the start.

“I just warned my teachers, I told them ‘I’m in Lebanon, and I think I need some time to get all the materials that are needed,’” she said. “They totally understand my situation.”

Additionally, Dawson said she likes the new schedule that was implemented during this lockdown.

“It’s nice on Wednesdays to be able to have a late start because then I can get an extra 45 minutes sleep, which in the end does actually do a good amount,” she said.

Furthermore, Dalloul said that although Lebanon has some COVID restrictions, there are not as many as in London, and she has become accustomed to it.

“Even though there is lockdown here, it’s like our home, so we’re used to it,” she said. “Here I can spend time with my family. I can see a few of my friends.”

Similar to Dalloul, Iorio said that where he is in Connecticut is not under tight restrictions, meaning he can spend more time with other people, specifically outdoors.

“We’re not in lockdown here so we can still do sports outside and see friends outside,” he said. “Generally the quality of life is a little bit nicer.”