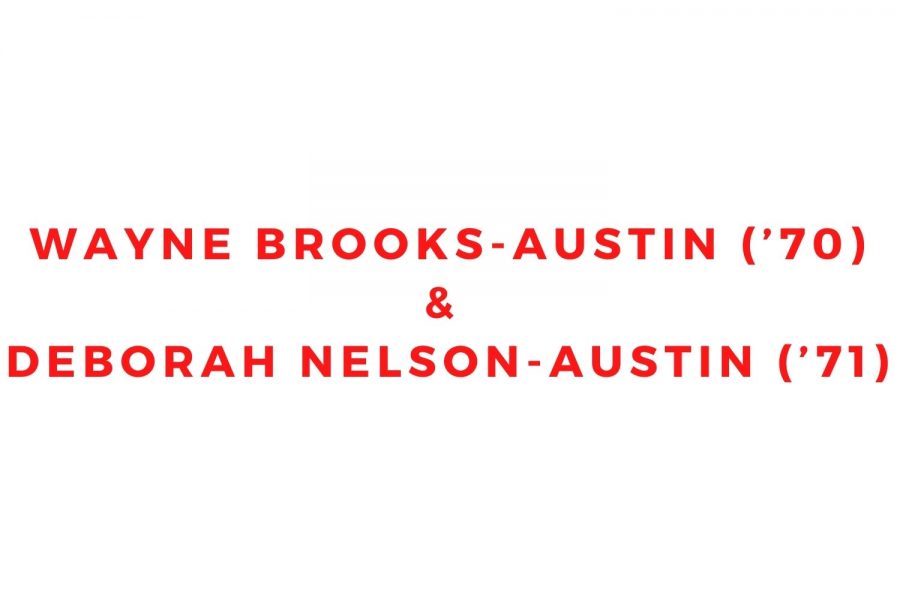 Wayne Brooks-Austin (’70) and Deborah Nelson-Austin’s (’71) relationship is founded by their shared experiences at ASL and their common faith in God. They met when he was in Grade 12 and she was in Grade 11 on a school trip. They soon developed a strong friendship, leading to their marriage during their freshman and sophomore years of college. They said their London years had huge impacts on their lives.

Wayne: Well, I moved to London in the summer of 1969. Deborah was already there. She had been there for her sophomore year already. I guess before I got there during the summer, word got out that there were some new guys in town. I have an identical twin brother so it was kind of unique. People were curious to meet us. School started and we didn’t have classes together being different grade levels. The Working Men’s College in Camden Town was our campus and we had a big room that they called the Commons Room where we would hang out during break times and study hall times. That’s basically where we got to know each other.

Deborah: And then early in the year, we took a weekend bike hike with one of our school teachers. I had done this the year before with two of my best friends and Ms. Dornbus who was an algebra teacher. They took three girls, me and two girlfriends, Wayne and his twin, and then Larry Quimby went with us on a bike hike. So we weren’t dating yet, but we got pretty interested in each other that weekend.

When did you start dating?

W: You know, we went on that bike hike. And then when we came back, we knew we were interested in each other. And we had a pub that all the kids hung out at, so we agreed to meet there one night. It wasn’t an official date, but we knew we were both going to show up there. It was kind of funny because I walked there with my friends, Larry and my brother and others, and we got there and we were waiting outside, and this limousine pulled up to the curb. Then the chauffeur gets out, opens the door and Deborah gets out of the back of the limousine and she’s got on her rabbit fur coat and black crepe pantsuit. I remember it well.

D: He could tell you what is in my closet now.

W: I was pretty impressed. Later on, we walked over to another friend’s flat. She was having a party there and so we went there and kind of hung out together. The first date that I actually took her out on was probably a couple of weeks later. I don’t remember the exact timing of it. It was Simon and Garfunkel in concert at the Royal Albert Hall. It was a memorable occasion for sure.

Left: Wayne Brooks-Austin (’70) and Deborah Nelson-Austin’s (’71) live in Montgomery, Texas. They adopted twins in 1982 and ensured that their kids had an international life similar to their time at ASL.

Right: Wayne Brooks-Austin (’70) and Deborah Nelson-Austin’s (’71) have fond memories of their high school experience. They loved exploring London together and tried to enjoy everything the city has to offer.

W: I thought she was very beautiful and exotic when I first saw her. I was probably scared of her.

D: I thought he was very cute, good-looking and got my interests. I thought he was aloof but not unfriendly. A bit aloof. And I thought, “oh he’s probably had it all, all these girlfriends,” which was not the case. I found out later that he sort of masked his shyness by being aloof and sort of mysterious.

W: Well, we had interest in each other. I was pretty shy and the fact that she was showing interest in me was my attraction to her. She would actually pay attention to me.

D: We had our common faith in God and attending church together and being part of the youth group. There was a group there within the school, kind of a group of Christian kids who went to church and Bible study together and so we were part of that.

W: And we enjoyed sports, you know, getting out in parks together. Like football and baseball out in Hyde park on the weekends. We both enjoyed being athletic and still do. Well, we are still active playing golf, pickleball, cycling, and we dance.

Did you go to prom together?

W: Yes, she was on the prom committee for the year and they would do all the planning and hosting for the graduating senior class. So they would plan the party and do all that. My senior prom was held at the Dorchester Hotel ballroom on Park Lane. They had Wishbone Ash which was the band. We had a Rolls Royce limousine that picked me and my brother up and our dates. Deborah had an after prom party at her flat. I think me and Tim Fullam left her flat at about 11 o’clock that next morning.

We had a big room that they called the Commons Room where we would hang out during break times and study hall times. That’s basically where we got to know each other. ”

D:  And my parents were there the whole time.

Where did you depart after high school?

W: I went to the University of Texas in Austin and Deborah was still in London finishing her senior year. So I came home for Christmas and summer. After that freshman year of college, I came back and spent the summer in London working and seeing Deborah. At the end of that summer, I went back to Texas and Deborah wound up going to Boulder, Colorado for a year at the University of Colorado.

D: I ended up at Colorado. They gave an early acceptance later in the spring. I got one from UT, but my dad had already spent some money and at the time it seemed like a lot of money. I don’t know if it would’ve been better. It was a struggling freshman year for me.

W: She went through a lot of adapting being in the U.S. For me, I had only been away for a year, so it wasn’t that big of a deal. But then we were apart for that year and that was hard on both of us. Lots of letter writing back then. That was before we had the internet.

We had such great experiences in our London years. Even though mine was fairly short, it had a huge impact on my life and we just wanted our kids to experience more of the world than Houston, Texas. ”

D: And phone calls were expensive.

W: So, after my sophomore year and her freshman year, we said enough is enough. She left Colorado and came back to Texas that summer. We moved in with her grandmother and we got married at the end of that summer.

D: During that summer Wayne’s parents were in the process of moving back from London to Midland, Texas. My parents still lived in London. At the beginning of the summer, I flew back to London. I insisted on having my wedding dress from London. We wanted to get married in London because we went to church together there, but we have too many stateside family members that would not have been able to make that trip. I did get a dress in London and then my mother and I flew to the U.S. with my grandmother.

We did the wedding planning and then Wayne and I started looking for churches in the Houston area. We were having trouble finding one we really liked. It had a lot to do with just the look of the church and the architecture. And then I said, “well, you know, I really liked the church.” I was born in Baytown, Texas and I just remembered that I really liked the church we attended. There were really pretty stained glass windows and stone. And so we went to check it out and it was available. We wound up selecting that church and also making sure the pastor there was okay with it. Then, I had bridesmaids flying in from different places.

W: When we got married I was 20. I was two months past my 20th birthday and she was 19 when we got married and we now have twins – a boy and a girl. They are now grown and they’re 30. We adopted them when they were five days old in 1982. We had a pregnancy but Deborah was very ill and had a condition called Crohn’s disease. The baby was born premature and too young to make it, so we only spent a few hours with him. We thought that she couldn’t get pregnant after that because of internal damages, so three years later we adopted the twins.

Did any of your kids go to ASL?

A strong foundation of our relationship is that we’re really best friends. So we have a real friendship quality that was there from the beginning. It also grows stronger over time.”

D: No, but they had an international life.

D: We had been praying for an international opportunity.

W: We had such great experiences in our London years. Even though mine was fairly short, it had a huge impact on my life and we just wanted our kids to experience more of the world than Houston, Texas.  We didn’t know where, I mean, Muscat, Oman probably wasn’t the first place that came to mind. When the opportunity came up, we learned a little more about it and said yes. Then we went to Saudi Arabia after that for another four and a half years.

W: I think, enjoy your time together there. One of the things we tried to do was experience the country and what it had to offer. Bike hikes, we went to museums, we went to the theater. You know, rode around the city on bicycles, played in the parks. So spend time together enjoying what England has to offer. And find out what you have in common. What do you like doing together through those activities? You will establish a friendship. Not every high school couple is going to move on to marriage.

D: And a strong foundation of our relationship is that we’re really best friends. So we have a real friendship quality that was there from the beginning. It also grows stronger over time.